President of Ukraine Meets with the Ukrainian Community in NY

On September 23, 2008, His Excellency the President of Ukraine, Victor Yushchenko joined with various world leaders in addressing  the United Nations General Assembly, in matters pertaining to not only Ukraine, but  the challenges faced by a world whose very security is threatened by terrorism, and the recent political instability between sovereign Georgia and Russian Federation.

President Yushchenko acknowledged the presence of the Church in his opening remarks and informed the 100 invited guest of the progress being made by Ukraine in the field of language, noting the steady growth of Ukrainian as the official language of free and independent Ukraine. His Excellency noted Ukraine’s economic stability, the progress made in steps to normalize the life of the Orthodox Church in Ukraine, which will lead to an independent local or “Pomisna” Church and his personal conviction that such normalization will be realized in the future. As a testimony of this, His Excellency noted the recent visit of His All Holiness, Bartholomew to Kiev for the 1020th anniversary of the Baptism of Ukraine and the optimistic tone set by the Patriarch’s visit.  The President stated that much activity, which cannot yet be revealed, is currently taking place toward the goal of Orthodox unity in Ukraine. 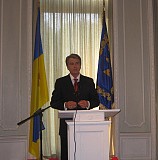 President Yushchenko further stated that Ukraine cannot progress as an independent nation until she has her own honest history completed.  The history of the nation must be written reflecting the view of Ukrainian perspective rather than from the perspective of other nations, which have in any way been related to Ukrainian history.  For example, the story of Ivan Mazepa must reflect his perspective, along with the entire Cossack command, rather than either the Swedish or Russian perspectives.  Efforts are currently solidly under way to complete this comprehensive history from pre-Scythian times through modern day Ukraine – through four and now the fifth and final attempt to achieve independence - and will include all those “heroes” of Ukraine, once labeled traitors by the various occupiers of Ukrainian territories..

His Excellency thanked the Ukrainian Diaspora community for its preservation of the totality of Ukrainian culture, language and history and, among other things, requested that Ukrainians in the USA share with Ukraine any and all literature pertaining to the Genocide of 1932-33 and other important events from Ukrainian history little known to modern day Ukrainians because of the Soviet repression and oppression.

Following the President’s presentation several medals of honor in various degrees were awarded to Ukrainian community leaders who have “served the interests of Ukraine in making her history and culture visible to the world”.  President Yushchenko remained at the Institute to exchange brief comments with several of those present, including Archbishop Antony and Bishop Daniel.

Latest News
00000
Axios! Metropolitan Antony Celebrates 9th Anniversary of his Enthronement as Metropolitan of the UOC of the USA
00001
Statement of the Council of Bishops of the UOC of the USA: Pray for Ukraine!
00002
UOC of the USA Participates in the 49th Annual March for Life in Washington, DC
00003
Assembly of Bishops’ Delegation Opens March for Life Rally in Prayer
00004
Prayerful Feast of Theophany at the Metropolia Center of the Church
00005
12 February, 2022 - JOIN US for the Celebration of St. Sophia Seminary Chapel Patron Feast Day
00006
Souper Bowl Sunday 2022 is FEBRUARY 13, 2022!
Pastoral Reflections
00000
«Покайтеся, бо наблизилось Царство Небесне»
00001
Іван Хреститель - Голос Вопіющого в Пустині
00002
On the Baptism of Christ
00003
The genealogy of Jesus Christ
00004
Наближається Різдво...
Upcoming
00000
Archbishop Daniel's Liturgical Schedule
00001
Month of JANUARY in the Life of the Church - Місяць СІЧЕНЬ в житті Церкви
00002
Pre-order your 2022 Calendar - Замовляйте ваш Календар 2022
Recent Galleries