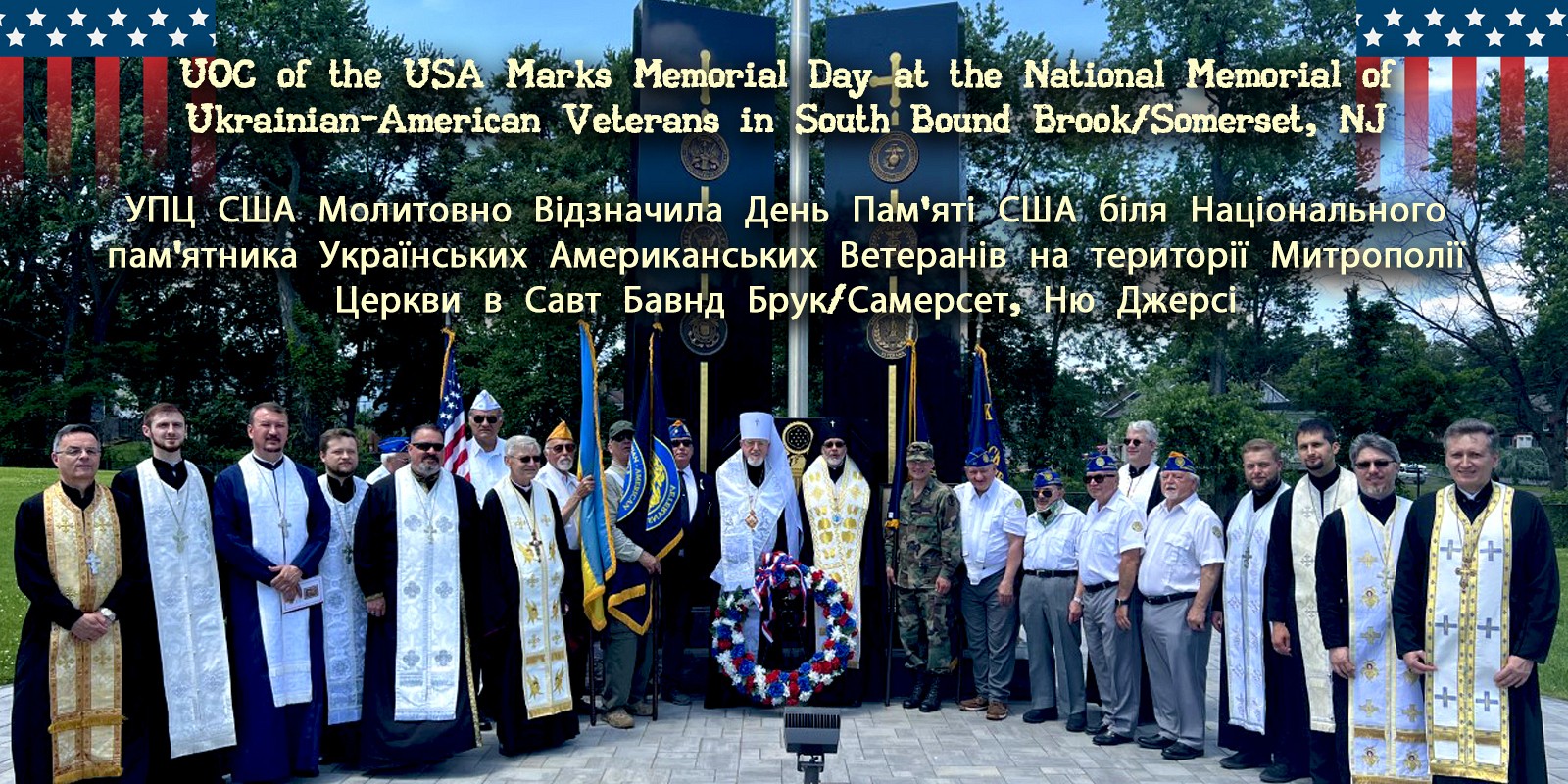 On May 30, 2022, as the United States of America celebrated “Memorial Day”, the faithful gathered at the St. Andrew Memorial Church located in South Bound Brook, New Jersey to honor the fallen heroes who sacrificed their all to ensure the rest of us could live in freedom.  Standing in the shade of the trees, wrapped in flags of the United States and Ukraine, the faithful watched as the Ukrainian American Veterans formed a line and stood at attention near the Veteran’s Memorial on the grounds of the church.

As a brisk breeze blew, causing the flags of the United States and Ukraine to snap sharply, the bells began to toll as the church doors opened and dozens of local clergy descended down the steps, followed by the hierarchs of the Church, His Eminence Metropolitan Antony, Prime Hierarch of the Ukrainian Orthodox Church of the USA and Diaspora, and Archbishop Daniel, Ruling Hierarch of the Western Eparchy.  The hierarchs were followed by the seminarians of the St. Sophia Ukrainian Orthodox Theological Seminary.

As the clergy approached the monument, the veterans paraded in, holding the flags of the United States, Ukraine, as well as those of all the various Military Branches.  As they took up their positions, the clergy created two columns flanking the hierarchs who approached the podium.  As the faithful drew near, Metropolitan Antony loudly proclaimed, “Blessed is our God, always, now and ever, and unto the ages of ages!” which was followed by “Christ is Risen!” sung thrice in both Ukrainian and English.

“O God of spirits, and of all flesh, who has trampled down death and overthrown the Devil and given life to Your world: Do You, the same Lord, give rest to the souls of Your departed servants in a place of brightness, a place of refreshment, a place of repose, where all sickness, sighing, and sorrow have fled away. Pardon every transgression which they have committed, whether by word or deed or thought. For You are a good God and lovest mankind; because there is no man who lives and yet does not sin; for You only are without sin; Your righteousness is to all eternity; and Your word is truth. For You are the resurrection, the life, and the repose of Your servants, who have fallen asleep, O Christ our God, and unto You we ascribe glory, together with Your Father, Who is from everlasting, and Thine all-holy, good, and life-creating Spirit, now and ever, and unto ages of ages.”

As the service concluded, His Eminence Metropolitan Antony turned to those gathered and spoke a few words.  He stated that we have come here as we have for many years, gathering at this monument, and he is pleased to see so many people here this day for this Memorial Service.  He continued by expressing that we commemorate all those who died in service in defense of our nation, throughout the many wars which our nation has been involved in various wars and conflicts – WWI, WWII, the Revolutionary War, the Civil War and so many others which we participated in and were forced to fight in, to the existence and freedom of these United States.  These people stepped forth and offered their very lives.  We live in a nation where we can think and act and pray anytime we want and anywhere we want, and this privilege has been passed down from generation to generation to generations throughout all the centuries of existence of our nation thanks to those who fought and died for our freedom.

Metropolitan Antony continued by stating some inconceivable facts.  His Eminence had done some research and the numbers of men and women who had laid down their lives to ensure our freedom are staggering.

These are not small numbers.  These are the people who have created the conditions for us to live the lives which we live today.  We express our love and our gratitude to them this day, and each year for their willingness to serve their nation, to defend our freedom, and to lay down their lives for independence.  Some of these individuals were so young that they could not have contemplated what they would face; some as young as 14 years of age, willingly signed up to defend their nation.

People stopped their lives to fill the need to go abroad to serve for the welfare of the rest of the citizens of this great nation.

This is a powerful day which has been set aside for this remembrance and it is one we cannot ever fail to serve.  For the veterans who are here today to honor their compatriots who were lost we thank them for their service, as well.

His Eminence thanked everyone for participating in today’s moving service.  He thanked them for remembering those who have died, who have sacrificed of themselves for us.

Next, Consul General of Ukraine in New York, Honorable Oleksii Holubov stepped up to the microphone.  Greeting those gathered before him, he stated that it is an honor to be at the heart of Ukrainian Orthodox in the United States.  The USA is a sign of freedom throughout the world.  This day has been set aside to honor fallen veterans over 50 years ago.  It is vital to remember all who sacrificed their lives for their families, for their nation, and for all future generations.

This is what Ukraine is currently facing, and wishing to achieve – freedom for future generations.  He stated that Ukraine is grateful to the USA for their support, and their solidarity with Ukraine as she fights to retain her independence.

He concluded by thanking all veterans, and expressing that in today’s ongoing war, Ukraine will win, and then they too will honor their fallen heroes who gave their all to secure independence for all the people of the nation.  Glory to all fallen heroes.  Glory to Ukraine.

Next, the representative of the Ukrainian-American Veterans, a retired Lieutenant Colonel Michael Hrutsak stepped up to the microphone expressing that they are here to honor all who gave their lives for our liberty and freedom.  He stated that Ukraine finds herself in a special position, as she currently fights for freedom, and her defenders give their lives in this modern battle for independence.  The Colonel expressed how he had recently visited wounded soldiers in Ukraine and they were brought to tears when they realized that people beyond the borders of Ukraine were aware of the war.  The war which the media began to cover in February of this year, has actually been fought for the past 8 years, and even in 1918.  He concluded by stating that today we memorialize the fallen American veterans, but, we also honor the current veterans in Ukraine who are defending the world.

A wreath of remembrance was placed before the Veteran’s Monument, the colorful red, white, and blue ribbons waving in the breeze, as TAPS was solemnly played, echoing throughout the neighborhood, and carried on the wind to the St. Andrew’s Cemetery behind the church where many veterans were resting in their graves.

As the final, somber notes faded, His Eminence Archbishop Daniel stepped up to the microphone.  He thanked everyone for their presence at this solemn occasion, and explained a bit about TAPS.  The melody did not exist until the Civil War, when it replaced the standard “end of day” tune which was played each evening, and followed by the tapping of drums.  A general decided it was time to change the melody and a brigade bugler composed this simple 24 note tune which replaced the previous bugle call.  Not long after Butterfield created “Taps,” it was played for the first time at a military funeral, for a Union cannoneer killed in action. The man’s commanding officer, Captain John Tidball, decided the bugle call would be safer than the traditional firing of three rifle volleys over the soldier’s grave, a move which couldn’t been confused by the nearby enemy as an attack.  The bugle call is now used at all military funerals.

His Eminence reminded everyone that today, as per the President of the United State’s request, from Arlington and throughout the country, the nation is to pause at 3 PM to sound the bugle call, whether played on instruments, hummed or played over loud speakers.  Archbishop Daniel asked everyone to remember to pause at 3 PM, play a version of TAPS, and remember all the fallen men and women who fought to allow us to live in freedom this day.

As final photos were taken the clergy and faithful headed across the way under the shaded trees to enjoy a simple picnic, following a longstanding American custom, to remember the lives, and honor the deaths of those who sacrificed their all to ensure future generations could enjoy freedom.

May the Lord remember in His Kingdom all the fallen warriors from all the wars.  May their memory be eternal.  Christ is Risen!

UOC of the USA Marks Memorial Day at the National Memorial of Ukrainian-American Veterans in South Bound Brook/Somerset, NJ