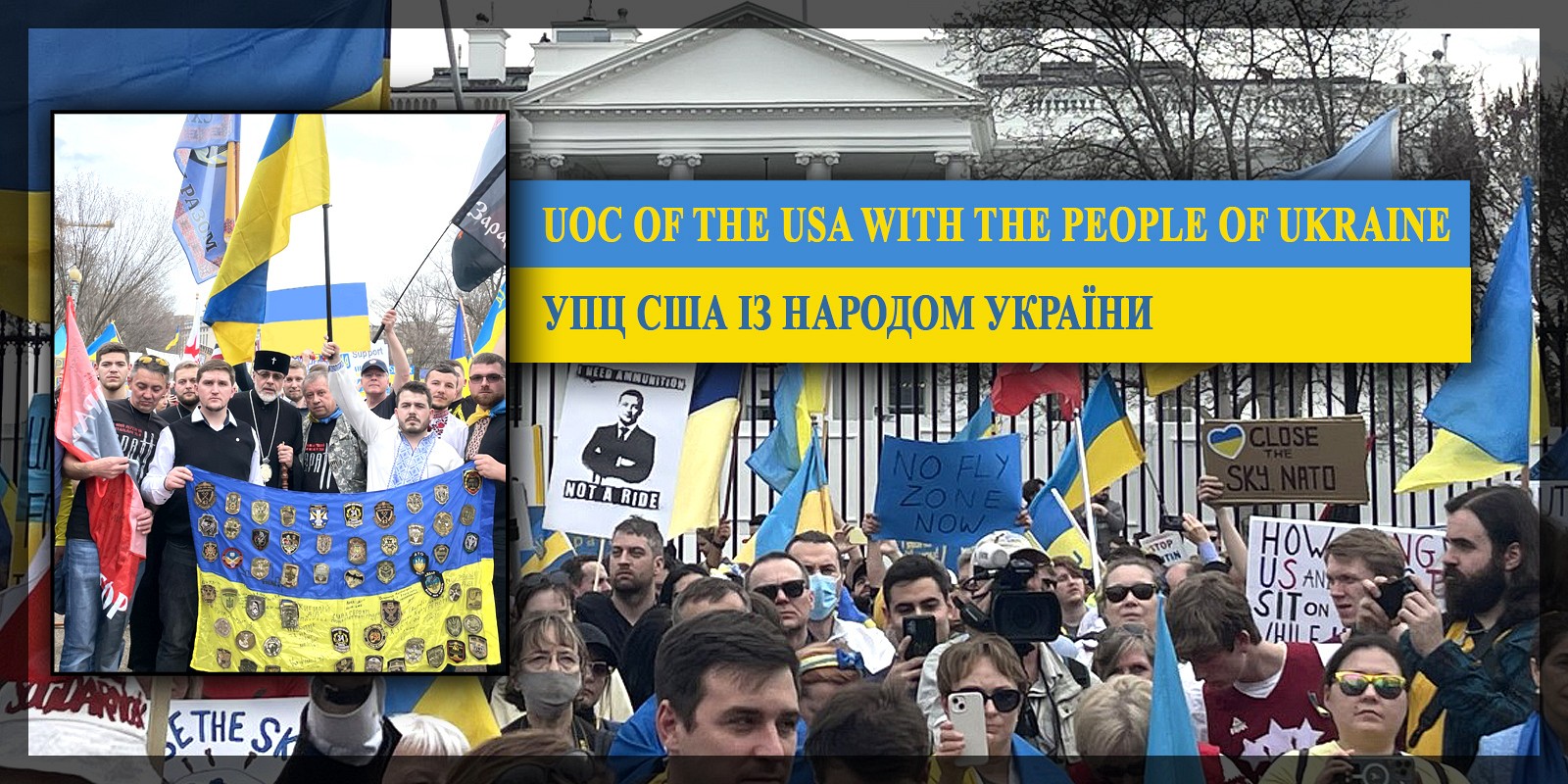 Over a thousand Ukrainian-Americans and supporters gathered outside the White House in Washington, DC for a peaceful rally in support of Ukraine and against the aggression of the Russian Federation.

On a bright Sunday afternoon, March 6, 2022 - just outside the White House fence, the demonstrators gathered about 2 pm in Lafayette Square appealing to the government of the United States of America, NATO nations and the rest of the world to do more to stop the war against Ukraine that was declared by the Russian President Vladimir Putin. Hundreds of flags of Ukraine, USA, Poland, Lithuania, Latvia, Estonia, Uzbekistan, and other nations were proudly raised and held above the crowd as people shouted “GLORY TO UKRAINE – SLAVA UKRAINI!” and “Stop the war, Defend Ukraine now!”

Numerous politicians and religious leaders addressed the people in attendance, offering their thoughts and prayers for the people of Ukraine.

Archbishop Daniel led a delegation of Ukrainian Orthodox Christians at the rally, and together with the Rabbi Avi Weiss, Fr. Volodymyr Stelaik (pastor of St. Andrew Ukrainian Orthodox Cathedral of Silver Spring, MD), Fr. Mark Morozovych (Dean of Theology of the Catholic University of America) offered the prayer for Ukraine.

Vladyka Daniel addresses the rally, reflecting on a powerful words of the American civil rights movement leader Martin Luther King Jr, who deliver a public speech “I have a dream” on the steps of the Lincoln Memorial on August 28, 1963. Archbishop Daniel stated: I also have a dream… that Ukrainian children will not be afraid to look up into the sky because of the flying rockets and bombs; I have a dream, that that elderly will not have to hide in basements of their homes and bomb shelters; I have a dream, that the evacuated 1.7 million people will have a chance to return back to their homes and live THEIR dream – their lives; so, I say to all of you let’s appeal to our government and all NATO nations – PLEASE, SAVE UKRAINIAN LIVES! PLEASE, answer to the appeal of Ukrainian President and the people of Ukraine, declare a NO-FLY ZONE over Ukraine!...”

Among those in attendance, were numerous representatives of the diplomatic community of foreign nations in the US.

Former Ambassador of the USA to NATO Kurt Volker; US Senator from Ohio Rob Portman (R) and Ukrainian community leaders and foreign dignitaries addressed the rally, all condemning the slaughter of innocent lives and the invasion of Ukraine by Russian Federation.

In conclusion of the formal program, seminarians of St. Sophia Ukrainian Orthodox Theological Seminary of the UOC of the USA (South Bound Brook, NJ) called upon those in attendance to pay prayerful respect to the memory of the fallen men and women of the Armed Forces of Ukraine and numerous innocent civilians, while chanting the solemn and sober hymn in memory of the Heavenly Hundred “Plyve kacha to Tysyni…”

UOC of the USA With the People of Ukraine