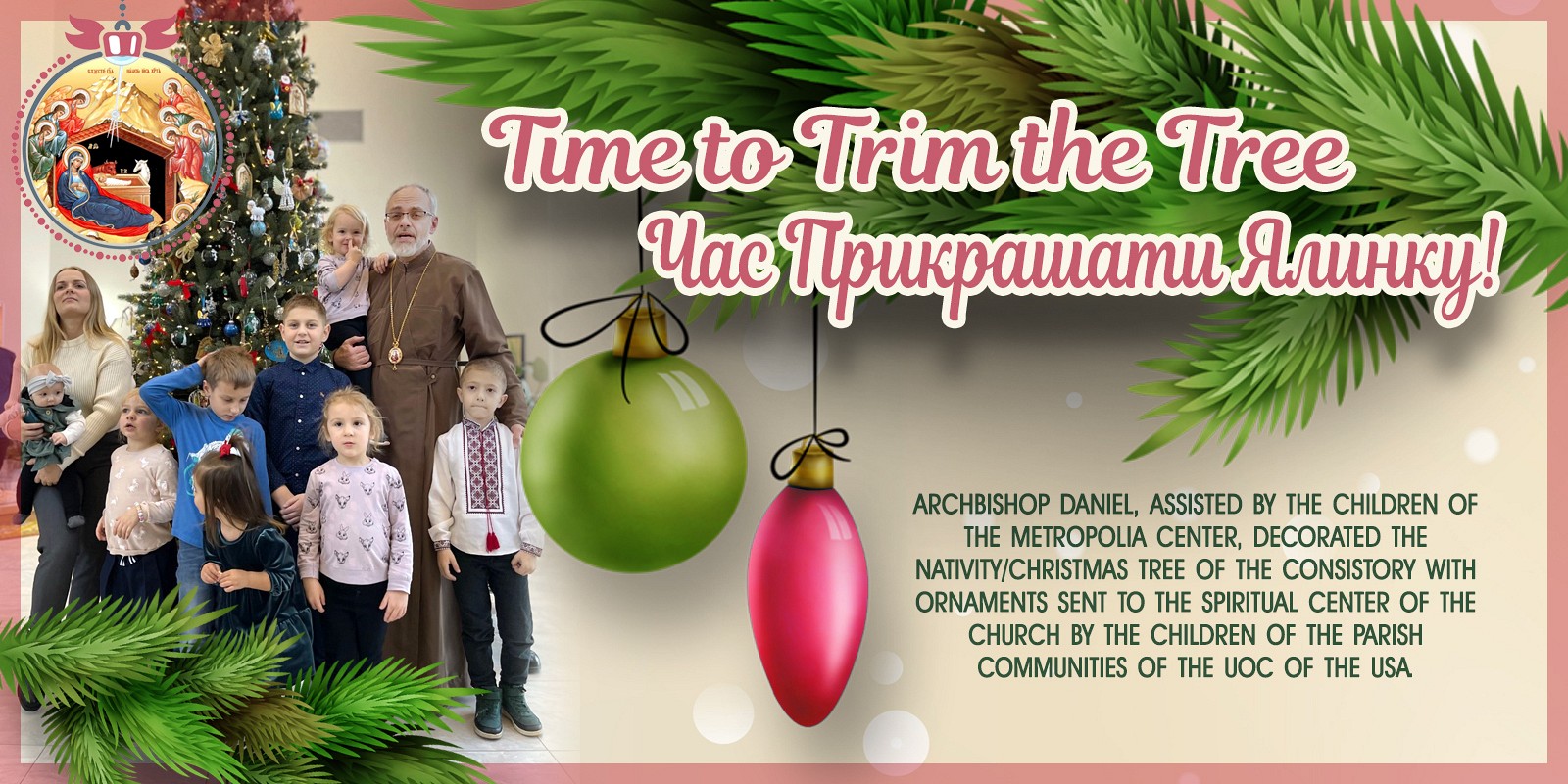 In the late afternoon of December 20th, 2021, the usually quiet and cavernous atrium of the Consistory Offices of the Ukrainian Orthodox Church of the USA, transformed into a magical Christmas scene.  In the middle of the tall atrium now stood a majestic tall Christmas Tree, its white lights twinkling an invitation for everyone to draw near.

In November, the call went out to the parishes of the UOC of USA, to submit ornaments to bedeck the Consistory Tree.  The request was published in parish bulletins, sent via emails, and posted on social media.  Many parishes, as well as individual families, got down to work, creating tiny masterpieces reflecting the joy of the Nativity Season, including:

Throughout the month of November and December the precious creations came pouring in via the US Postal Service, FedEx, USPS and personal hand delivery.  The office staff carefully sorted and stored the marvels until the day that they would be hung upon the tree.  That day was today, as His Eminence Archbishop Daniel, Ruling Hierarch of the Western Eparchy of the Ukrainian Orthodox Church of the USA, gathered staff members, clergy, and seminarians around the Christmas Tree.  The ornaments to be hung were already prepared with ribbons and hooks for hanging and laid out upon carts for ease of accessibility.

All seemed ready as the adults milled about the large room waiting for the helping angels to arrive.  In no time the quiet atrium, echoed with the pitter patter of tiny feet, and the giggles and laughter of children.  Joining their parents in decorating the tree were the youngest members of the Church:

Having chased each other around the tree until they were dizzy, the kids finally quieted down when His Eminence called them to attention.  He carefully explained to them that the Christmas Tree decorates our homes at Christmastime to remind us of the joy of the newly incarnated Christ Child.  The evergreen tree remains green throughout the winter when other trees have dropped their leaves and seemingly died.  This everlasting life is symbolic of Christ.  The star atop the tree represents the Star of Bethlehem which indicated the location where Christ would be born, leading the Magi to Him.  The Bible tells us to take up branches of trees, and to rejoice before the Lord our God.  Therefore, at this joyous time of the year, we decorate our homes with evergreen trees and boughs, hang bright lights and colorful baubles, and put candles in our windows, all to remind us of the newly born Christ Child.

Archbishop Daniel walked over to the ornaments and told the children to gently take them and hang them upon the green tree.  Picking up little Victoria, he lifted her high so she could reach one of the upper branches of the tree.  Frowning in concentration, she reached as high as she could and finally managed to hook a branch.  She slowly let go and watched the ornament bob back and forth on the branch.  Giggling she clapped her small hands joyfully and squirmed to get down and get another ornament to hang.

The atrium echoed with laughter and chatter as the parents of the children joined them in hanging the ornaments all around the tree.  Suddenly the seminarians broke out in song, singing Christmas Carols.  The others join in praising to the Lord and asking for peace upon the Earth.

While everyone worked diligently, the sun began to sink in the western sky, leaving a dark royal blue sky visible through all the glass windows surrounding them.  Against the darkening background the lights of the tree, the reflection of the baubles, and the smiles of the faithful shown ever brighter.

Suddenly, the final ornament was hung, and everyone stepped back to admire their handy work.  A communal sigh was heard as heads tilted in admiration, eyes sparkled, and lips curled up in smiles.  The tree was truly a masterpiece of creativity, as if the faithful of the Church had given a tiny piece of themselves to beautify the Church tree.  Robed in the glorious ornaments, the tree itself seemed to stand straighter and shine brighter.

His Eminence startled everyone out of their reverie as he clapped his hands and with an animated smile gathered the children and led them to the Seminary Library, located just off the atrium.  He mentioned that after St. Nicholas had visited them yesterday at the St. Andrew Memorial Church, he had stopped by the Consistory, and knowing that they would be helping decorate the tree, he left them additional surprises as gratitude for their service to the Church.

The children all clapped happily as their nostrils caught the scent of fresh hot pizza!  They clambered up on the chairs around the large table and eagerly bit into the warm and oozing pizza slices.  With cheese and sauce slathered over their chins, they happily chattered on about St. Nicholas, and how surprised they were that he would have known they would be there today.

As their parents wiped their faces, and cleaned their hands, the youngsters were drawn to the pile of packages that Archbishop Daniel had dragged into the library.  With eyes wide in anticipation, the kids hopped from foot to foot as they waited to be handed their gifts.  St. Nicholas had passed along dollies, stuffed animals, books, cars, and a variety of toys to these good children.  Having grabbed their packages the children immediately sat on the floor and ripped them all open, exclaiming in delight and showing each other what they had received. 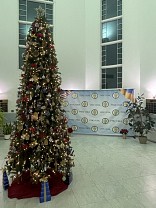 Having had a long day, and now with their tummies full, the children’s eyes soon became heavy as they tried to stifle yawns.  Their parents smiled at them, as they picked them up, received His Eminence’s blessing and began to pack up for the trip home.  Some of the youngsters were asleep before they even left the building, while others sleepily tripped over their own feet as their parents bundled them up and led them out of the building.  With final looks over their shoulders at the beautiful Christmas Tree, and double checking that they had their presents with them, the youngsters crawled into the waiting cars and zoomed off towards home.

The grand tree suddenly found itself standing alone in silence as the doors were locked for the night.  The lights upon the tree still sparkled brightly, their reflection multiplying upon all the windows surrounding the tree, making it look like the entire universe of stars revolved and twinkled around it.  As night fell, and darkness engulfed the Metropolia Center, the glowing Christmas Tree stood tall and proud, a beacon to all, announcing the upcoming Incarnation of our Lord.

Consistory Nativity Tree Decorated by the Youth of the Church