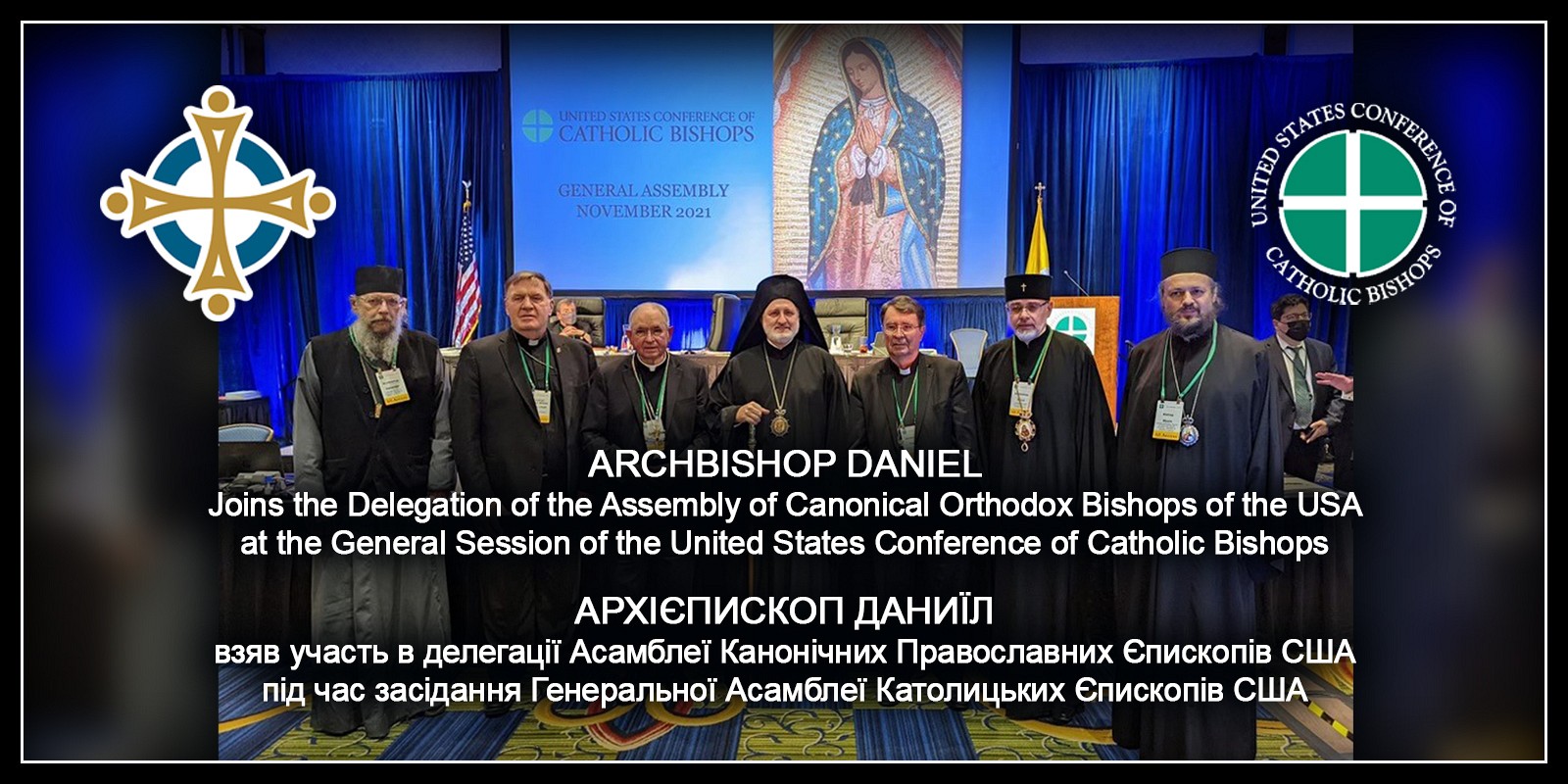 On November 16th, His Eminence Archbishop Daniel, Ruling Hierarch of the Western Eparchy of the Ukrainian Orthodox Church of the USA, arrived in Baltimore, Maryland, to participate in the General Assembly of the United States Conference of Catholic Bishops.  The USCCB is an assembly of the hierarchy of bishops of the Roman Catholic Church who jointly exercise pastoral functions on behalf of the Christian faithful of the United States and the U.S. Virgin Islands.

The meeting agenda included discussion on various Church topics, review of Financial Reports, and elections to fill the seats of the chairmen of various Conference committees, as well as a discussion on numerous charitable undertakings.

This marks the first time in the history of the USCCB, that Orthodox hierarchs have been invited to participate in their plenary session.  After the midday break, Bishop David P. Talley, of the Committee on Ecumenical and Interreligious Affairs, introduced His Eminence, Archbishop Elpidophoros.  Declaring, “Unitatis Redintegratio, the decree on ecumenism of the Second Vatican Council, states that Orthodox Christians ‘are linked with us in closest intimacy.’ Discerning the importance of demonstrating this intimacy, the bishops from the USCCB on the dialogue recommended that we invite representatives of the Assembly of Canonical Orthodox Bishops of the United States to join us at our General Assembly.” With this he invited Archbishop Elpidophoros to share his presentation with the gathering.

Particularly moved by the warm welcome, Archbishop Elpidophoros opened his remarks by saying, “I greet you with a salutation of hope and peace in our Lord God and Savior Jesus Christ. I would like to share my heartfelt joy to be with you today, my brother bishops of the USCCB, for the first time in the history of our Sister Churches’ relation in this country.” Reflecting on decades of rapprochement between the Roman Catholic and the Orthodox Churches, he also mentioned the current reflection undertaken by the Roman Catholic Church with regard to synodality. In closing, he declared: “I am convinced that the future and mission of Catholic-Orthodox relations in the U.S.A. is to continue to bear witness to God’s presence in the world, faithful to the Spirit of Jerusalem that we received as a legacy.”

After His Eminence’s well-received presentation, those gathered mingled and chatted during the break.  The members of the USCCB introduced themselves to the delegation from the Assembly of Orthodox Bishops and talked about common experiences, shared concerns about current events, and discussed mutual hopes for the future.

Having forged inter-Church bonds, the Assembly adjourned, as the hierarchs promised to work together to bring the message of Christ to the world.