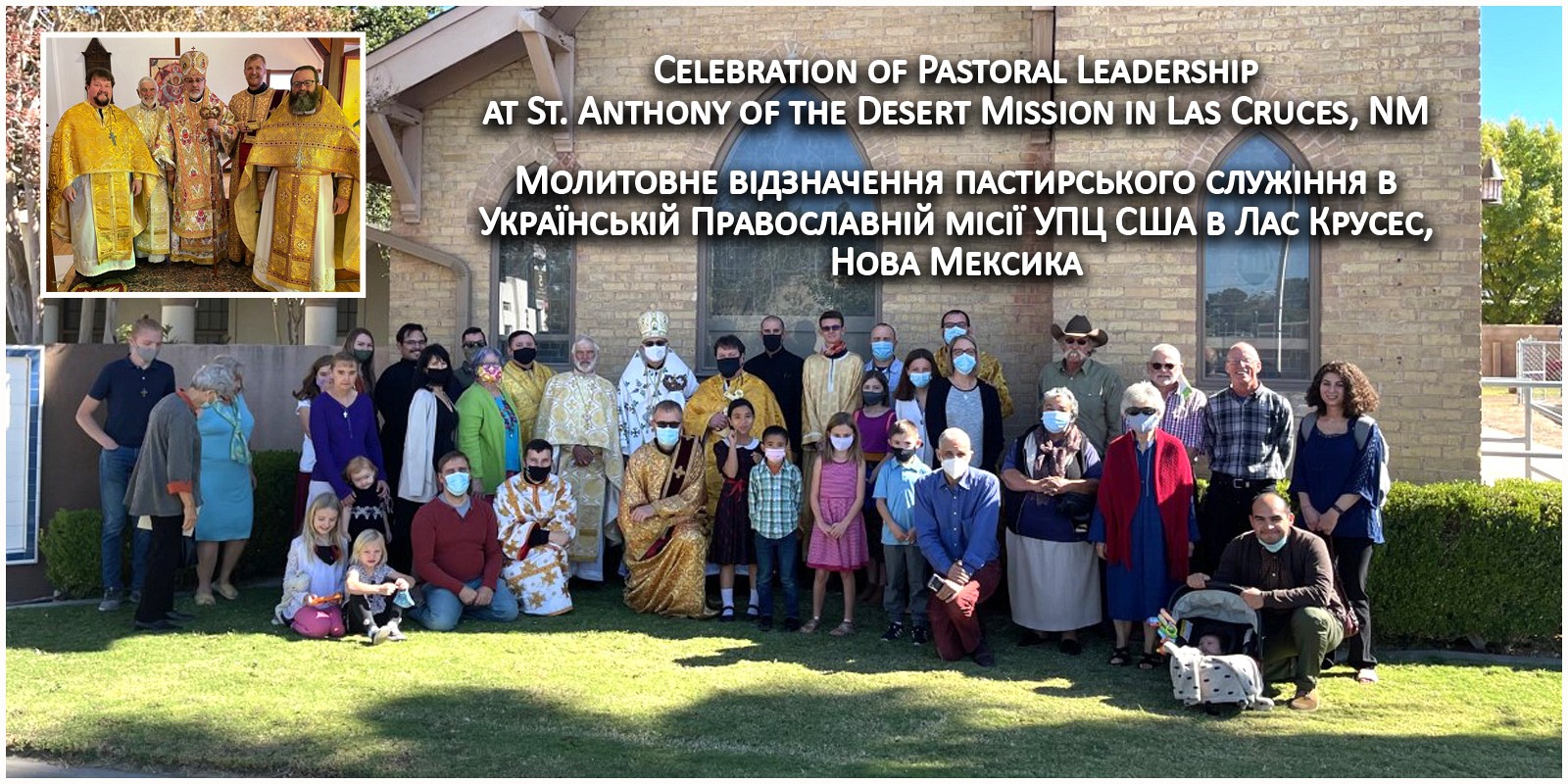 His Eminence Archbishop DANIEL arrived in sunny, warm Las Cruces, New Mexico, after a flight to El Paso Texas, on Friday October 22nd for the weekend festivities and liturgies.   Accompanying Archbishop DANIEL were two seminarians of St. Sophia Ukrainian Orthodox Theological Seminary of the UOC of the USA: Reader Andrii Vatrich and Reader Maksym Zhuravchyk.  They were met by Fr Mark Phillips, incoming pastor of St Anthony of the Desert and the retiring pastor, Fr. Gabriel Rochelle and Pani-matka Susan Steinhaus for a formal dinner and discussion prior to liturgical services and formal visit of the hierarch.

Following the meeting with Vladyka Daniel, Fr. Gabriel and Pani Susan were surprised beyond words by the unexpected appearance of the four adult children who live in the USA and spouses and, subsequently, by the appearance of his nephew and wife from Michigan.  One daughter who lives in Prague, Czech Republic, was understandably unable to attend.

Archbishop DANIEL presided at Divine Liturgy Saturday morning October 23rd, following a brief greeting by Fr. Gabriel.  In attendance were members of the congregation and some friends of Fr. Gabriel and Pani Susan who came to honor the outgoing pastor at this Liturgy.  Archbishop gave a blessing to Fr. Gabriel to preach at this service, which was a Memorial Saturday, and the sermon was preached on the significance of our remembering those of family and friends who have been influential in our lives.  Beyond those circles, however, we need to acknowledge that we are part of a larger family, the communion of saints which spans this world and the next and from whom we also derive succor, comfort, and examples for our lives.  Fr. Theophan and Pani Kristi Mackey of Job of Pochaiv parish community in Los Alamos, NM were also in attendance.  Fr. Theophan met Kristi and became Orthodox at St. Anthony of the Desert mission and subsequently attended seminary.

During the Liturgy on Saturday, Archbishop DANIEL presented Fr Gabriel with an ecclesiastical jeweled cross in honor of his ministry of developing St. Anthony mission, which grew over the fourteen years of his pastorate from two people to about seventy-five.  Pani Susan was also recognized as a major force in the development of the mission as well. 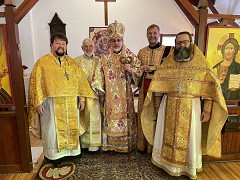 Fr. Mark Phillips, assisted by Deacon Theodore Brineger led Great Vespers on Saturday evening at 5:00 PM.  Vladyka DANIEL spoke following Vespers on the necessity of witness in the modern world and our calling to witness by our actions as Orthodox Christians.

Following Great Vespers the congregation gathered in the parish hall for a festive dinner.  The traditional greeting of Archbishop DANIEL was transposed to the beginning of the dinner, as which time Sharon Italiano, board president, welcomed the Archbishop and 12 1/2 year old Isabel Encapera, first child baptized at St. Anthony, presented him with bread and salt.  Lia Davenport, Ruby Encapera, Esther, Charity, and Karina Brinegar all presented Vladyka with flowers.

The Festive Dinner, at which Fr. Gabriel and Pani Susan were honored, and Fr. Mark was welcomed officially to the congregation, was prepared by Dr. Anna Laliotis with assistance from Joseph Suter and Cesar Cardona.  Blake Davenport, long time council member, who met his wife Louiza Fouli and was chrismated at St. Anthony, was master of ceremonies for a delightful program of entertainment showcasing the talent of members and friends.  Among the great acts were the Brinegar family string trio, songs by Latino members and friends, a solo by Katherine Davenport, and a Greek Dance.  Music Director Justin Harper sang a song he wrote especially for Father and Pani which was accompanied by the congregation singing “Lord now let your servant depart in peace.”  Sara Harper, our resident iconographer, presented Father and Pani with an icon of St. Morwenna, a 5th - 6th Century Welsh saint who established churches in Cornwall over a long period of time.  The children of the church honored Pani Susan for her service in Sunday School and her ministry to them.  To wrap up the entertainment, Constance Hasapopulos shared her created video with images of Fr. Gabriel in action over the years, blessing animals, people, catechumens, newborns, baptizands, Pascha Baskets, koliva, icons, bread and wine and more.

The tables were decorated in themes and colors of the ethnic traditions of members of the church: American, British, Greek, Hispanic, and Ukrainian.  Teenagers Nicholas and Julianna Brinegar, Katherine Davenport, Isabel Encapera, and Rebecca and Vivian Frias served the evening dinner.  Constance Hasapopoulos, council vice-chairperson, coordinated the entire event, and Aubrey Candelaria served as our photographer. 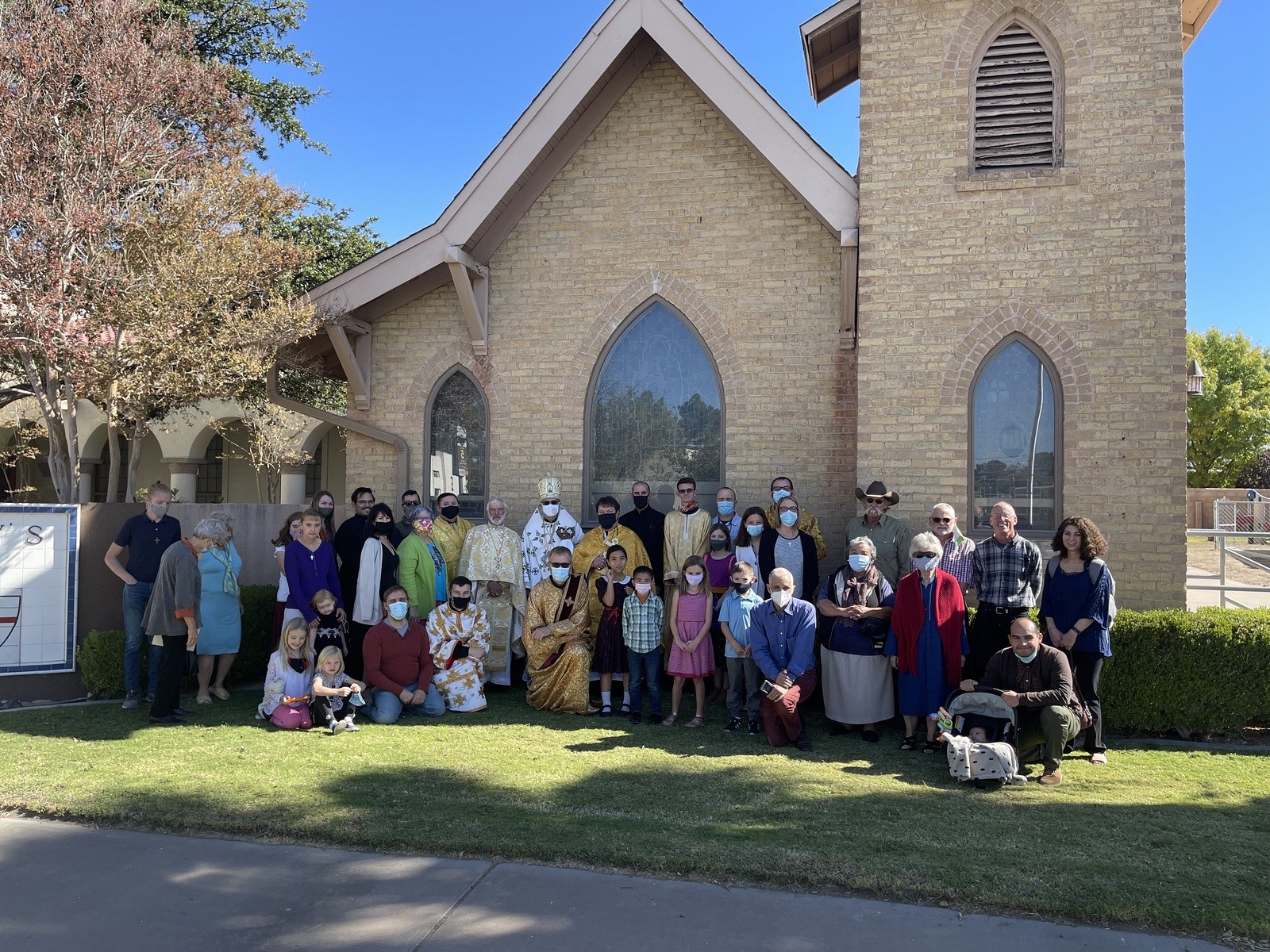 At 9:30 AM on Sunday the 24th, Vladyka DANIEL once again presided at the Divine Liturgy with Fr. Mark Phillips preaching on the parable of the rich man and Lazarus.  Following the Divine Liturgy, Fr. Mark was presented with a ceremonial key to represent his assumption of the ministry of St Anthony of the Desert.

The last scheduled event for the weekend was a meeting of Vladyka with the Parish Council at 5:00 PM on Sunday afternoon. Pani Susan’s birthday was Sunday, the 24th of October and, in one last wonderful gesture, Vladyka and the seminarians brought flowers to her in the evening and in full and beautiful harmony sang “Many years” to her before they retired and prepared to return early Monday morning to the Metropolia Center of the UOC of the USA in South Bound Brook, NJ.

Celebration of Pastoral Leadership at St. Anthony of the Desert Mission in Las Cruces, NM