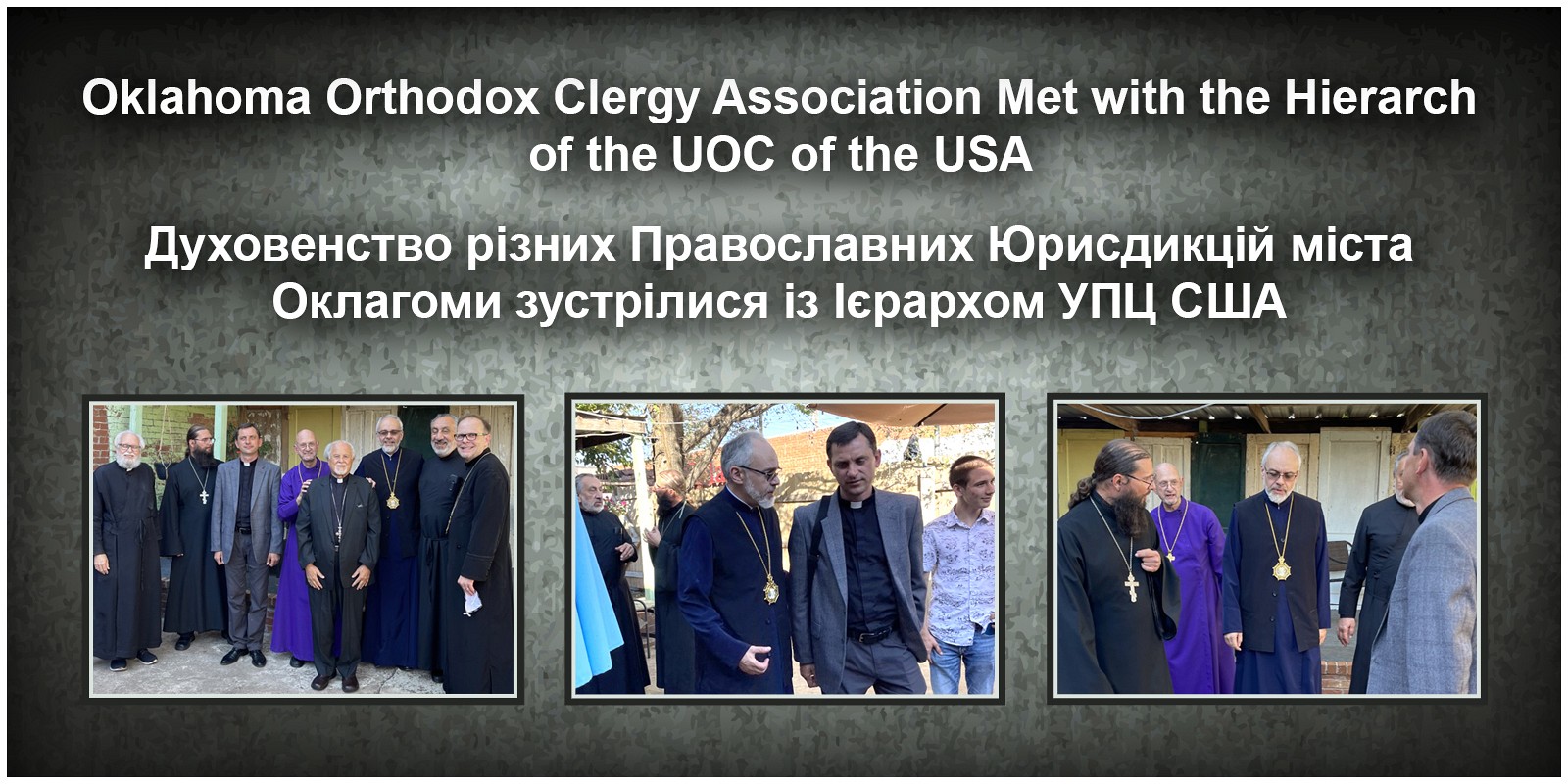 His Eminence Archbishop Daniel, Ruling Hierarch of the Western Eparchy of the Ukrainian Orthodox Church of the USA and Diaspora, arrived in Oklahoma City late on Saturday, the ninth of October, 2021, and was welcomed to the state by Very Rev. Stepan and Panimatka Iryna Bilogan, as well as Archimandrite Raphael Moore.

On Sunday morning, Fr. Raphael drove His Eminence to St. Mary Dormition Ukrainian Orthodox Church located in Jones City, Oklahoma, to be welcomed by the faithful of the parish.  St. Mary Church was founded in 1918 by Ukrainian immigrants who entered the United States through the port of Galveston, Texas. They then travelled by train to the farming communities of Harrah, Choctaw, Luther, and Jones City in Eastern Oklahoma County.  The current building, erected by those hard-working men and women, is the third home of the parish, as the first two churches were destroyed by fire.

The Divine Liturgy was served by Archbishop Daniel, concelebrated by Fr. Stepan and Archimandrite Raphael.  The clergy were assisted by Subdeacon Robby Wall and several altar servers.  Afterwards, the ladies of the sisterhood provided, as always, a feast of various culinary delights in the parish trapeza.  The hall was decorated with dozens upon dozens of photos, both from the distant past and present.  People slowly walked around and viewed the many images, recalling the historic members, many of whom were already asleep in the Lord, reminiscing about their own youth, and smiled as they recalled recent parish events and celebrations.  Every wall and cabinet were plastered with photos, joining the past with the present, and assuring a future.

Throughout the afternoon, as they enjoyed the delightful lunch, the faithful rejoiced as His Eminence slowly made his way around the room, stopping and chatting with everyone present.  Some people pointed out various photos, and shared historic stories, while others asked questions on current topics and events. Having had the chance to mingle with their hierarch, bodies satiated and souls rejoicing, the faithful began to depart for their homes, as His Eminence, along with the Parish Council members, retreated to the church for a short meeting.

After the meeting, Archbishop Daniel visited Emily Tucker who is recuperating from a recent fall.  Pani Emily is the very last member of the original group of Ukrainians who settled the state.  She recently fell at her assisted-living apartment and is temporarily residing at a rehabilitation hospital in Midwest City, while undergoing physical therapy.  Her face lit up as His Eminence entered her room, and everyone gathered around her, expressing their joy at seeing her recovering from her injuries.  Vladyka Daniel prayed over her, asking that God grant her a speedy and complete recovery.  Emily joined in and recited the Lord’s Prayer in Ukrainian.  With final smiles and blessings, the little party departed, but, Emily smiled well into the evening, her soul rejoicing at the visit of her hierarch and friends.

Before departing for Britton, His Eminence took the opportunity to meet with the clergy and discuss items concerning the parish and make plans for a bright future.  Archbishop Daniel also shared news of the UOC of the USA, and updated the clergy on the situation in Ukraine.

Later that afternoon, His Eminence visited the community of Britton, where he was able to meet with numerous Orthodox priests serving in the Oklahoma City area.  Archbishop Daniel was greeted by several Antiochian, Greek, ROCOR, and UOC of the USA clergy.  They met at the “Zero Tolerance Coffee and Chocolate Shop,” a business owned by St. Mary Church parish members, the Baker family.  Maura Baker, currently serves as St. Mary Parish Council President, and all four of their sons serve as readers or acolytes.  The oldest son, Roman, is serving in the U.S. Navy, and is stationed in Bahrain.  The afternoon hours wiled away in light banter, as well as deep theological discussions, as brother priests from various jurisdictions met together in fellowship and in the love of Christ. 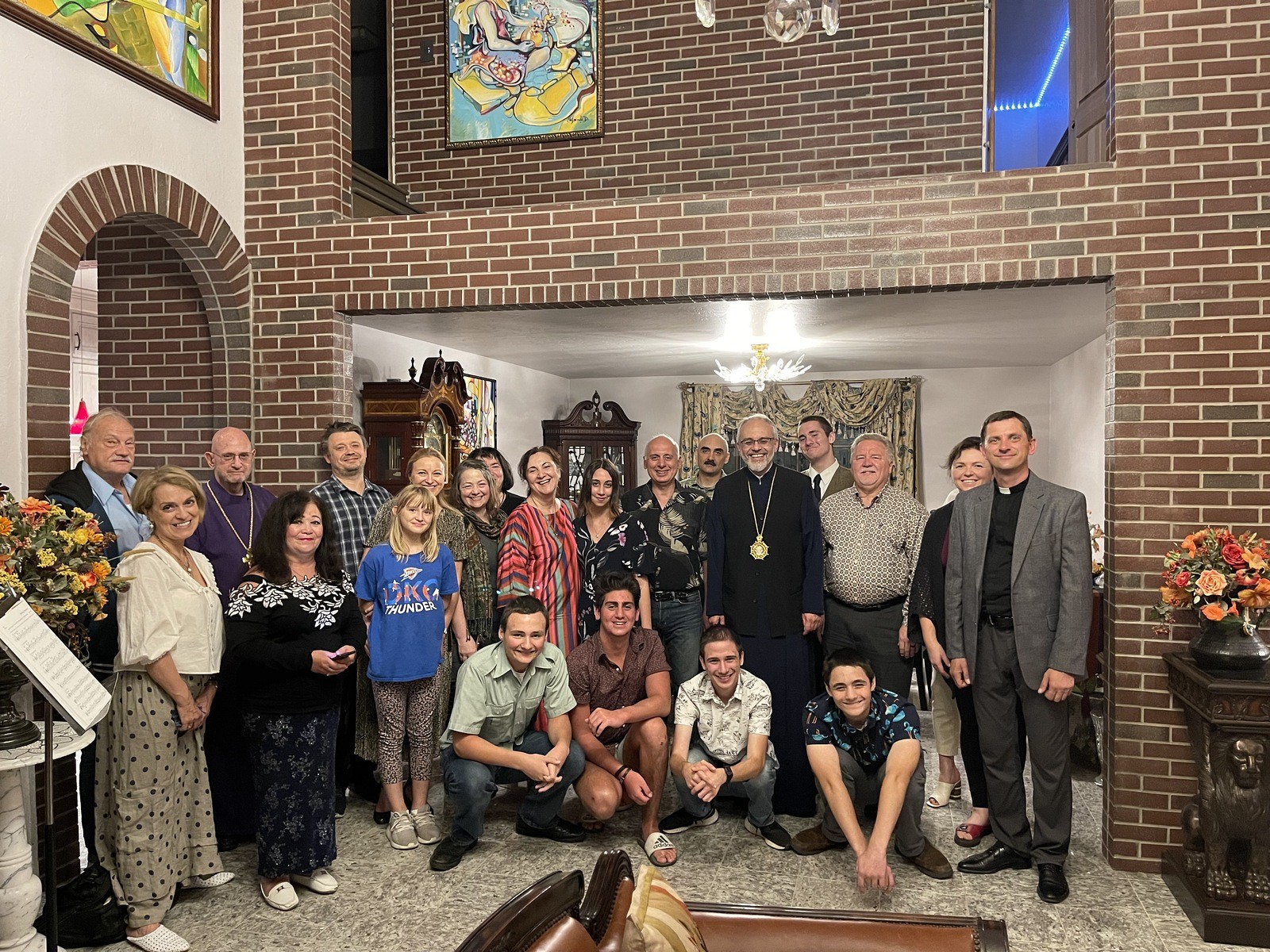 The day ended with a delicious dinner served at the home of St. Mary parishioners Mamuka and Irma Gomarteli and their children in Norman, Oklahoma.  The Gomartelis are from the Republic of Georgia, therefore, it was not surprising to find many Georgians, many of whom are members of St. Mary parish, joining them for dinner.

Before sitting down to the meal, the Lord’s Prayer was recited in English, Georgian and Ukrainian, followed by loud and vigorous renditions of each nation’s anthem.  As the dinner was consumed, and the guests were enjoying the late evening sipping coffee and relaxing, Fr. Stepan played his accordion, accompanied by various other instruments, including the joyful voices of all the guests.

The following morning, Fr. Stepan and panimatka Iryna Bilogan, along with Fr. Raphael, met with Archbishop Daniel for coffee before departing for the Will Rogers World Airport, for his return flight to Newark, New Jersey.  It had been a busy two days, full of excitement.  The people had prayed together with their hierarch, spent time talking with him and sharing stories.  His Eminence had gotten to know the parishioners, the local clergy, and the wonderful people of Oklahoma City.  The faithful of St. Mary Church look forward to the next, hopefully longer, visit of Archbishop Daniel soon.