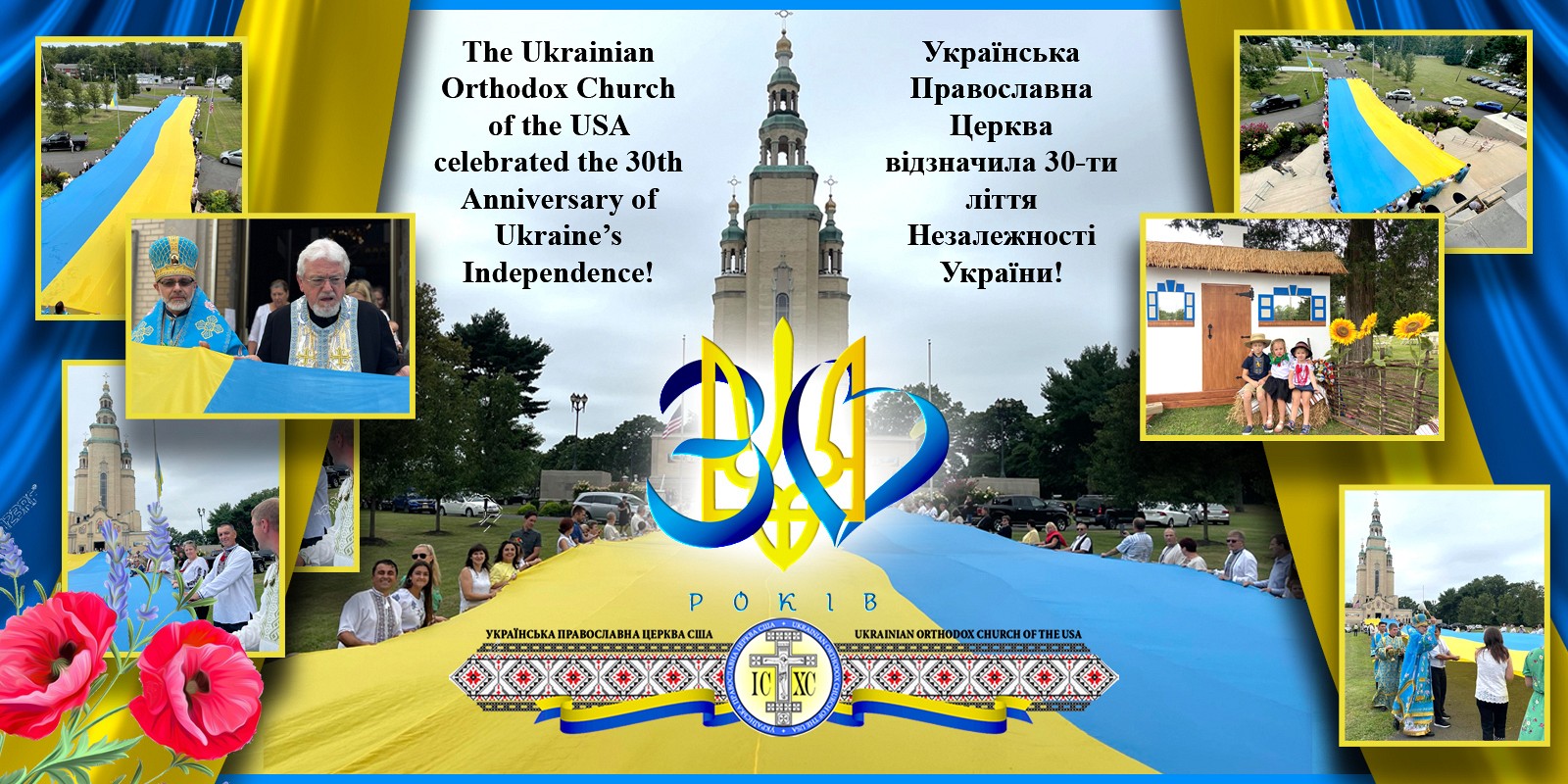 On August 29th, the Metropolia Center of the Ukrainian Orthodox Church of the USA gleamed joyfully in the morning sunshine.  The grass was trimmed short.  The flowers were in full bloom.  Tents were pitched, and a stage was erected.  Blue and yellow ribbons fluttered merrily in the light breeze. The decorated grounds stood in anticipation of the day’s events.  Today, the Ukrainian Orthodox Church of the USA was holding a celebration in honor of the 30th year of Independence of Ukraine.

The faithful arrived, all sporting Ukrainian attire.  The men were handsome in their embroidered shirts, while the women wore all manner of embellished dresses.  The children looked colorful in their national dress, as the little girls kept fidgeting with the floral wreaths atop their heads.

As 10 a.m. neared the faithful filled the St. Andrew Memorial Church.  While some people lingered, lighting candles, and praying in the tiny icon alcove, His Eminence Archbishop Daniel, Ruling Hierarch of the Western Eparchy, dressed in vibrant blue vestments, with the blessing of His Eminence Metropolitan Antony, Prime Hierarch of the UOC of USA, began the Divine Liturgy.

Prayers were raised for the wellbeing, good health, and happiness of the faithful in the United States, those in the ancestral homeland of Ukraine, and all the world.  His Eminence earnestly prayed for the abatement of the COVID-19 virus, the recovery of all who have fallen ill, and the peaceful repose of those who have succumbed to the illness.

The Gospel Reading was from Matthew 17:14-23, retelling of the time a man came to Christ asking Him to help his ill son, because the Disciples were not able to heal him.  After the Lord heals the boy, the Twelve inquired of Christ why it was that they were not able to heal the boy.   Due to their unbelief.  The Lord tells them that they were not successful merely because they doubt.  He reiterated the importance of believing, by stating that if they had faith the size of a mustard seed (which is tiny) they would be able to move mountains.

In his sermon, Archbishop Daniel stated that it is easy to doubt, but, faith sometimes is difficult.  We must put aside our preconceptions; put aside our self-assuredness; put aside our sense of control and put all our faith in God.  When we ask, we must believe that He hears and will respond in a way that will be best for us.  Often we think God does not hear us and does not answer us.  However, sometimes what we ask for is not in our best interest and will not lead to our eternal salvation.  God will not endanger us, because of our own whims.  Instead of focusing on our wants – a larger house, newer phone, prettier clothes; we should be thankful that we have a home, food on the table and clothing to cover our bodies.  We need to focus on true needs, not wants.  We need to focus on others, not ourselves.  We need to pray with an open heart, and then we will be able to move mountains in this world.

It had been many months due to the pandemic that the church had been filled with so many people.  It was a glorious sight to see everyone come up to partake of Holy Communion, taking their turn to “sit at the feet of Christ” as Mary had, before returning to their daily lives as Martha.

As the Divine Liturgy concluded, a short Moleben was served in honor of Ukraine, her people, and her independence.    As the clouds rolled in, the faithful were grateful for the cooler air as they exited the church and stood at either side of the entry drive.  The anticipation could be felt as everyone smiled and look about excitedly.

Standing at the top of the steps was Metropolitan Antony and Archbishop Daniel, who quickly grabbed hold of a wide roll of cloth.  This cloth was respectfully held by the hierarchs and clergy at the one end, as it was slowly unrolled with people running up to grab the sides as the fabric became longer and longer.  What an amazing sight as hundreds of people held what turned out to be a 350 meter long Ukrainian flag!

As the adults laughed with joy, the youngsters ran beneath it and played in the blue and gold light glowing through the flag.  Having sung “God is Great/Боже Великий Єдиний”, the public burst out in a loud and heartfelt rendition of the Ukrainian National Anthem, as the flag gently swayed, and rippled, in their hands.

Leaving Metropolitan Antony holding the top of the flag, Archbishop Daniel made his way down and around the large banner, blessing it and the faithful who so proudly held it high.  Everyone laughed as they were sprinkled with holy water, and in turn raised the flag even higher.

Thus the afternoon festivities began.  As the supersized flag was rolled up, the faithful began to make their way to the various areas set up along the perimeter of the church grounds.  Having fasted before coming to church, everyone got in line at the Sisterhood hall to enjoy a delicious meal.  The ladies had prepared and prepackaged a few options, along with desserts which they and many volunteers had baked and packaged up for safe distribution to protect people from any possible viral transmissions.

As everyone enjoyed their lunch, sitting at tables set beneath the broad green limbs of the trees, chit chatting with old friends, and getting to know new ones, the microphone on the stage squawked.  Everyone’s eyes turned towards the stage to see if the program was beginning.  The Emcee this day was newly ordained Father Mykola Zomchak, a graduate of the St. Sophia Ukrainian Orthodox Theological Seminary.

Fr. Mykola welcomed everyone to the festivities, warmly greeting His Eminence Metropolitan Antony, and His Eminence Archbishop Daniel, the visiting clergy, their families, the parishioners, and all the guests who had arrived from near and far.

Before starting the entertainment portion of the program, the emcee first introduced the Ukrainian Consul General, Alexei Holubov who gave a few words thanking the people of Ukrainian heritage in the Diaspora, for their continued support of their ancestral homeland.

The Director of the Ukrainian National Federal Credit Union, Jaroslav Koshelevskyj, handed Archbishop Daniel a check for $100,000 to be used towards the completion of the Ukrainian Orthodox Church of the USA’s History and Education Center, while Financial Director Zenko Halkowych handed the president of the Pokrova Sisterhood a generous donation.

As the applause died down, and the music started, everyone sat back and got comfortable, anticipating an enjoyable afternoon.  Several singers performed on the state including Ihor Sherban, Yulia Stupin, the sisters Inna and Tetyana, Pavlo Bahan, as well as seminarian Roman Marchyshak.

As the adults were entertained by the singers, the children were kept busy under the Ukrainian History and Education Center’s “Crafts for Kids” tent, where they rolled up their sleeves and lost themselves creating various Independence Day themed crafts.  Biting their lips and frowning, they painstakingly worked on crossword puzzles, practiced finding Ukrainian words, and decorated Trizubs.

As the formal program concluded, everyone got up and mingled with the performers and then branched out to the various booths, while others dallied and danced to the Ukrainian tunes that were being broadcast from the loudspeakers.

As Olena Halkowych announced the bakery raffle, everyone paused to check their ticket numbers.  The sisterhood was auctioning off a scrumptious tray of lovingly baked desserts, the proceeds of which would go towards the sisterhood and the projects they support.

In the corner people were queuing for a turn to take home a photographic souvenir of the day.  Standing regally beneath the trees was a replica Ukrainian House sponsored by UHEC.  To make the photo more memorable, props were available – Ukrainian embroidered shirts, wreaths with long ribbons, scarves, red beads, and straw hats.  People giggled as their friends took up poses, peeking out through the house’s blue framed windows.  Children took their places sitting upon the haybales, donning straw hats and colorful scarves, flanked by tall sunflowers swaying in the breeze.

As the afternoon wore on, people began to depart.  Everyone had one thing in common – a gift bag.  Nobody could pass up the St. Andrew Bookstore booth, nor the Ukrainian History and Education Center Giftshop without stopping and purchasing a memento.  Some bought crosses and pendants, while others picked up icons or prayer books.  Various embroideries were flying off the shelves, as were handmade ceramics, ornaments, and pysanky.

The clouds had parted and the sun that had been shining began to descend in the west as the people began to bid their fond farewells, laughing, joking, and dancing all the way to their parked cars.  With final waves goodbye, the echoes of the music died down, and the Metropolia Center returned to its previous quiet state.  Crickets chirped around the Ukrainian House, complaining as it was taken down and stored away until the next event.  Chairs were stacked, ribbons packed, and tents dismantled.

As the St. Andrew Church domes lit up in blue against the darkening evening sky, the last of the vehicles departed.  Even though the festivities were over, the celebration of 30 years of hard-earned Independence continued in the hearts and souls of the faithful of the Ukrainian Orthodox Church of the USA, which prays daily for the wellbeing of Ukraine and her people.

May the Lord bless Ukraine with many years of Independence, prosperity, and peace.  Mnohaya Lita!

Latest News
00000
Get to Know our Seminarians…
00001
UOC of the USA Blessed with a New Priest
00002
The UOC of the USA Continues Charitable Ministry in Ukraine
00003
His Eminence Metropolitan Antony Visits Holy Trinity Mission in Whaleyville, MD
00004
Archbishop Daniel Visits Los Alamos, NM - the Parish Community Commemorates the 20th Anniversary of 9/11 Terrorist Attack Upon the US
00005
Joint statement on climate change by the Ecumenical Patriarch, Pope Francis and the Archbishop of Canterbury
00006
St. Luke Ukrainian Orthodox Parish Family of Warners, NY Prays, Ministers and Celebrates Together
Pastoral Reflections
00000
Elevation of the Life-Giving Cross
00001
Виноградарі
00002
«Коли ж хочеш увійти в життя вічне,- дотримуйся заповідей»
00003
What shall I do that I may have eternal life?
00004
A Merciless Servant
00005
Притча про немилосердного боржника
Upcoming
00000
Archbishop Daniel's Liturgical Schedule
00001
Month of SEPTEMBER in the Life of the Church - Місяць ВЕРЕСЕНЬ в житті Церкви
00002
Prayer for the Youth - Молитва за Молодь
00003
YOU CAN HELP YOUR CHURCH: Make a donation to support the Ministry of the Ukrainian Orthodox Church of the USA
00004
Order Calendar 2022 / Orthodox Daily Planner
00005
Pre-order your 2022 Calendar - Замовляйте ваш Календар 2022
Recent Galleries