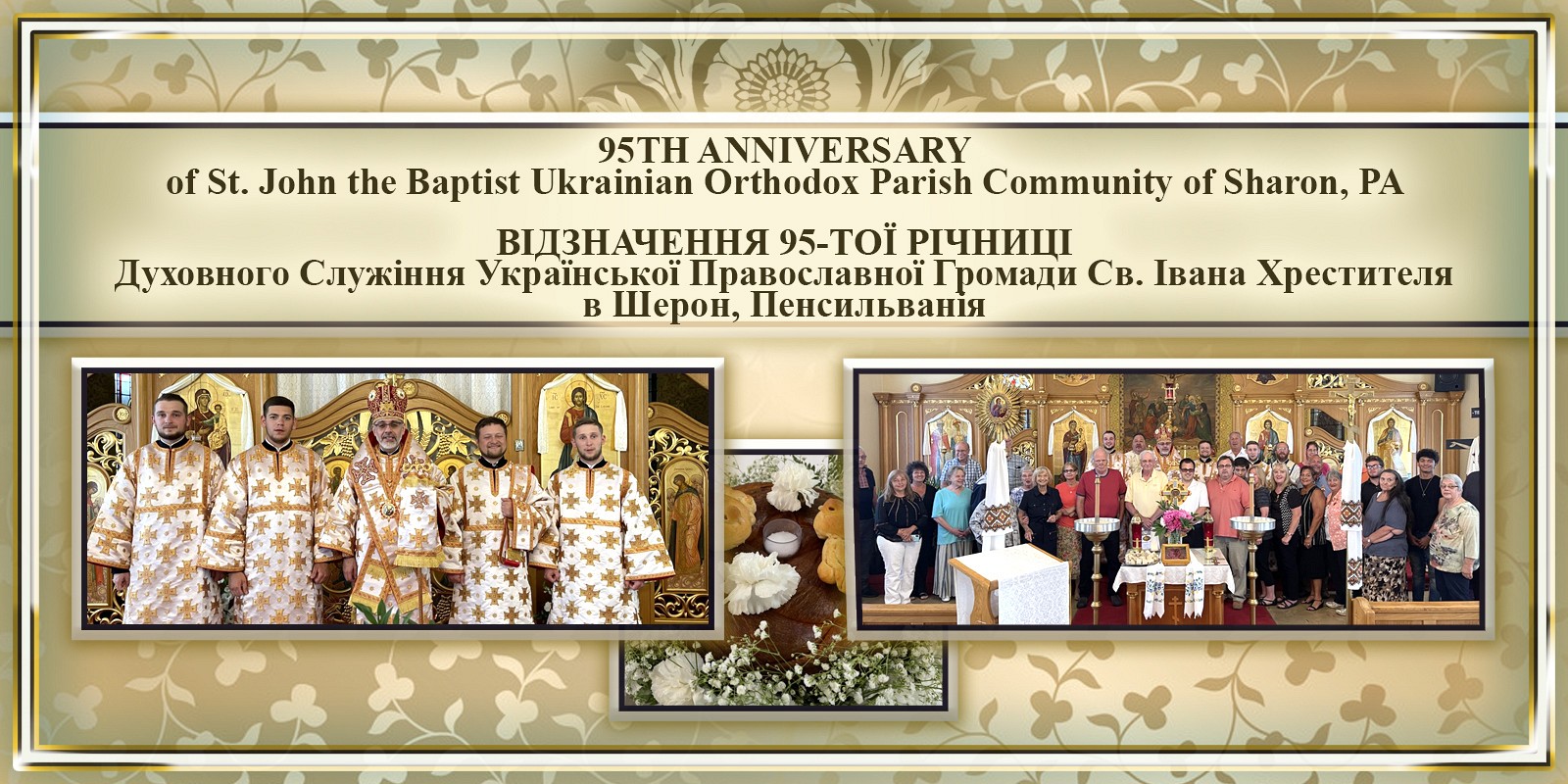 On Saturday evening, June 12, 2021 - the eve of the Sunday of the Fathers of the 1st Ecumenical Council - His Eminence Archbishop Daniel presided over the celebration of the Vespers service, served by the pastor of the parish community Very Rev. Fr. Steven Repa and Deacon Myroslav Mykytyuk. Following the liturgical service, Vladyka Daniel reviewed the most recent repairs done in the sacred temple of the parish and received an update on the reconstruction of the church’s dome. Seeing the spiritual uplifting in the eyes of the parishioners in attendance, the archbishop promised to return in the near future for the blessing of the reconstructed dome.

With the early morning sunshine sparkling off his gold vestments, Archbishop Daniel ascended the steps of the church and was warmly greeted by Parish Vice President, Ed Hordyski.  Having accepted the traditional Ukrainian greeting of bread and salt in the Narthex, His Eminence then gladly accepted a colorful and joyful bouquet of irises and lilies from Sharon Hordyski.

As the sun streamed through the stained-glass windows, the nave glowed warmly in shades of red, yellow and blue, as Vladyka entered and was greeted by Parish Pastor V. Rev. Steve Repa.  Expressing his happiness at visiting the historic Pennsylvania parish, His Eminence sprinkled the faithful with holy water, bestowing God’s blessings upon them.

The faithful who had come to celebrate the 95th anniversary of the parish, found they had even more to celebrate as they became witnesses to the tonsuring as Reader and setting aside as Subdeacon of recent Seminary Graduate James R. Cummings.  A Reader is the second-highest of the minor orders of the Orthodox Church. It is a clerical order to which a man is tonsured and ordained, setting him apart as blessed by the bishop to read in services and in the Divine Liturgy.

Everyone diligently watched as His Eminence cut James’ hair, burning it upon the flame of a candle, just as was done during his baptism, and then listened as Reader James read from the Epistle Book.

His Eminence now blessed Reader James and placed upon him a gleaming white sticharion/robe which is a long-sleeved tunic that reaches all the way to the ground. It reminds the wearer that the grace of the Holy Spirit covers him as with a garment of salvation and joy. In addition to this, Archbishop Daniel wrapped an orarion around him, representing the grace of the Holy Spirit. The orarion was tied around his waist, up over his shoulders (forming an X-shaped cross in back), and with the ends hanging down in front, tucked under the section around the waist in an X-shaped cross.  Placing his hand upon the bowed head before him, His Eminence read the prayers of ordination over the young man, and then making the sign of the Cross, presented the faithful with newly set apart Subdeacon James.

As Subdeacon, the highest of the minor orders, he is now allowed to serve the bishop, and priest, in the altar during Liturgy, and is permitted to wear a cassock as a sign of his suppression of his own tastes, will, and desires, and his canonical obedience to God, and his bishop.

The choir burst out in song as the Divine Liturgy began, singing like angels from the heavens.  The Gospel of John 17:1-13 was read, in which God the Son, discourses with God the Father about those whom He has given Him.  Christ, asking that the Father take care of those who are left to live in this world.  His Eminence gave an inspiring sermon, explaining that everyone is created in the image and likeness of God, and that we need to make an effort to see God in all the faces before us.  On this Archbishop Daniel reminded those gathered, we also honor the Fathers of the First Ecumenical Council, who in 325 AD gathered through the Grace of the Holy Spirit to define various Church issues and concerns – arguing the true nature of Christ, dispelling heresies that over time had formed and addressing various other Church matters. Their efforts helped form the Church we celebrate today, and while we do not sit on Ecumenical Councils, we too have a mission to complete from God.  Today more than ever we are to defend Christ, and His teachings and stand strong against heresies.

Everyone contemplated Vladyka’s words as the Divine Liturgy continued, and they approached the Chalice with renewed humility and determination to do God’s work in their lives, and with their lives.

As the choir sang the final hymns and the Divine Liturgy concluded, His Eminence, with the blessing of Metropolitan Antony, Prime Hierarch of the Ukrainian Orthodox Church of the USA, presented Centennial Medals to a number of worthy and dedicated parishioners of the parish.

Having bestowed all the awards, Archbishop Daniel called the faithful forward for a group photo before everyone headed to the parish hall to spend time with their parish family and enjoy a delicious banquet.  With everyone seated and happily chatting away, catching up on news, and sharing summer plans, Vladyka requested President Myron T. Worona to prepare a chicken on the spit, which Myron was happy to oblige. In addition to the scrumptious chicken the guests were presented a smorgasbord of items which were topped off with a lovely cake to commemorate the 95th anniversary of the parish, and to honor newly ordained Subdeacon James with his recent graduation from the St. Sophia Seminary, earning a Master of Arts Degree in Applied Orthodox Studies.

As everyone enjoyed the cake Fr. Steve stepped up and thanked His Eminence for joining their celebration.  Gesturing at the beautiful decorations, the heavy-laden tables, and the delicious food, he thanked the ladies of the parish for all their hard work in preparing for this celebration, and thanked all the parishioners and guests for coming and celebrating such a momentous day together.

Thanking Fr. Steve for his words, His Eminence took a moment and addressed the faithful, informing them about the tragedies Ukraine has endured and continues to suffer.  He reminded everyone of the Chornobyl nuclear disaster that decimated the population and still today causes suffering to this day.  He also spoke of all the good work the Church has been able to do in Ukraine, aiding the elderly and the orphans, through the generosity, support, and prayer of the faithful. 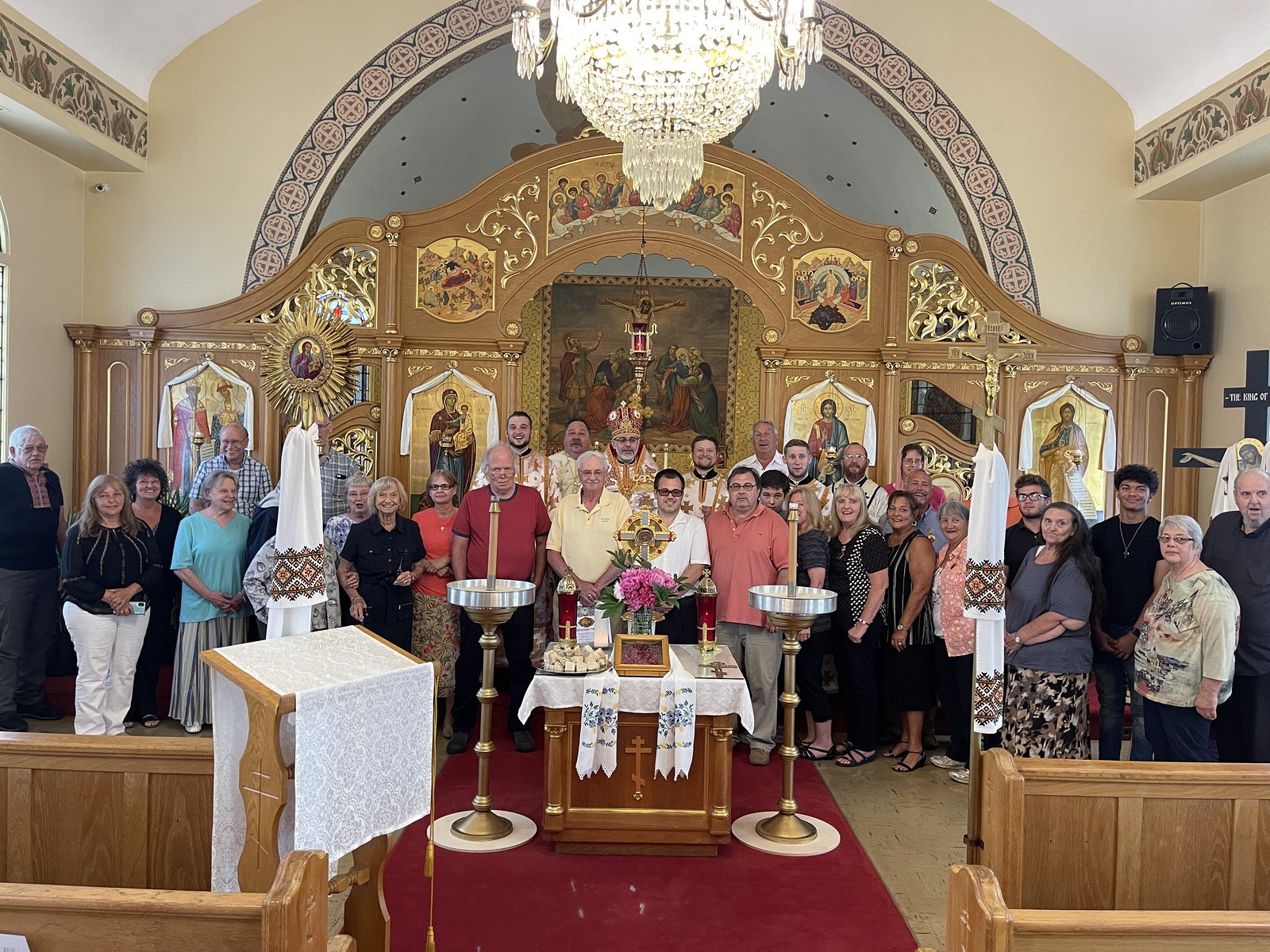 The parish would not be celebrating 95 years if it were not for the dedication and hard work of her parishioners.  With gratitude to the faithful, the clergy and hierarchs, and asking for continued prayers and support, the parish of St. John the Baptist in Sharon, Pennsylvania, promises to live on for many generations to come.

May God grant many happy, healthy, and prosperous years to the parish as it stands as a beacon of light, spreading the Word of God, and continues doing good works in the local community and the world beyond.