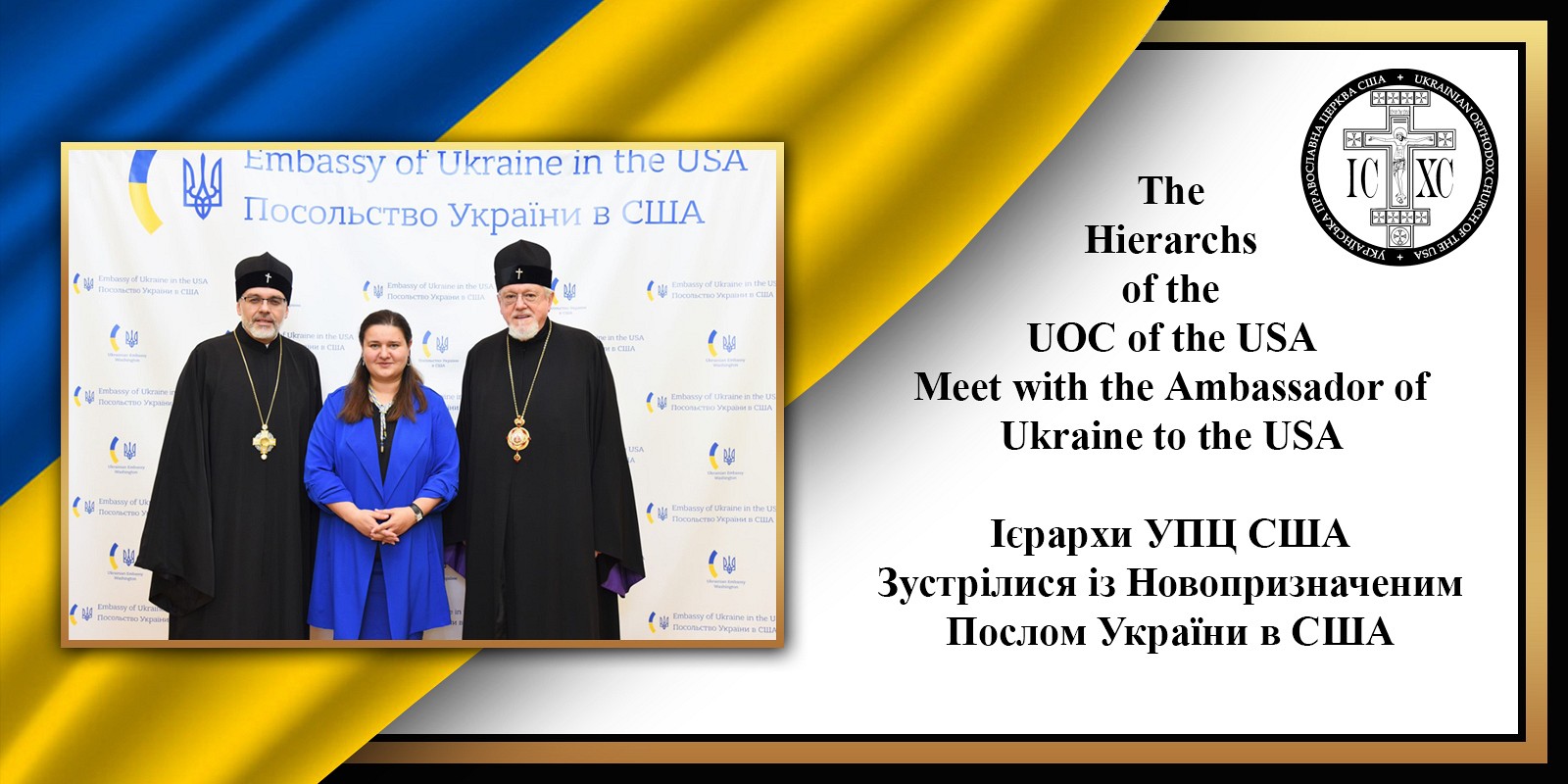 The Ambassador Extraordinary and Plenipotentiary of Ukraine to the United States of America was appointed by Ukrainian President Volodymyr Zelensky on 25 February 2021, which may have seemed like a daunting challenge during the midst of one of the worst pandemics the world has known.  Ambassador Oksana Markarova, however, was not one to shy away from a challenge.  Since taking up her position she has utilized her God-Given talents, especially the ability to relate to people on a one-to-one basis or under any other circumstances as the voice of the Ukrainian nation to the United States government and to the Ukrainian community at large.

There Eminences Metropolitan Antony and Archbishop Daniel were honored to receive an invitation from Ambassador Markarova to introduce herself and to get to know them and their concerns and hopes along with those of their faithful and about Ukraine-USA relations.  Over a lengthy luncheon meeting – and the utilization of the term “lengthy” refers to the bishops’ pleasant surprise at the amount of time the Ambassador set aside for them – the circumstances of ecclesiastical life of Ukraine were discussed in detail along with the effect those circumstances have had on the life of the Ukrainian Orthodox Church of the USA.  The Ambassador was aware of the bishops’ role over the past two decades in encouraging world Orthodoxy to finally consider how the ill effects of the way ecclesiastical disunity in Ukraine was damaging the spiritual lives of millions upon millions of Ukrainian faithful.  She was also aware of the “more than significant” role of Archbishop Daniel as the Exarch of His All-Holiness Patriarch Bartholomew I of Constantinople concluding in the granting of Autocephaly to the Orthodox Church of Ukraine.

Ambassador Markarova expressed her deep desire to meet with Ukrainian Americans in all areas of the USA in the coming months once there is a bit more clarity about the safety of such an effort as the pandemic seems to be lessen.  The hope is that following the summer months new waves of the virus will not become manifest.  She has a deep desire to hear what people are thinking about and reacting to all the issues of life in Ukraine today. The people of Ukraine still value the experience of their fellow Ukrainians beyond the borders of Ukraine and how that experience might be of great value to all levels of society in Ukraine today.

The bishops presented an icon of the Ukrainian Orthodox Metropolitans/Saints of Kyiv and the five volume Vlasovskyj “History of the Ukrainian Orthodox Church, along with the UOC of USA Church Calendar and historical booklet published for the UOC of USA Centennial Celebration in 2018.  They assured Ambassador Oksana Markarova of their continued prayers for her and her efforts over the years to come and invited her to visit the UOC Metropolia Center soon.

Photos - Courtesy of the Embassy of Ukraine in the US