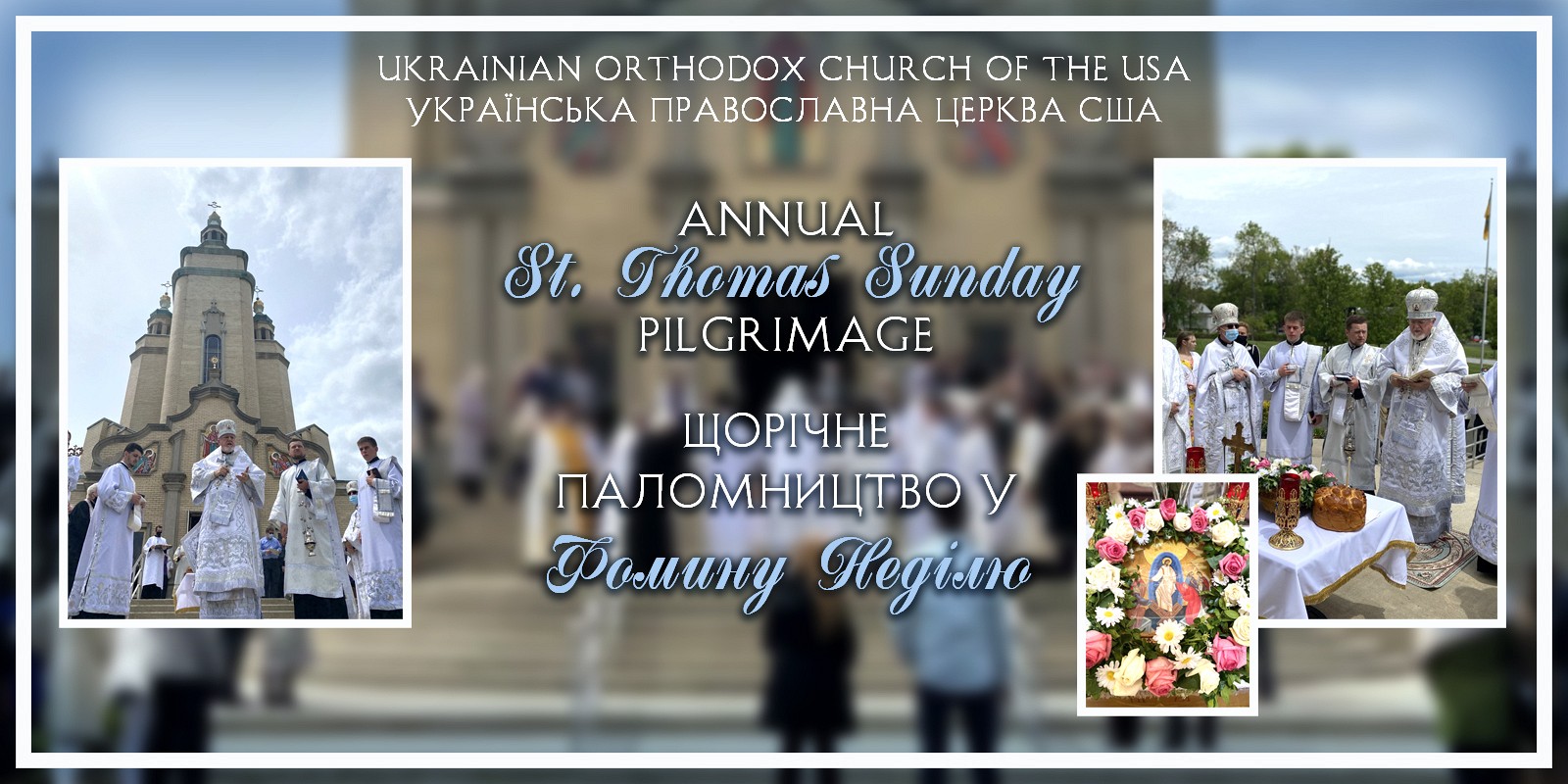 “The tear for the deceased will dry up, the flower on the grave will fade.

But prayer comes directly to the heart of the Lord Almighty.”

Each year on St. Thomas Sunday – one week following Pascha the annual Pilgrimage to the Spiritual Center of the UOC of the USA – the Metropolia in South Bound Brook/Somerset, NJ. During this Pilgrimage hundreds of pilgrims visit to pray over the graves of their relatives, who are buried at the Ukrainian "Pantheon" – St. Andrew's Cemetery. Traditionally, the faithful gather on St. Thomas Sunday to bring the Good News, the Light of Christ's Resurrection to those who have departed from us. This year was no exception and the Pilgrimage, even with all the restrictions imposed by the COVID-19 pandemic, still took place.

In his sermon, Metropolitan Antony noted the importance of taking our faith seriously, approaching with all our heart and soul the principles of the Christian Faith given to us by Christ Himself. Vladyka also stressed on the need for daily repentance for our sins and unrighteous life, because no one knows the day or hour when we will stand before the Lord. Metropolitan Antony urged everyone to reflect and pray these days for those who have departed from us and are buried here at St. Andrew's Cemetery or anywhere else in the world.   We must also contemplate our own death, which will surely come. The Metropolitan also spoke about the first Prime Hierarch of our Church, Metropolitan John Theodorovych of Blessed Memory, who fell asleep in the Lord on May 3, 1971 and was interred in the Cemetery, immediately behind the Memorial Church on May 8 – 50 years ago. Vladyka also spoke about his own experience with Metropolitan John, stating in conclusion, that it is only because of Metropolitan John’s loving spiritual guidance, that he stands here in Church at this 50th anniversary as Priest and Bishop. His Eminence spoke of Metropolitan John as a loving Bishop who was able to embrace all the faithful of our Church, regardless of their origin or the language they spoke and still remains an worthy example of hierarchical and priestly ministry.

After the liturgy, Metropolitan Antony together with the clergy served a memorial service over the grave of Metropolitan John Theodorovych.

“On the third of May 1971, the First Primate of our Church of the U.S.A., His Beatitude, John, Archbishop of Philadelphia and Metropolitan of the Ukrainian Orthodox Church of North and South America, fell asleep in the Lord.

... Metropolitan John (Ioan Theodorovych) was born in the town of Krupets, Ukraine, on 6 October 1887. Here his father served as a priest and others of his ancestry also served the church. Here in this community, he began his studies and later entered the Seminary Preparatory school in the city of Klevan. Upon graduation here, he enrolled in the Zhytomyr Theological Seminary from which he graduated with high honors. Following graduation, he continued his studies and received his teacher’s certificate, which he utilized by teaching for five years in the schools of the Dubno and Ostroh Districts. It was during this time that he married. He was ordained a Deacon, in 1914, and as a priest on 10 May 1915. This was during the World War I and tragically, Fr. John’s wife suddenly reposed in August of 1915. He served as a Chaplain and later was assigned to a parish in Mitintsi, in the district of Starokostantiniv. Later, during one of the Sobors he became one of three candidates who were elected to become Bishops of the Ukrainian Autocephalous Orthodox Church. And so, he was consecrated Bishop by the Metropolitan of All-Ukraine, Wasyl Lipkiwsky and Archbishop Nestor Sharaysky on the 26 October 1921. At this time he became the Bishop of the Podil’ska Eparchy.

... The Ukrainian Orthodox Church in the USA had its beginnings in 1915 when decided that the Orthodox Ukrainian American population had reached significant enough numbers as a distinctive ethnic group and should have its own jurisdiction. Eventually, in 1918, the group sought and received spiritual protection under the omophor of Bishop Germanos (Shehadi) of the Syrian Orthodox Church. Bishop Germanos provided the necessary guidance for the new jurisdiction until the need for it own Bishop became obvious to all. The jurisdiction requested the appointment of one from the Autocephalous Church. Because of his proven exceptional organizational and administrative skills, Bishop John was elevated to the rank of Archbishop and assigned by the All-Ukrainian Church Council to Archpastoral duties in the U.S.A. Archbishop John arrived in the United States in 1924 and immediately called for a Sobor, which would formalize the establishment of the Archdiocese as the American-Ukrainian Orthodox Church of the USA. This Sobor elected Archbishop John as its first Primate. Bishop Germanos officially relinquished his authority over the Church to Archbishop John. Following the Sobor, under the guidance of Archbishop John, the life of the American-Ukrainian Orthodox Church of the USA truly began to blossom.

On the same day, a large number of people were at the cemetery, where they together with the priests had memorial services over the graves of their loved ones. The sunny weather made it not only possible but also very pleasant to hear the many versions of “CHRIST IS RISEN” repeated throughout the day.

In his sermon, Metropolitan Antony spoke of the faith. He emphasized that when our Lord spoke to Apostle Thomas, he was and is also speaking to each of us: “Do not be unbelieving but believing.” (John 20:27) Further: “Thomas, because you have seen Me, you have believed.  Blessed are those who have not seen and yet have believed.” (Jn. 20:29) the Lord still speaks the same words to us today.  That is why we must keep the faith in our Lord Jesus Christ, without which there is no salvation, said Vladyka.  Belief, faith and trust in the Lord and the Grace, He has inspired us with can carry us worthily through our life.

After the liturgy, His Eminence, together with all the clergy and all the pilgrims, processed outside to the Memorial Church platform for the Memorial Service for all those who had died before us. In particular, during the Memorial Service he commemorated all the departed Orthodox Patriarchs, Metropolitans, Archbishops and Bishops, who are buried at St. Andrew's Cemetery, all those who gave their lives for the freedom and independence of the United States and Ukraine, all those who died during Holodomor and Chernobyl disaster. At the end everyone traditionally sang “Christ is Risen”.

Although the pilgrims were not able to visit all the buildings of the Spiritual Center due to this year's pandemic, such as the Ukrainian Cultural Center, St. Sophia Seminary, the Mausoleum of the Holy Resurrection or the Consistory Building, they were blessed to come and pray over the graves of their loved ones to greet them with the powerful fact:  CHRIST IS RISEN!  INDEED HE IS RISEN!  This is so important because in 2020, the pandemic did not permit us to gather at all in our annual Pilgrimage.