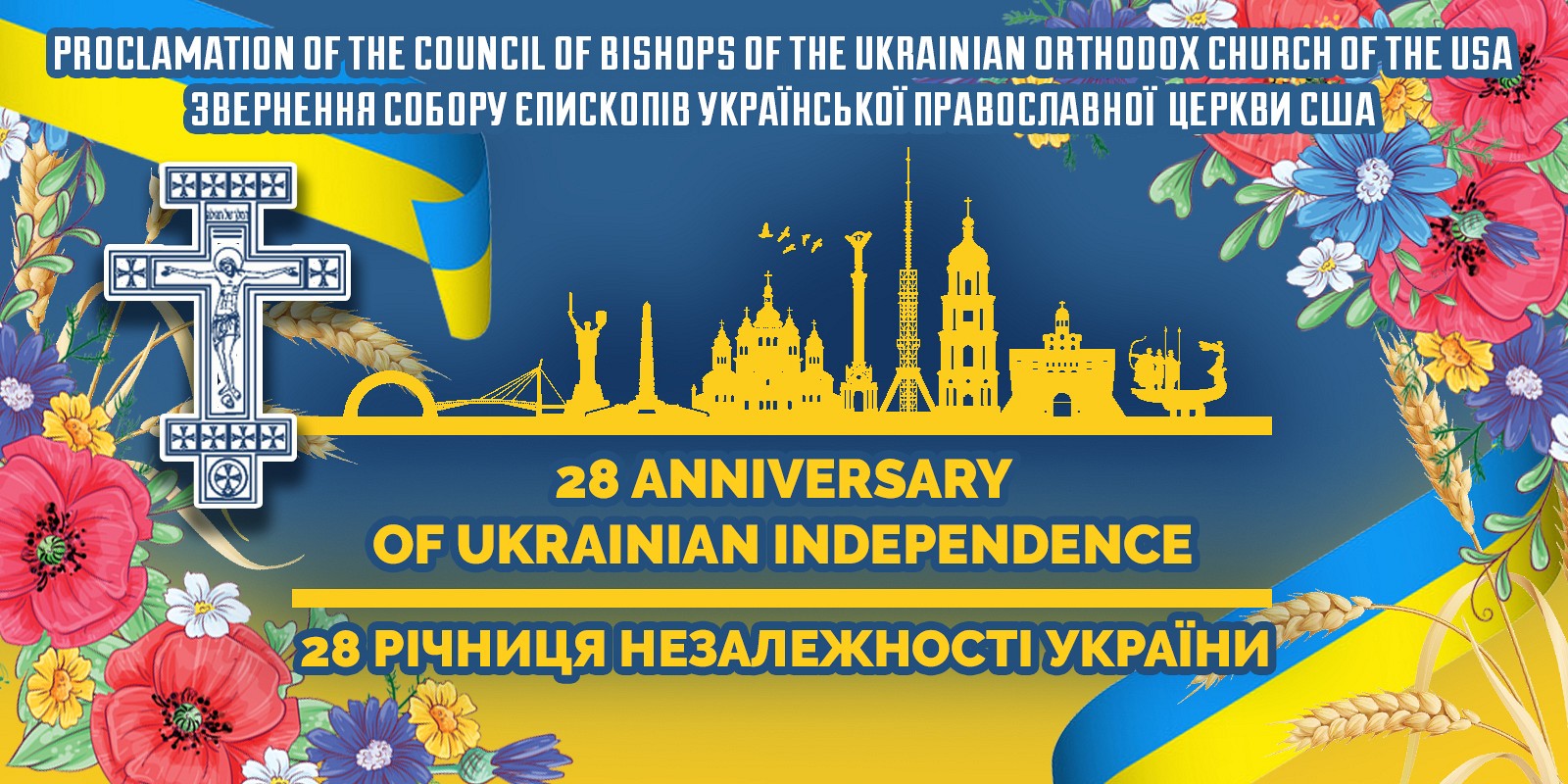 On the Celebration of 28th Anniversary of Ukrainian Independence

Beloved Brothers and Sisters in Christ,

Each year on the twenty-fourth of August, Ukrainians throughout the world come together in the love of our Lord to celebrate the historical significance of the heroic struggle of the Ukrainian nation for freedom, liberty, and independence.

As our forefathers have done in the past, here in the United States of America, on this day we gather as families and communities to celebrate the independence of our ancestral homeland. We affirm on this important day the values of freedom and liberty that have characterized the spirit of our forefathers and our national pride. As we celebrate this Ukrainian national holiday, we are granted the occasion to consider that freedom and liberty are not only treasured values, but are essential and universal conditions for cultivating loving relationships with God and with others.

For us, living in the Western world, this annual celebration demonstrates to all members of society of every race, culture, and religion the significance of our Ukrainian heritage and our Holy Orthodox faith. In our contemporary world, which is beset today by threats of terror and war, our heritage and faith uphold the virtues of freedom, hope in God’s presence and deliverance, and love for all human beings. These virtues are absolutely essential for the promotion of peace, for the establishment of justice, and for the cultivation of loving relationships with God and one another. Our cultural and religious legacy as Ukrainian Orthodox Christians reminds us of our sacred responsibility to ensure that all people have access to the same fruits and blessings that we enjoy as citizens and residents of a free nation. In our communities and parishes, we meet this responsibility through upholding our commitments to charity, through cultivating openness in our hearts toward strangers in our midst, through our unconditional love for our neighbors, and through our true worship of God, Who created all human beings in His perfect image and likeness.

When we contemplate this 28th anniversary of the Independence of Ukraine, we look at what is presently taking place in Eastern Ukraine and Crimea, and perhaps wonder if that independence is sustainable when the constant stress of foreign sponsored attacks and attempts to destabilize the nation result in enormous loss of human life, property and feelings of safety. Even more so, these attacks create a lack of confidence in and hope for a central government that can be strong enough to conscientiously and morally inspire the citizens of Ukraine to “keep the faith” that God has not, never has and never will abandon them. All is NOT lost.

The Ukrainian nation and her people have known many worse times of oppression, repression and suppression, most of them emanating from the same source of such “…pressions” they experience now – from a neighbor whose stated reasons for their invasive actions are to protect its own people or to restore its own glory – all forms of “nationalism”. When Ukrainians speak in the same terminology about protecting their own and maintaining their independence – they are called Nazis or Fascists and even worse.

The world is finally beginning to comprehend the hypocrisy of Ukraine’s neighboring “brother” of the twenty-first century who has not departed from the goals, methods and atrocities of their predecessors from the nineteenth and twentieth centuries – and even earlier. That world must remain united in its determination to rid itself of and stop such forces once and for all time. This will be our prayer as we celebrate the 28th anniversary of Ukrainian independence.

We call upon the people of Ukraine – all within her borders and all who for decades or just days live beyond those borders – to remain strong in their faith. Call to mind how even after the most incomprehensible and genocidal afflictions – like the Genocidal Holodomor – Ukraine has risen from the ashes like the mythological Phoenix and became stronger and more determined to follow the road to a self-sustaining independence. Now is not the time to engage in a cannibalistic dissection of society and political will. Now is the time to fall down on our knees to seek God’s further protection and guidance. Now is the time to ensure the creation of a strong government, which with all of its institutions, including the armed forces, can speak with confidence that the citizens of the Ukrainian nation support it.

Every nation of the world throughout the history of mankind, has experienced much of what Ukraine experiences during this first 28 years of independence. The government and the people of all segments of Ukrainian society – having set aside all egotistical desires and agendas - must evolve into a self-identity that will, without question, withstand any and all attacks against it. It is the prayer of the hierarchs, clergy and faithful of the Ukrainian Orthodox Church of the United States of America and the Diaspora that our brothers and sisters throughout Ukraine will be granted the patience to allow their faith and dedication to bear fruit.

On this Day of Independence, we pray that God may deepen our understanding of freedom and liberty in all their dimensions, that our love for Him and for one another may be also intensified. May His peace and abundant blessings abide in your hearts forever.

With paternal love in Christ,

+ANTONY, Metropolitan of the Ukrainian Orthodox Church of the USA

+DANIEL, Archbishop of the Ukrainian Orthodox Church of the USA