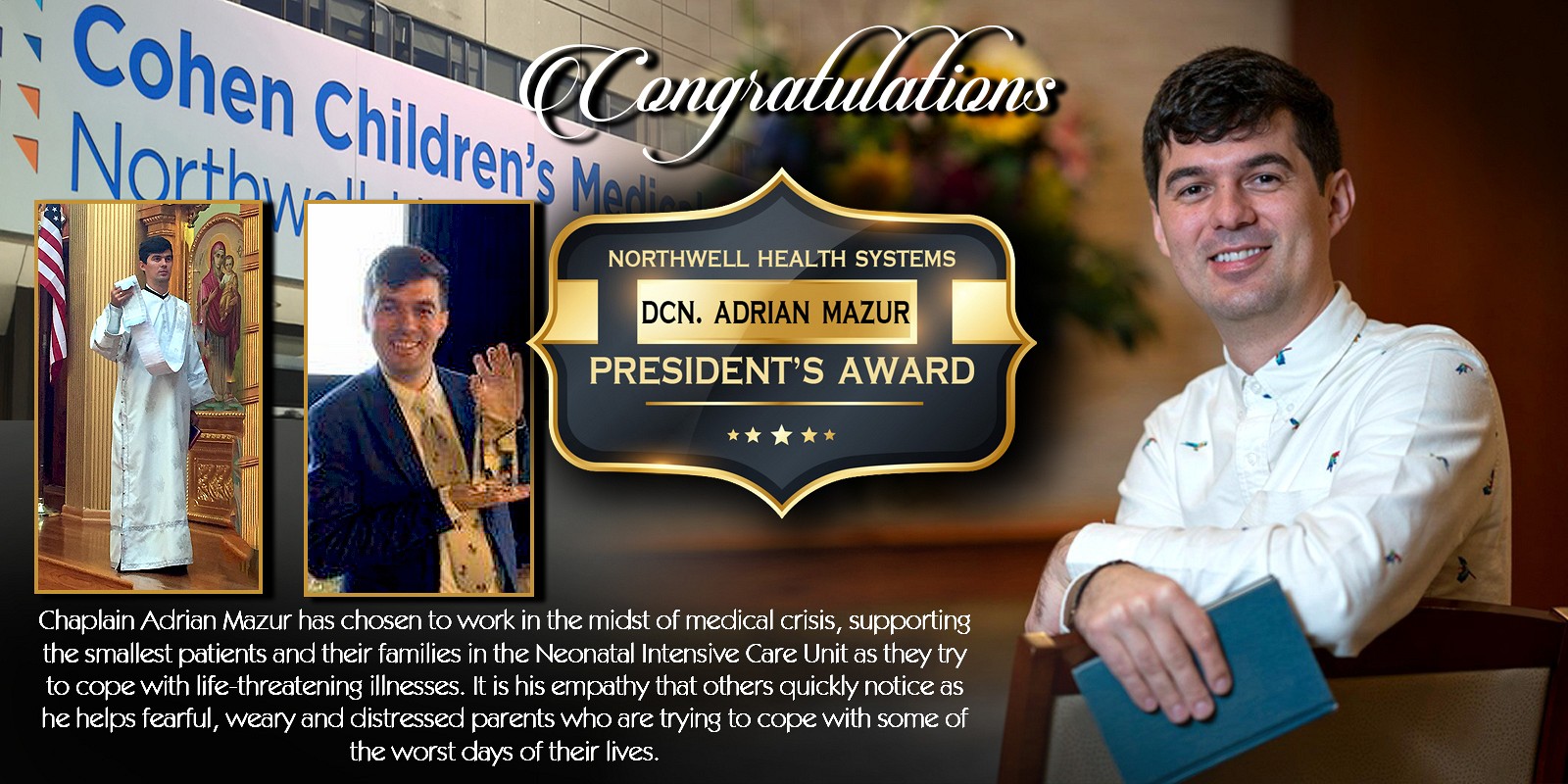 Deacon Adrian Mazur is a M. Div. graduate of St. Sophia Ukrainian Orthodox Theological Seminary of the UOC of the USA and North Shore Long Island Hospital Clinical Pastoral Education Program, assigned to Holy Trinity Ukrainian Orthodox Cathedral, New York City, as an assistant to the Cathedral Priest – his father – V. Rev. Todor Mazur.  After completing his seminary education and the CPE program he was immediately hired by Northwell Hospital, which is part of the Northwell Health medical system consisting today of 23 hospitals in the New York City and Long Island area.  The system is the largest health care system, and the largest employer in the state of New York, with over 63,800 on staff.

Since 2007 Northwell has honored employees/team-members of the system with President’s Awards.  Such honorees are those “who truly represent the very best of Northwell Health. Each year these awards celebrate inspirational team members who surpass our expectations and standards of excellence and display compassion and innovation in everything they do.”  The program honors team members in five categories:  Physician of the Year, Nurse of the Year, Leader of the Year, Teamwork, and Exceptional Patient/Customer Experience.

The President and CEO of Northwell stated that “Our mission of caring for our patients and our communities is at the center of everything we do and our journey together is guided by our vision and values.  The President’s Awards showcase the explorers, pioneers and team members whose spark and instinct to care bring our mission to life in extraordinary ways.”

Deacon Adrian is a key team-member in the Department of Pastoral Care, as a Chaplain in the Oncology Department at Cohen Children’s Medical Canter.  He was nominated for the Exceptional Patient/Customer Experience Award by his immediate supervisor, Amy Karriker, Director of Chaplaincy Services in the Cohen Medical Center.  A portion of her nomination reads: “Although we all hope for positive outcomes for all our patients, the reality is that not all will survive.  In these most difficult times, Adrian’s ability to comfort and console becomes most important.  In a letter, one parent said ‘Adrian became one of the most important people in the hospital’.”

The nomination continued:  “Chaplain Adrian Mazur has chosen to work in the midst of medical crises, supporting the smallest patients and their families in the Neonatal Intensive Care Unit as they cope with life-threatening illnesses. It is his empathy that others quickly notice as he helps fearful, weary and distressed parents who are trying to cope with some of the worst days of their lives.”

“Adrian, who came to the ministry from an earlier career in finance and volunteer work – especially with orphanages in Ukraine (under the auspices of his Ukrainian Orthodox Church of the USA – ed.), also works with adolescents in pediatric hermatology/oncology.  There, he helps to establish a connection and genuine trust as the young patients face their own mortality, changes in their appearance and an overall loss of health and stamina.”

“Often, Adrian plays a significant role in the lives of families that ultimately lose their child to illness.  In one instance, he drove through a snowstorm to be with one such couple at the birth of their next child.  It is through his presence, compassion, dedication, prayers and listening ear that he helps patients and parents redefine their hopes and maintain their dreams. Adrian’s presence brings a vitality to the hospital and all those he touches.”

The President’s Awards were announced at the Annual Meeting of the Board of Trustees of Northwell Health.  Nearly 1,000 administrative and staff members of the system were present.  Deacon Adrian was one of five finalists in the Exceptional Patient/Customer Experience award category.  When he was announced as the winner all those present from Cohen Medical Center erupted with joy and the Deacon nearly hit the ceiling as he jumped from his chair to accept the award.  His supervisor, fellow staff member from Cohen Center, and its Head Administrator were absolutely certain that he would win, saying that “there was no way he would not be selected.”  A special selection committee comprised of non-Northwell employed individual business and community leaders throughout the New York/Long Island area, reviews all nominations and makes award decisions.

We congratulate Deacon Adrian at this tremendous honor and pray that our Lord will strengthen and guide him to greater accomplishments in His Name amongst those he has been called to serve.  This is the first time in Northwell Health’s history that this award has been presented to a member of the Pastoral Care unit.  May he enjoy every aspect and reward that accompanies this President’s Award and work to outdo himself each year.  An official banquet and program will be held in July to honor all the President’s Awards recipients along with their invited families and friends.