Over $15,000 has been raised for the needs of the Pirogov First Volunteer Mobile Hospital from the sale of Icons on Ammo Boxes during exhibitions in the parishes of the Ukrainian Orthodox Church of the USA. The local parish exhibits were held under the “Buy and Icon – Save a Life” joint project of the PFVMH and artists Sofia Atlantova and Oleksandr Klymenko. The amount seems to be not final since several potential buyers are still considering a purchase of icons.

With the blessing of the Council of Bishops of the Ukrainian Orthodox Church of the USA, several parishes of the Church hosted the exhibit in order to raise awareness and to collect financial assistance for the wounded soldiers and their families of the ongoing war in eastern Ukraine.

The Metropolia Center of the UOC of the USA hosted a major exhibit of icons, dedicating the entire event to the memory of the lost heroes of Ukrainian Maydan of 2014 – The Heavenly Hundred. The event was organized by the Consistory of the Ukrainian Orthodox Church of the USA in cooperation with the Ukrainian History and Education Center, benefitting the Pirogov First Volunteer Mobile Hospital (PFVMH), which is the largest nongovernmental project involving civil health professionals in the provision of medical assistance in the zone of Joint Forces Operation (formerly “Anti-Terrorist Operation”), which is carried out in certain districts of Donetsk and Luhansk Oblasts of the Eastern Ukraine. 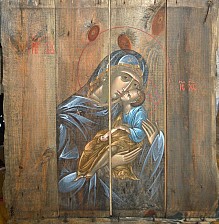 His Eminence Archbishop Daniel, in the presence of Metropolitan Antony, opened the Memorial exhibit of the icons, written on ammo boxes, which were brought from the combat zone, and once painted, delivered to the United States of America for the exhibition and charitable sale. This exhibit-sale is set to benefit the Charitable Foundation “Pirogov First Volunteer Mobile Hospital” which exists in cooperation with the Health Ministry of Ukraine, the Defense Ministry of Ukraine and the General Staff of the Armed Forces of Ukraine with support from the National Security and Defense Council of Ukraine.

Archbishop stated that during its operation in the ATO/JFO zone, the PFVMH has provided timely and skilled medical care to over 56,000 patients. The hospital has been stationed in 49 locations of Donetsk and Luhansk Oblasts – in cities and villages as well as in the field and at checkpoints on the contact line.

Introducing Gennadiy Druzenko, the acting president of the PFVMH, Vladyka Daniel offered the sentiments of gratitude of everyone in attendance for the important charitable work done in providing care for the wounded soldiers and their families.

Mr. Druzenko stated that in the fall of 2015, the PFVMH extended its activities to peaceful regions of Ukraine and performed unprecedented cardio screening in the Khmelnytsky region, which covered 22,433 persons in 565 localities.

According to Oleksandr Klymenko, the exhibitions generated quite an interest and have become the project’s most successful so far. Both Americans of Ukrainian origin and those in no way related to Ukraine came to see the icons. This allowed the organizers and the artists to tell the truth about the war in Ukraine to many people beyond the seas.

“There is no doubt now that the PFVMH will not only financially survive until the Day of Medical Worker in June, repair its worn vehicle fleet, and ‘re-shoe’ it with summer tires but will also be able to implement a few important short-term projects in Eastern Ukraine,” Gennadiy Druzenko commented.

"Buy an Icon - Save a Life" is an art project of Kyivan artists Sofia Atlantova and Oleksandr Klymenko aimed at supporting the PFVMH in employing civilian medics to provide medical care to both militants and civilians in the Anti-Terrorist Operation / Joint Forces Operation zone in Eastern Ukraine. Earlier, exhibitions of icons on ammo boxes, brought from the combat zone, were held in Antwerp, Berlin, Bonn, Brussels, Catania (on Sicily), Cologne, Edmonton, Frankfurt am Main, The Hague, Hanover, Krynica-Zdrój (in Poland), Leipzig, Los Angeles, Lublin, Milan, Munich, Prague, Rome, Toronto, Vienna, Vilnius, Warsaw, and Winnipeg, as well as many Ukrainian cities.

The exhibit remains in the United Sates of America and will be displayed at the Consistory building of the Ukrainian Orthodox Church of the USA (135 Davidson Ave; Somerset, NJ 08873) on March 4, 2019.

Over $15,000 Raised for Wounded Soldiers in Ukraine via Icons on Ammo Boxes Exhibition in the Parishes of the UOC of the USA

Latest News
00000
Statement Regarding Developments in Medicine: COVID-19 Vaccines & Immunizations
00001
Join us for the Online Live Broadcast of the Ordination to Deaconate of the Seminarian of St. Sophia Seminary - Subdeacon Myroslav Mykytyuk
00002
HALKI SUMMIT IV - “COVID-19 AND CLIMATE CHANGE: Living with and Learning from a Pandemic”
00003
Metropolia Center of the UOC of the USA Participates in the National Moment of Unity and Remembrance of COVID-19 Victims
00004
Celebration of the Glorious Feast of THEOPHANY (Baptism) of our Lord and Savior Jesus Christ
00005
Sunday Before Theophany at the Metropolia Center of the UOC of the USA
00006
The Feast of the Naming of the Lord at the Metropolia Center of the Church
Pastoral Reflections
00000
Іван Хреститель - Голос Вопіющого в Пустині
00001
On the Baptism of Christ
00002
Втеча від Ірода — втеча від гріха
00003
Understanding the Nativity Icon
00004
Genealogy
00005
Наближається Різдво...
Upcoming
00000
Archbishop Daniel's Liturgical Schedule
00001
Order Calendar 2021 / Orthodox Daily Planner
00002
Order Your Copy of 2021 UOC of the USA Calendar
00003
Month of JANUARY in the Life of the Church - Місяць СІЧЕНЬ в житті Церкви
00004
Nativity of our Lord - Seminary CHRISTMAS CD - Order Today!
Recent Galleries