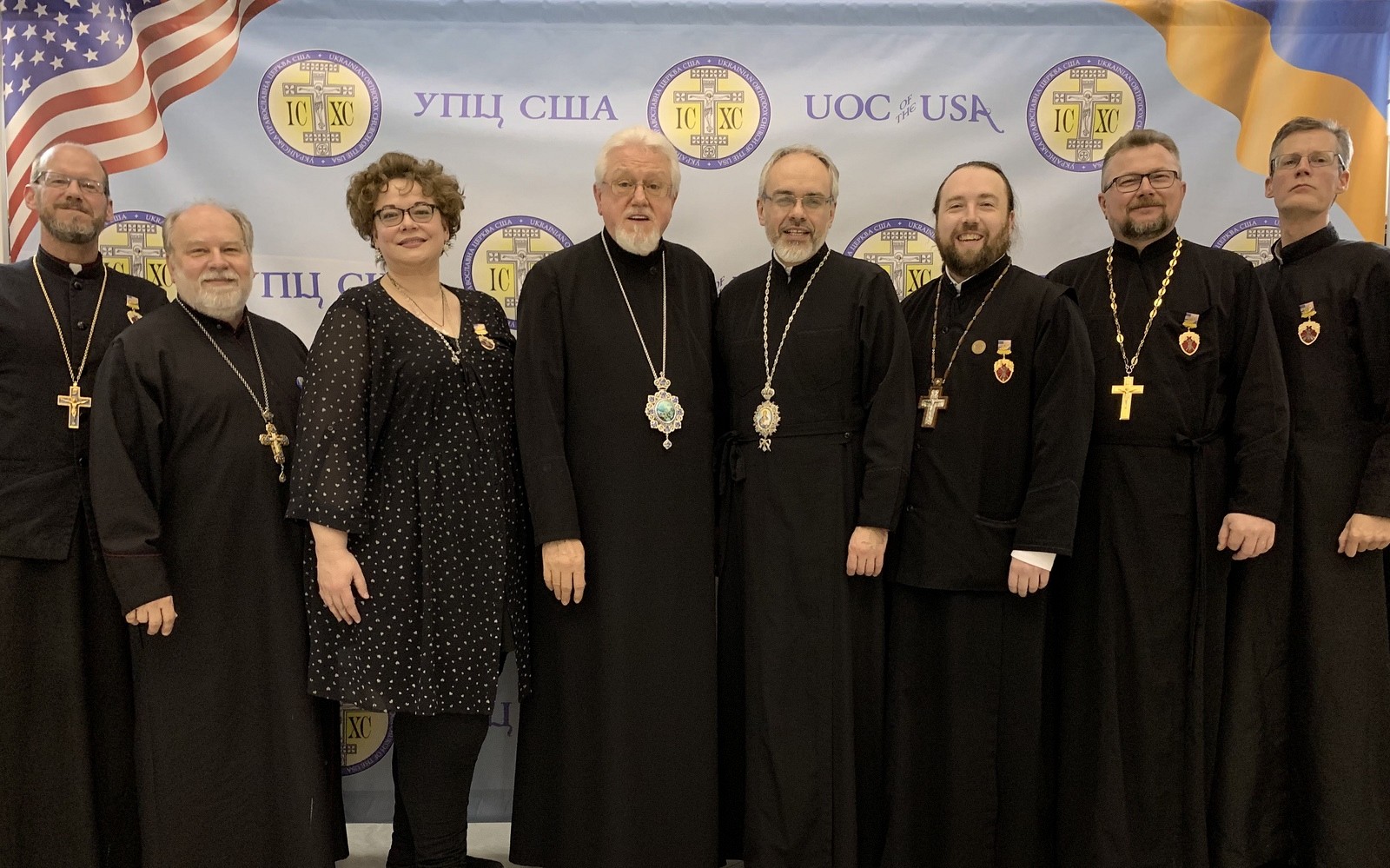 2018 will go down in the record books.  The previous 12 months have been filled with excitement, anticipation, joy, anxiety, and hope - hope in God, and hope in a bright future.

Over the previous year the faithful of the UOC of the USA have come together in worship, prayer, mourning and celebration.  The year began filled with joy and anticipation during the Nativity Season with a myriad of parish visits and events, which included a successful “Christmas at the Seminary” and “Caroling for Christ” at the Ukrainian Cultural Center.

As the Nativity celebrations began to wind down, preparations for the major event of the year began in earnest.  2018 marked 100 years of ministering of the UOC of the USA to the faithful - baptizing, marrying, supporting, educating and converting thousands over the years.  In July the Metropolia Center would host a magnificent celebration of those first 100 years.  A historical Commemorative Book was creating detailing Church history, as well as parish listings.  Speakers and performers were booked, and guests were invited.

Running consecutively with the 71st Ukrainian Orthodox League Convention, the Centennial Celebration in South Bound Brook, NJ, began with the Ukrainian Historic and Education Center’s Centennial Museum Exhibit “Ukrainian Orthodoxy in the New Land:  100 Years in the United States of America”.   Sadly, His Eminence Metropolitan Antony was only able to attend the first day of the celebration, due to being injured in an automobile accident.  Guests from all around world joined the faithful in the U.S. to celebrate a momentous and memorable event.

His Eminence Archbishop Daniel, newly returned from celebrating 1030 years of Orthodoxy in Ukraine, served the first Divine Liturgy of the next century in the St. Andrew Memorial Church, which overflowed with faithful.

A second Centennial Celebration took place at All Saints Camp in Emlenton, PA., followed by a third in Los Angeles, CA for the faithful in the western states.  During each celebration several “Centennial Medals” were awarded to deserving faithful who had contributed to the success of the Church.

2018 saw the successful launching of the St. Sophia Seminary Library Book Club, which met monthly and featured guest speakers who spoke about their books, and topics of interest.  These monthly meetings were shared live over Facetime and reached hundreds who eagerly awaited each month’s program.

Adding to the spiritual nourishment of the faithful, several parishes were honored to host the Kardiotisa, “The Tender Heart” myrrh-flowing, miraculous icon of the Virgin Mary.  The icon brought together hundreds of faithful at each visit, gracing them with the love of the Lord, healing and strengthening all who approached with faith.

Throughout the year the hierarchs visited dozens of parishes from the east to the west, celebrating anniversaries, centennials, and marking special events at the parishes.  In addition to visiting the faithful in the United States, His Eminence Archbishop Daniel made pastoral visits to Europe, Brazil and Australia, as well as joining Canada during their Centennial Celebration.

The Metropolia Center was visited this year by a number of faithful from all around the world, including a number of dignitaries who came to worship, venerate the sacred sites, and lay flowers at the memorials.

Sadly, in May the Church mourned the loss of Very Rev. Fr. Bazyl Zawierucha of Blessed Memory, who was not only a parish priest, but, a member of the Consistory Board, the Seminary Board, the Metropolitan Council and an instructor at the Seminary.

In September the Church also mourned the loss of a much beloved priest - Very Rev. Fr. John Harvey, who had served faithfully and will be missed by hundreds.

This year marked the 25th Anniversary of Repose of Metropolitan and Patriarch Mstyslav of Blessed Memory.  The Patriarch was fondly remembered during a special event which brought guests in from across the world to honor his memory.  The UOC of the USA also commemorated the 85thanniversary of the Holodomor in several ceremonies, including a synchronized world-wide candle-lit commemoration. 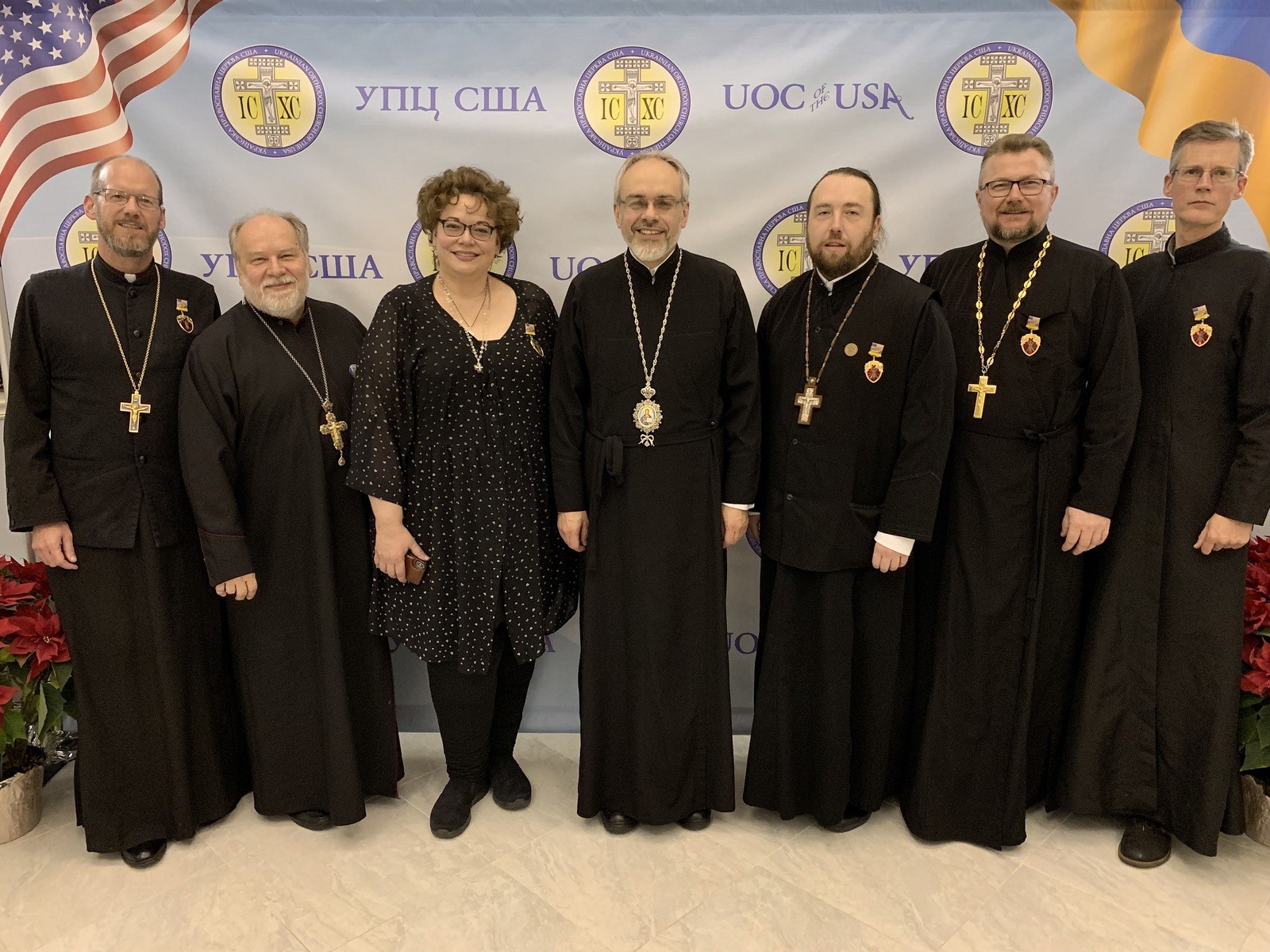 2018 will go down in the history of Ukraine, for being the year that saw the establishment of a Pomisna-Local Ukrainian Orthodox Church.  To that end the UOC of the USA was honored that His Eminence Archbishop Daniel had been selected as an Exarch of the Ecumenical Patriarch to represent His All-Holiness Patriarch Bartholomew.  His Eminence worked tirelessly for months, traveling between Constantinople, Ukraine and the U.S. to fulfill his duties here.  At the conclusion of his duties as Exarch, His Eminence was awarded the Highest Award of the Ukrainian Parliament.  The Honorary Diploma and award was granted on behalf of the Verkhovna Rada, thanking him for his extraordinary dedication, diligence and self-sacrifice on behalf of the Ukrainian nation and her people.

While His Eminence was in Ukraine busy helping establish a local Ukrainian Orthodox Church in Ukraine, he also assisted those in need by gifting funds and supplies to the elderly in Mariupol who are suffering due to war, as well as injured soldiers, widows and orphans.

Over the year many tragedies and issues arose in the United States, as well. The hierarchs were quick to express concern, pray for and offer pastoral advice in these crises including the children of refugees, fires which engulfed the western states and terrorist activities.

This year the UOC of the USA unveiled a new web page which offers a more dynamic and detailed access to the life of the Orthodox Church, as well as news, events and scheduled programs, not to mention an astounding aerial view of the campus and grounds.

Having reviewed the previous year’s activities, the Consistory Board scheduled events for the coming months, eager to write the next chapter of the Ukrainian Orthodox Church of the U.S.A.

Before closing the meeting and heading to the atrium to help decorate the Consistory Christmas Tree, His Eminence Metropolitan Antony and His Eminence Archbishop Daniel, expressed their heartfelt gratitude to the Board Members for their dedication and hard work over the previous year.  2018 was a rollercoaster of emotion, with highs and lows, yet with everyone’s selfless dedication, hard work, and dependence on Christ, everything thankfully turned out well.  In appreciation, the hierarchs bestowed each member of the Consistory Board with a “Centennial Award” which the members humbly accepted.

With both hierarchs back at their desks, their 2019 planners already filling up fast, the next year promises to be even busier than the last.  With the Sobor taking place this year, building renovations, events and commemorations, the hierarchs, clergy and faithful of the UOC of the USA have a wonderful year to look forward to.