Metropolitan Antony and Bishop Daniel Participate in the Observance of the 25th Anniversary of Ukraine’s Independence in Kyiv, Ukraine

Thousands of people arrived to the capital of Ukraine - Kyiv on August 24, 2016 to take part in the historic observance of the 25th Anniversary of Ukraine’s Independence. With the blessing of His All-Holiness Ecumenical Patriarch Bartholomew I and upon the invitation of President of Ukraine Petro Poroshenko, His Eminence Metropolitan Antony, accompanied by His Grace Bishop Daniel, represented the Ecumenical Patriarchate and the Ukrainian Orthodox Church of the USA and Diaspora during the formal festivities of the silver jubilee.

President Poroshenko in a televised address, speaking to the gathered representatives of Ukrainian diaspora from across the globe, expressed his firm support of the recent letter of Ukrainian Parliament to the Ecumenical Patriarchate, seeking the resolution of the ecclesiastical division that exists in Ukraine among Orthodox Christians. Speaking to the audience at the National Opera House in Kyiv, President Poroshenko offered gratitude to the hierarchs of the Ukrainian Orthodox Church of the USA and Canada for their support and assistance in the process of finding a resolution to the ecclesiastical division that exists in Ukraine.

In the early hours of August 24th, as the world-wide community formally entered into the observance of 25th Anniversary of Ukraine’s Independence, Metropolitan Antony, accompanied by Bishop Daniel, took part in the prayer service of “Prayer for Ukraine” at St. Sophia Cathedral, which was conducted by the All-Ukrainian Council of Churches and attended by President Poroshenko and his wife Maryna with children, as well by the speaker of Ukrainian Parliament Andrij Parubiy and other leaders of Ukrainian government.

The ecumenical prayer service consisted of prayers and statements of various religious leaders, praying for the nation of Ukraine in the times of economic, political and spiritual difficulties. Most importantly the prayers were offered for the members of Ukrainian armed forces that continue to defend the sovereign borders of a young nation with the history of many centuries of prosperity and struggle for independence.

His Eminence Metropolitan Antony, being the representative of the Ecumenical Patriarch and Metropolitan of the Ukrainian Orthodox Church of the USA and Diaspora opened the prayer service with a prayerful statement/greeting of the Ecumenical Patriarch. Metropolitan, while offering a formal greeting, expressed the Patriarch’s continued prayerful concern for all the faithful of the “daughter Church and faithful of Ukraine”. Further, he stated that “His All-Holiness is well aware of the fact that the Church of Ukraine following the baptism of the nation into the Holy Orthodox Faith, always served as the moral conscience of the nation.  During the many and varied oppressions the nation endured, including the most recent – the communist occupation – the Church was forbidden to fulfill this roll of the moral conscience.  Now 25 years after the declaration of Ukrainian independence, she still cannot fulfill it because she is divided and cannot speak and preach with one voice. This situation has profound consequences for the faithful throughout the nation.” Metropolitan continued by stating that the Patriarch prays for the final resolution of the divisions within the life of the Church and faithful of all Ukraine and most especially for an end to the disastrous war against aggression in Eastern Ukraine, which has claimed countless lives since 2014.

Following all the statements, President Poroshenko approached each of the religious leaders to express his sincere gratitude. The President expressed his gratitude to Metropolitan Antony for “an important message” to him and to the people of the nation.

The day continued with the military parade on the main street of Kyiv- Khreschatyk, in which some 4000 men and women of Ukrainian armed forces took part, exhibiting the technological, logistical and men strength of Ukrainian Army and ability to protect her borders from foreign invasion.

In the afternoon hours of August 24, 2016 a Presidential reception took place on the grounds of St. Sophia Cathedral.  Over 500 diplomats, government officials, religious leaders had the opportunity to meet in an informal setting.  Speaking to Ukrainian government official and representatives of foreign diplomatic representations, Metropolitan Antony and Bishop Daniel learned about a great deal of interest that support that foreign governments offer Ukraine, especially in the times of economic uncertainty. Among the political leaders with whom both hierarchs of the UOC of the USA met at length were Apostolic Nuncio of Vatican to Ukraine Archbishop Claudio Gugerotti, Ambassador of United Kingdom to Ukraine Judith Gough, Ambassador of the United States of America to Ukraine Marie Yovanovitch and Bishop Jan Sobilo, Assistant Bishop of Zaporizhia Roman-Catholic Diocese.

His Eminence Metropolitan Antony and His Grace Bishop Daniel departed Ukraine on August 25th while visiting the Ecumenical Patriarchate in Constantinople (Istanbul, Turkey). The hierarchs of the Church returned back to the United Sates of America on Friday, August 26, 2016. 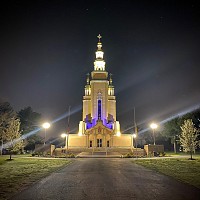