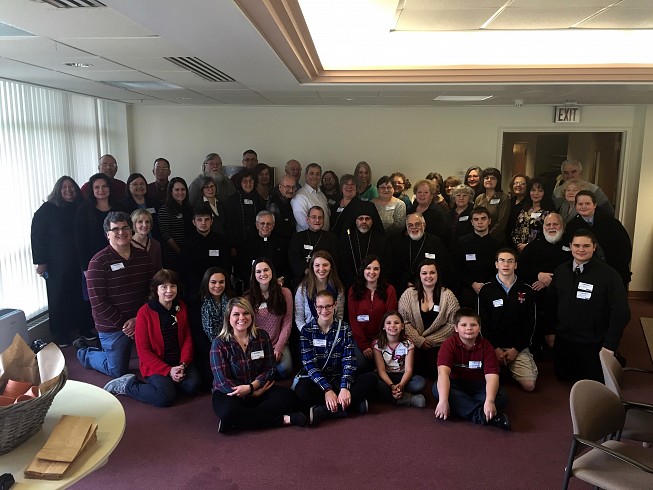 A day (by all accounts) that proved to be filled with “grace” and the Holy Spirit. Even as the earth—in our hemisphere—begins a new cycle of birth, renewal and growth, so, too, did clergy and faithful as they gathered with open hearts in fellowship and prayer at the Villa Maria Education and Spirituality Center in Villa Maria, Pennsylvania.

The day began with morning prayers, registration, a Continental Breakfast, and warm greetings from Stephanie Rimedio, retreat Co-chair and Michael Komichak, UOL National president. The V. Rev. John Harvey, Dean of the Penn-Ohio Deanery and pastor of SS. Peter & Paul, Youngstown, Ohio, briefly reflected on the theme of the day “Grace Shining Forth. . . Growing in Orthodoxy, Growing in Ministry.”

Bishop Daniel used his story—a deeply moving one—to illustrate how “grace” transformed his life—from throwing stones at icons in an atheistic society to priest, theologian and bishop—and in what way “grace” transforms ours. Moreover, by what means Great Lent helps effect that change; thus, preparing us to minister to others. Then, Dr. Chaney spoke about “Planting the Seed - Ministry to the Young. She used her experiences as a parent, teacher and co-founder and principal of Three Hierarchs Orthodox School to provide actions, insights and learning, not only on how the child develops, but also how to apply the resources and wisdom of holy scripture and tradition and all the church has to offer, especially prayer to meet the challenges—all family members and the church—confront in raising our children and keeping them in the Orthodox faith.

Sessions concluded with a discussion of Ministry to the Young at Heart conducted by Oxsana Byzckalo, MS. who shared her insights on meeting the spiritual needs of older adults gained through 23 years of service in hospice and health care, emphasizing the importance of meaning, purpose and our “presence” in their life, as well as giving love, receiving love, forgiveness, creativity and hope.

Fr. Gregory Becker, choir, church school, and adult education director at SS. Peter and Paul UOC in Youngstown, summarized what we learned and how it all tied together. He stated that, “. . .I want to tell you I really feel that the grace of the Holy Spirit was in our group today. It was something you could feel. I still have some goose bumps—spiritual goose bumps. . .”

At 12:30 PM, everyone enjoyed lunch served in the center’s dining room, the gift shop, walks around the grounds, and most especially, fellowship and lively discussion. The day concluded with informal conversation with speakers and clergy, confessions, Vespers (with responses led by Father Gregory Becker) and Pizza.

These are just a few of the comments participants shared about the retreat.

“The retreat was much more than I expected. I came away with a new perspective. The speakers gave me much more to think about with regard to my faith. I now have a path in front of me that I did not have before. Bishop Daniel was so inspirational in his presentation of where he has been and where he is now with regard to Orthodoxy. Christal’s talk opened my eyes regarding the impact that our faith has on every aspect of life, even though she was talking about children.”

"My perspective was changed by the retreat “Grace Shining Forth. . .” Many years ago, while at Family Fest the first time, I heard +Bishop Paisius (of blessed memory). It was then that I fell in love with Orthodoxy. This retreat renewed my faith.”

“The retreat was not only educational, but also inspiring to me. It helped me refocus on what it means to be an Orthodox Christian. Bishop Daniel helped me put into perspective that our journey to eternal life is a day-to-day process. Christal Chanel also spoke about how to keep the youth in the church, which is a struggle for my parish. But, she said to keep trying and most importantly to listen to our children. Truly inspiring retreat that makes me blessed to be an Orthodox Christian.”

Each participant received a folder of materials, including an Adult Great Lent and Pascha Coloring Book (colored pencils or makers); the Akathist to the Theotokos for Children; the Council of Bishops’ Lenten Greeting; “Be the Bee” a reflection from “Good and Evil Thoughts,” + St. Paisios of Mt. Athos; a church assessment article, “How Good is Your Church Anyway;” copies of the PowerPoint Presentation; and a “Hold the Date” notice announcing the date of next year’s retreat at Villa Maria.

We are indeed grateful to our speakers and facilitators, His Grace, Bishop Daniel, Dr. Christal Chaney, Oxsana Byczkalo, Fr. John Harvey and Fr. Gregory Becker. This year’s committee included: Fr. John Harvey, spiritual advisor, co-chairs Stephanie Rimedio and Marianne S. Carmack and Pauline Witkowsky, supported by the advice, counsel and enthusiasm of Michael Komichak, national UOL president. We’re already planning next year’s UOL Lenten Retreat 2017 at Villa Maria Conference and Retreat Center on March 18, 2017. We hope to see you there! May you have a blessed Great Lent filled with peace, hope and love and a joyous and radiant Pascha.

Latest News
00000
Celebration of the Exaltation of the Life-Giving Cross of the Lord at the Metropolia Center of the Church
00001
Let's Honor His Eminence Metropolitan Antony on the 35th Anniversary of Archpastoral Consecration
00002
Faith, Hope and Love - Home Edition!
00003
Consistory of the UOC of the USA Holds Virtual Meeting
00004
COVID-19 Resources that Offer Prayerful Help
00005
Ukrainian Orthodox League Lecture Series 2020
00006
OCAMPR ​2020 Conference ​"Christ, The Measure of Wellness: Healing Mind, Body, and Soul”
Pastoral Reflections
00000
The Universal Exaltation of the Precious and Life-Giving Cross!
00001
Nativity of the Birth-giver of God
00002
Заповіді Любові
00003
Запрошені та не йдуть
00004
Repent, for the kingdom of heaven is at hand!
00005
Виноградарі
Upcoming
00000
Archbishop Daniel's Liturgical Schedule
00001
Calendar 2020 / Orthodox Daily Planner
00002
Month of SEPTEMBER in the Life of the Church - Місяць ВЕРЕСЕНЬ в житті Церкви
00003
Month of OCTOBER in the Life of the Church - Місяць ЖОВТЕНЬ в житті Церкви
Recent Galleries