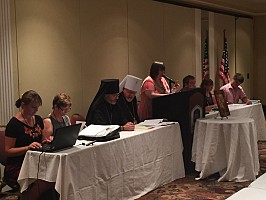 The Senior UOL Chapter of the Dormition (Assumption) of the Birth-Giver of God Ukrainian Orthodox Church in Northampton, PA have worked tirelessly over the last two years preparing for this memorable week of faith, fellowship and most of all, fun. That preparation is evident as the events of the first few hours have been thoughtfully conceived and flawlessly executed, thus welcoming over 100 delegates from various chapters from across the country.

The first full day of the Convention started on Wednesday evening with the formal opening proceedings, welcoming the delegates of the convention to Lehigh Valley. Mr. Michael Komichark, Senior UOL President and Ms. Kateryna Kocelko, Junior UOL President, along with the Convention spiritual father – Very Rev. Fr. Bazyl Zawierucha and co-chairs of this year’s Convention Mrs. Linda Winters and Martha Misko opened the working sessions of the Convention with the words of hope and a vision towards the future that touches the lives of the generations of the Ukrainian Orthodox Christians across the USA. Following the formal opening remarks, the reciting the Pledge of Allegiance to the flag of the United States and chanting the anthem of the country took place and the Junior Convention body adjourned to their own conference room to begin their deliberations.

With the blessing of His Eminence Metropolitan Antony, His Grace Bishop Daniel, the President of the Consistory of the UOC of the USA opened the business session with the archpastoral address, reminding the delegates of the need for the successful and spiritually oriented chapters and parishes today and in the future because with the growing number of forces undermining the stability of family life and with the increasing mobility of our society with its concomitant fruits of isolation, alienation and depersonalization, there is less structure within our nation for people to come together and to support each other through mutual interdependence. Yet the basis of our Christian faith and indeed of healthy human living depends upon this mutual interdependence, upon our willingness to be aware of and concerned about one another. The UOL chapters are the place where this interdependence can and should happen, the place where support systems for Christian formation and Christian living must constantly be developed and fashioned in light of changing needs and changing circumstances. 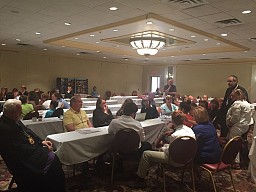 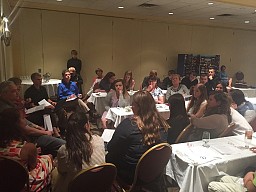 Most of the evening Senior Sessions were spent in committees, starting the work that will be presented to the entire Convention body beginning on Friday evening.

The second day of the Convention, the feast day of Holy Equal-to-the-Apostles Great princess Olha, began with the celebration of the Divine Liturgy. His Eminence Metropolitan Antony, the Primate of the UOC of the USA presided over the liturgical service, which was concelebrated by Very Rev. Bazyl Zawierucha, a pastor of Assumption of the Birth-Giver of God Ukrainian Orthodox parish in Northampton, PA and a spiritual advisor of Senior UOL Very Rev. Fr. John Haluszchak and a spiritual father of the Junior UOL Rev. Fr. Vasyl Sendeha. Mrs. Linda Winters and chanters of Holy Dormition parish along with the delegates of the Convention directed the prayerful chanting.

In his remarks Metropolitan Antony reflected on the life of the enlightener of the Kyiv Rus, who by her personal example turned to Christ and was able to change her path of life, serving and leading others to the salvific path of Christ.

Following the Divine Liturgy, the first business session of the day began with the Archpastoral address of the First Hierarch of the Ukrainian Orthodox Church of the USA – His Eminence Metropolitan Antony, who stated

“The theme for this convention – “Put off the old, put on the new man; Be children of God; Walk in Christ the Light” (Eph. 4: 17-5, 10) – is one of the most powerful and meaningful themes I can remember for a UOL convention. The whole process suggested in the theme begins in the Sacraments of Holy Baptism and Chrismation, where the “old” is put off as the one baptized is immersed in the Baptismal waters and arise from the waters reborn into the “new” and clothes him or her self in Jesus Christ our Lord, becoming a child of God and beginning the life-long walk in the Light of Christ – as the Priest leads him or her on their first steps about the baptismal font and the table upon which the Holy Gospel rests. The Godparents carry candles in this procession representing the Light of Christ.  The walk in faithfulness to the Holy Gospel is in a circle – meaning eternity – symbolizing that our walk will be life-long.

"We must conform our lives to Christ as the days, months and years go by, relying on the Grace we received these Sacraments and that, which we will receive through all the Sacraments in the future – in particular the Holy Eucharist – to keep us on the straight and narrow path all the way to salvation in the Kingdom of God.  All too often we fail to count on that Grace – on the power we have within to work miracles in our own lives and in the lives of others around us.

In order for that Grace to work in us leading us on the path of Theosis – the process of becoming more holy and Christ-like within so that we are able to image or reflect Christ without.  St. Peter in his second epistles calls us to become ‘partakers of Divine Nature’ – by becoming part of the energy of God, rather than His Essence. We can never know the Essence of God, for that would make us Gods, as well, which is impossible. Becoming part of God’s energy, His love, power, life and glory, for example, is our goal. It is a constant process of self-examination so that we come to know ourselves – all our strengths, our weaknesses, our faults, our egocentrisms – for if we know not ourselves, we will never comprehend who we are in relation to Christ our Lord. When we know ourselves, St. Peter continues, ‘we will be neither barren not unfruitful in knowledge of Christ.’”

The convention body again broke out into working committees to continue the effort begun last evening.  Following the committee meetings, their reports were prepared for consideration by the entire convention body.

Before the conclusion of the business day, Senior UOL President Michael Komichak presented Protodeacon Ihor Mahlay, President of St. Andrew’s Ukrainian Orthodox Society, with a check to benefit St. Andrew's Society (in the amount of $5,450). These funds were raised by the “Souper Bowl” Sunday initiative and Thanksgiving Tithing program in order to benefit the ministry of the organization that provides basic care for the needy in Ukraine. Having expressed his gratitude, Protodeacon Ihor stated that the charitable work of St. Andrew’s Society is possible in part because of the generous donations that are received from the members of the Ukrainian Orthodox League. Bishop Daniel and Very Rev. Fr. Bazyl Zawierucha shared with everyone in attendance their personal observations about the ministry of St. Andrew’s Society, as they had a first hand opportunity to visit the refugee centers and soup kitchens in Ukraine that are sponsored by the organization. 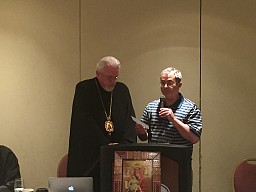 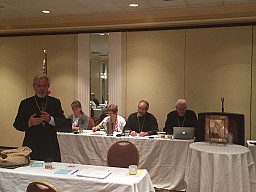 Another donation, benefitting St. Sophia Ukrainian Orthodox Theological Seminary that presently provides pastoral academic training to 6 full time seminarians and 7 part time students and seminarians of the Church, was presented to the Rector of the Seminary – His Eminence Metropolitan Antony, who stated that the donation of $3,392 will be earmarked for the needed renovations of the building and some academic advancement programs of the Church’s educational institution.

Having concluded the first full day of business sessions, Mr. Michale Komichak concluded the day with the call to everyone to participate in the Evening prayers and the BW special event sponsored by the hosting chapter.

Latest News
00000
Council of the Metropolia Meets in Virtual Annual Session
00001
Join us for a short LIVE FACEBOOK video presentation of the new Service Project in the ministry of the UOC of the USA
00002
Parishes and Ministries of the UOC of the USA are Eligible for the Latest PPP Forgivable Loans!
00003
Walking Alongside our Faithful with Special Needs: Consistory Office of Youth & Young Adult Ministry Webinar
00004
Jr. UOL Virtual Lock-In at St. Vladimir Ukrainian Orthodox Cathedral in Philadelphia, PA
00005
St. Sophia Ukrainian Orthodox Theological Seminary Begins Selection of Students for 2021-2022 Academic Year
00006
A Message From the President of the Consistory of the UOC of the USA About COVID-19 Safety Steps in the Metropolia Center of the Church
Pastoral Reflections
00000
НЕДІЛЯ ПРО БЛУДНОГО СИНА
00001
THE PRODICAL SON
00002
Humility
00003
Неділя про Закхея
00004
Meeting of The Lord
Upcoming
00000
Archbishop Daniel's Liturgical Schedule
00001
Order Calendar 2021 / Orthodox Daily Planner
00002
Month of FEBRUARY in the Life of the Church - Місяць ЛЮТИЙ в житті Церкви
00003
Month of MARCH in the Life of the Church - Місяць БЕРЕЗЕНЬ в житті Церкви
00004
The Great Lent Epistle of the Permanent Conference of Ukrainian Orthodox Bishops Beyond the Borders of Ukraine
00005
Our Spiritual Journey to Pascha
Recent Galleries