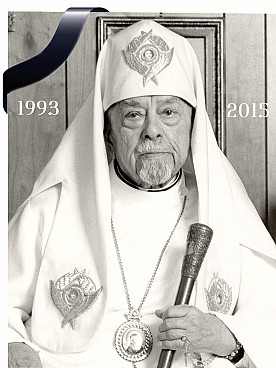 Patriarch-Metropolitan Mstyslav (Skrypnyk) served our Holy Ukrainian Orthodox Church of the USA for forty-three years as Archbishop, President of the Consistory and Metropolitan from 1950 to the day of his repose in the Lord on 11 June 1993. The twenty second anniversary of the repose of His Holiness Patriarch Mstyslav was commemorated at our Metropolia Center on Thursday, 11 June 2015.  Members of the Consistory, friends, clergy and faithful of our church gathered to recall the incredible leadership and contributions the Patriarch made in the life of our Church, especially with the establishment of St. Andrew Memorial Center and Church Headquarters located in South Bound Brook – Somerset, NJ.

His Eminence Metropolitan Antony led the commemoration with the celebration of the Memorial Service at the Holy Resurrection Mausoleum in the crypt of St. Andrew Ukrainian Orthodox Memorial Church in South Bound Brook, NJ. Clergy participating in the service were V. Rev. Yurij Siwko, Pastor of the Parish and Rev. Fr. Vasyl Pasakas, Pastor of Nativity of the Virgin Mary Parish, South Plainfield, NJ.

Surround the crypt of Patriarch Mstyslav are four rooms, which contain exhibits of events in the life of the Patriarch, including one his sets of vestments and liturgical vessels along with publications published by the Church sometimes under the direct physical supervision of the Patriarch. Dr. Michael Andrec, choir director at the Memorial Church directed the choir members and guests who were present in singing all responses during the Panakhyda.

At the conclusion of the Panakhyda, His Eminence took the time to read the inscriptions on the sarcophagus over the grave.  The first is a Gospel quote that begins each hierarchal Divine Liturgy:  “O yes, let your light shine before men, that they may see your good works and glorify your Father in Heaven.” (Mt. 5:16) The second is from the Patriarch’s last will and testament calling upon all who read it to never forget their forefathers who came before them, for those who forget what was handed down to them by preceding generations will wander in the wilderness without a future and without a legacy to leave for their descendents.

The Metropolitan stated that Patriarch Mstyslav lived the words of both quotes. His light always shone before men in the form of a charismatic leadership and presence that commanded the attention of the faithful and enabled them to praise God the Father in Heaven. He was a leader of not only the Holy Ukrainian Orthodox Church but of the Ukrainian nation throughout all his life, even though the majority of that life was spent beyond the borders of Ukraine. His influence reached beyond the iron curtain of old and moved the lives of people suffering for three quarters of a century under the communist yoke.  His faithful remembrance of those who perished for Christ, for the Ukrainian nation and who suffered oppression, suppression and genocide (Holodomor) throughout all the years of his priestly and episcopal service could never be silenced.

His Eminence expressed his oft repeated gratitude to the Lord for having studied at the feet of a remarkable and perhaps at time controversial figure.  The Patriarch was the tie between pre- and post- communist Ukrainian history. The faithful of the reborn church of Ukraine knew this and chose them to be the first Patriarch of the Ukrainian Orthodox Church in Ukraine.  Metropolitan Antony informed the faithful present about his and Bishop Daniel’s efforts, along with other hierarchs of the Permanent Conference of Ukrainian Orthodox Bishops beyond the Borders of Ukraine, with the blessings of the Ecumenical Patriarchate, to begin the work of unifying the deeply divided church in Ukraine.  Those efforts seem to have met with some success with the statement signed by bishops and clergy of the Ukrainian Orthodox Church – Kyivan Patriarchate and the Ukrainian Autocephalous Orthodox Church – calling for the unification of the two jurisdictions at a special Sobor on 14 September 2015 in St. Sophia Cathedral, Kyiv.

The Metropolitan expressed his regret that Patriarch Mstyslav did not live long enough to see this possible union, but also his joy that the Patriarch lived long enough to witness the independence of the Ukrainian nation and to return triumphantly as the spiritual leader of the faithful.  He described the many moments he spent with the Patriarch in Ukraine, whose only regret was that he was not just twenty years younger so that he could have been a more effective leader in the nation’s first years of independence. His Eminence thanked all who participated in the memorial service and called upon them to keep the Patriarch and all the leaders who have served the Ukrainian nation and her Holy Church in the past and in the present.