It is with a profound depth of sadness and prayer that the Consistory Office of Public Relations of the Ukrainian Orthodox Church of the USA prayerfully announces that the servant of God, Protopresbyter Michael Kudanovych has reposed in Christ - born to eternal life - after a lengthy illness on 28 February, 2015. May his memory be eternal!

O God of spirits and of all flesh, Who has trampled down death; You have overthrown the devil and have given Life to Your world: now give rest, Lord, to the soul of Your departed servant Protopresbyter Michael, in a place of light, a place of refreshment and a place of repose, where there is no sickness, sighing nor sorrow. As You are a Good God, Who loves mankind, pardon every sin, which he has committed, whether by word or by deed or by thought, for there is no man who lives and has not sinned. You alone are sinless, Your Righteousness is Eternal and Your Word is Truth. For You are the Resurrection, the Life and the Repose of your newly presented servant, Protopresbyter Michael, Christ our God and we give glory, together with Your Father, Who is Eternal and Your All-Holy, Good and Life-Creating Spirit, now and ever and unto the ages of ages. Amen!

His Eminence Metropolitan Antony has requested that we include Fr. Michael in our prayers and liturgical commemorations as well as participate in the funeral services.

Father Michael and pani-matka Halyna met in Germany during WWII and married in 1945. In 1947 they moved to Sao Paulo, Brazil, where he became a founding member of the Bratstvo and helped organize the building of St. Volodymyr Ukrainian Orthodox Church. In 1954, he was ordained into the priesthood and became the priest at St. Volodymryr’s.

In 1960, Father Michael and his family moved to the United States. He served as a priest in Philadelphia, Detroit, St. Paul, Rochester, NY and finally Minneapolis until his retirement in 1996.

Funeral Services For Prtoopresbyter Michael Kudanovych are Scheduled as follows: 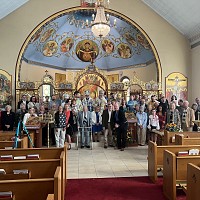