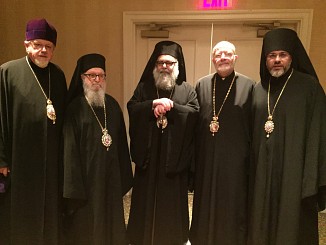 The Patriarch of Antioch, His Beatitude John X, (who is the head of one of the oldest Christian Churches in the world) traveled from Damascus, Syria to the United States of America for the enthronement of His Eminence Metropolitan Joseph as the new spiritual father of the Antiochian Orthodox Church in North America.

The enthronement took place on Saturday, December 6, 2014 at 4:30 p.m. at the Church's St. Nicholas Cathedral in Brooklyn, NY.

He now heads the entire Antiochian Orthodox Church in North America, with nine bishops, over 400 clergy, and 266 parishes and missions throughout the United States and Canada.

“On behalf of the clergy and faithful of the Ukrainian Orthodox Church of the USA, we would like to express our best wishes and congratulation upon your election to the great and sacred responsibility of a chief shepherd of the flock of the Antiochian Orthodox Christian Archdiocese of North America. We look forward to your service to the Gospel and Body of Christ in United States of America, which with God’s help, will be inspirational, bringing life-giving impulses also to the efforts toward unity in the Holy Orthodox Church on North American continent.

Your Eminence, we pray for you in the realization that the clergy and faithful of the entire Antiochian Orthodox Christian Archdiocese of North America gather around their bishop, to ensure that the ministry of Christ will continue to bear the beautiful and sweet fruit of new and eternal life.  We are of one mind and heart, praising and glorifying the name of the Father and of the Son and of the Holy Spirit.

May we always work together in brotherly love, peace, and harmony as we seek to fulfill God’s Holy Will and share in the joy of God’s blessings upon you and all your faithful flock in this moment.  We pray for the successful beginning and continuation of your service in the spiritual leadership of God’s people in America.

May all the saints that have labored for the Church in Antioch continue to intercede for you as you follow in their footsteps and continue the work that they began – for the glory of God.”

The Antiochian Orthodox Church worldwide is headed by the Patriarch of Antioch John X and is the largest Arab Orthodox Christian church in the world, with churches in the Middle East, Europe, North and South America and Australia.  It was founded by Ss. Paul and Barnabas in 42  A.D. and its first bishop was Holy Apostle Peter.

The Bible states in Acts 11:26 "And the disciples were first called Christians in Antioch."

Meeting with the Patriarch of Antioch