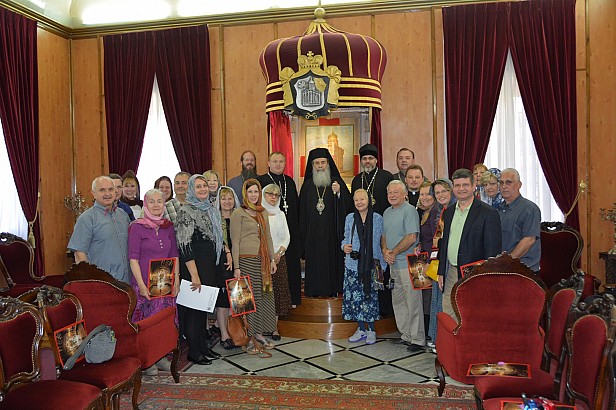 Pilgrims of the Church Visit Patriarchate of Jerusalem

Reflecting upon the answer to the daily question of the pilgrimage: “What does it mean to be an Orthodox Christian in Jerusalem?” the pilgrims of the Ukrainian Orthodox Church of the USA visited the Ancient Patriarchate of Jerusalem.

His Grace Bishop Daniel, the Ruling Hierarch of the Western Eparchy and President of the Consistory of the UOC of the USA led a group of 25 pilgrims on a visit to the Patriarchate on November 15, 2014.

Having received a blessing from the hands of His Beatitude Theophilos III, Patriarch of Jerusalem and All Palestine, the pilgrims of the Church spent about an hour with the Patriarch, learning about the history of the Patriarchate, the Order of the Brotherhood of the Holy Sepulcher and about the life of Orthodox Christians in Jerusalem and the surrounding areas that are under spiritual protection of the His Beatitude.

“For us, Ukrainian Orthodox Christians from the United States of America”, said Vladyka Daniel, “a great honor indeed, the fact that we find ourselves in the Holy Land these days… His Eminence Metropolitan Antony expresses his most sincere prayerful greetings and gratitude for your Beatitude’s time spent with us… You are the spiritual father, guardian and keeper of the All-holy sites of pilgrimage, and we respect and pray for you”.

Responding to His Grace, His Beatitude assured the pilgrims of his prayers especially mentioning the ongoing war conflict in Ukraine.

In conclusion of the meeting, Vladyka Daniel, assisted by Very Rev. Volodymyr Steliac and Rev. Anthony Perkins presented the Patriarch with the copy of the icon of the “Offering of First Fruits” depicting Sts Volodymyr and Olga holding a model of the Desyatyna Church of the Dormition of the other of God, symbolic of St. Volodymyr’s determined effort to donate 10 percent of his income and wealth to the Lord. The icon was a gift of iconographer Cheryl Pituch and her husband Eugene and his brothers in memory of parents Eugene and Julia Pituch. It is being utilized by the clergy of the UOC of the USA to educate their faithful about tithing of their own treasure, talent and time for the glory of God and the building of His Kingdom on earth.

Following the presentation of the icons, His Beatitude Patriarch Theophilos bestowed upon His Grace Bishop Daniel patriarchal panagia and pectoral crosses to the clergy of the pilgrimage. Moreover, the Patriarch hosted the group of pilgrims with some tea and pastries and in conclusion of which each pilgrim of the UOC of the USA approached His Beatitude to receive a blessing, while being presented with a gift of an icon from the hands of Patriarch Theophilos.

Pilgrims of the Church Visit Patriarchate of Jerusalem

Pilgrims of the Church Visit Patriarchate of Jerusalem - 11/15/2014