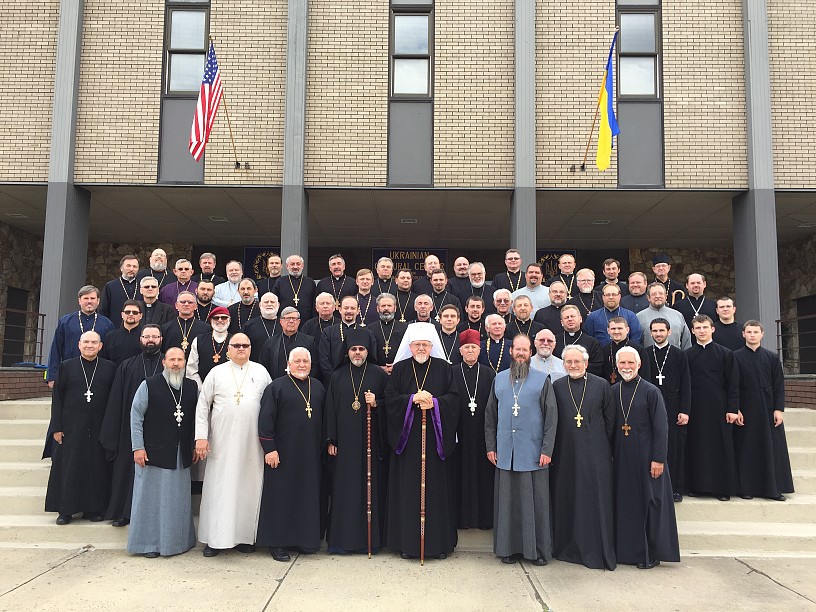 On Monday evening, 6 October, His Eminence Metropolitan Antony and His Grace Bishop Daniel welcomed the participants in Clergy Conference 2014 to the Center of the Ukrainian Orthodox Church of the USA beginning with a Vesper service in Three Hierarchs Chapel at St. Sophia Seminary. The Metropolitan reminded the priests and deacons present that theirs is an incredibly important responsibility before the eyes of God and that the Grace imparted to them during their ordinations will, without fail, provide them with all they need to fulfill that responsibility successfully. He called upon his brothers in service to the Lord that none of them, including the hierarchs, can be afforded expressions indicating lack of faith or trust in the Grace they received. “We all stand before the Holy Table and hold in our hands the very Body and Blood of Jesus Christ, imparted to us by God Himself and we, in turn, impart these precious and life-saving Gifts to those entrusted to our Spiritual Care. The very thought of this, that God has entrusted us with this responsibility and placed us at His Holy Table, must be the driving force behind all our activity in priestly service. We cannot fail in that service if we base all our actions upon what God has entrusted us with.”

In conclusion of the liturgical service, Very Rev. Fr. Tomothy Tomson and Rev. Fr. Vasyl Pasakas, speaking on behalf of the clergy of the UOC of the USA, greeted His Eminence Metropolitan Antony with the observance of the 29th Anniversary of Archpastoral Consecration. Following Vespers a reception took place in the main rooms of the Seminary where the brothers had time to reacquaint themselves with one another and to discuss what is current in their priestly service and in their parish communities. It was a joy to watch good friends rejoicing in the fact that they were together once again and that they had the opportunity to share their thoughts and concerns about their work on the local parish level.

The first full day of the conference schedule was Tuesday, 7 October. Following Moleben in the Chapel the clergy gathered in the Ukrainian Cultural Center for the first session, which provided much more than most expected in terms of guidance for their pastoral service in the local parish communities. Dr. Gayle Woloschak, PhD, DMin, Professor Departments of Radiation Oncology, Radiology and Cell and Molecular Biology, Robert E. Lurie Comprehensive Cancer Center, Feinberg School of Medicine, Northwestern University, Evanston, IL, a cradle Ukrainian Orthodox Christian and our Church’s official representative to several Orthodox organizations like Internationa Orthodox Christian Charities, Orthodox Christian Mission Center, the Orthodox Theological Association and others, spoke on “Organ Transplantation: Definition, Ethics and Orthodox Perspective”. Our second guest speaker was Very Reverend Archimandrite Nathanael Symeonides, PhD Boston University and Professor at Holy Cross Theological School, Boston, MA, Director, Inter-Orthodox, Ecumenical & Interfaith Relations, Greek Orthodox Archdiocese of America, who spoke on the topic of “Brain Death: Ethical and Theological Perspectives as related to Organ Transplantation”. A lively discussion took place during and after each presentation, which indicated the great interest the clergy had in the topics and the possible meaning for their individual pastoral service.

Following the session the clergy gathered outside of the Consistory where the hierarchs presented each of them with a personal gift of an icon of the “Offering of First Fruits” depicting Sts. Volodymyr and Olga holding a model of the Desyatyna Church of the Dormition of the other of God, symbolic of St. Volodymyr’s determined effort to donate 10 percent of his income and wealth to the Lord. The icon was a gift of iconographer Cheryl Petuch and her husband Eugene and his brothers in memory of parents Eugene and Julia Pituch. It will be utilized by the clergy to educate their faithful about tithing of their own treasure, talent and time for the glory of God and the building of His Kingdom on earth. After the distribution of the icons a procession took place across the Center property to the Transfiguration Chapel where a blessing of the icons was celebrated by Metropolitan Antony and Bishop Daniel.

Another procession took place to the Memorial Church before the Holy Resurrection Mausoleum and facing the cemetery where dozens of the predecessor clergy and hierarchs of those present are buried. A Memorial Service – Panakyda was served during which all of the deceased clergy, whether buried here or not, were commemorated by individual names. This was truly an emotional moment for many of the clergy, since their mentors and some close friends were included on that Necrology.

The conclusion of the first day came with Vespers in the Seminary Chapel once again, followed by dinner in the Ukrainian Cultural Center. The brothers had the entire evening to socialize at their hotel or elsewhere.