Liturgical Commission of the Church Meets

Following the glorious celebration of Pentecost, the members of Liturgical Commission of the Ukrainian Orthodox Church of the USA gathered via Teleconference for its 2014 quarterly meeting on June 12, 2014.

According to His Grace Bishop Daniel, who with the blessing of the Prime Hierarch of the Ukrainian Orthodox Church of the USA serves as the chairperson of the Commission, the work of the group is of extreme importance as it addresses the pastoral liturgical needs of the clergy and laity of the Church. The members of the Liturgical Commission are:

Very Rev. Fr. Harry Linsinbigler –  pastor of the Protection of the Mother of God Ukrainian Orthodox Church in Dover, FL

Considering the pastoral liturgical needs of the clergy of the Ukrainian Orthodox Church of the USA, as well as those in Western Europe, South America, Australia and New Zealand, the Liturgical Commission of the Church reviewed the release of the Service Book – Volume I and the positive feedback that was received. In addition, the members of the Commission welcomed the final proofs of the bilingual Small Prayer Book, which is set to be released in August of 2014. The 260 pages publication was popularly described of the IPhone 4 size, and it comes in a hardbound format with two separate color covers – black and white.

In addition, members of the Commission reviewed the texts for the upcoming bi-lingual publications of the Ukrainian Orthodox Church of the USA and set the following goals for the following three years:

Book of Needs – Volume II (Funeral Services of the Church)

In addition, the members of the Liturgical Commission of the Church were informed of the third draft of the popular edition of  “Divine Liturgy” (with traditional music and melodies in Kyivan and Halytsky Chants) presented in a parallel English-Ukrainian format and adopted for congregational singing or mixed choir. The work was compiled and edited by Protodeacon Ihor Mahlay and Markian Komichak, Choir Director from St. Vladimir Ukrainian Orthodox Cathedral in Parma, OH.

• Developing bi-lingual liturgical books for use of the parishes of the UOC of the USA;

• Overseeing the preparation of liturgical educational materials for publication;

• Regulating pastoral liturgical practices throughout the country and promoting studies in Sacred Music and Liturgical Theology;

• Assisting the Council of Bishops of the Church in the preparation and development of the liturgical publications and the Church Year Calendars.

The next meeting of the Commission is scheduled for the first part of autumn of this year. 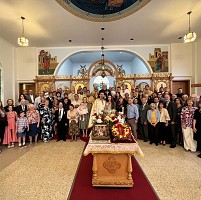