Over two thousand Ukrainian Americans gathered on Thursday, March 6, 2014, in front of the White House at the nation’s capital in Washington, DC for a peaceful and prayerful demonstration, sharing with the greater American community the conditions under which the Ukrainian society functions following the bloodshed events of the last month in Kyiv. Almost three thousand people, holding Ukrainian and American flags prayed, sang and listened to Ukrainian-American leaders reflecting on the most recent events in Crimea, Ukraine and the political and military aggression of the Russian Federation.

While offering the prayer for the peace and stability of the Ancestral Homeland Ukraine, Bishop Daniel shared with those in attendance a reflection about his most recent trip to Ukraine, while visiting the portable hospitals, wounded  protestors and the families of the fallen. Joined by Metropolitan Stefan Soroka of the Ukrainian Catholic Church, Vladyka Daniel prayerfully chanted with the thousands of Ukrainian Americans in front of the White House a traditional memorial song – “Memory Eternal” for the students of the Heavenly Hundred – ‘Nebesna Sotnia” that lost their lives protecting the basic human rights of freedom in Ukraine.

The bishop reflected on the statement of the Council of Bishops of the Ukrainian Orthodox Church of the USA, stating: “The world watches.  The world says "Stop!"  The world says "Go home!" The world says "Ukraine has the right to self-determination"!  In reality, however, what can simple words accomplish?  Will the world find the courage to do more than pronounce warnings?  Will the world, this time, ensure that Ukraine and her people will not again be subject to a new form of genocide?  Or will the world once again ultimately abandon what it considers a futile effort to force the bear back into its own domain and simply turn a blind eye and a deaf ear to the situation?  Words are simply words, with no inherent authority or power.  It is what stands behind - and before - those words that matters. No one envisions a military force entering Ukraine from the West.  This would only inflict more unnecessary damage upon the people of Ukraine - remember the last armies that came from the West who the poor Ukrainian people at first thought to be liberators? No, military force will not accomplish the necessary end. The words of modern diplomacy must be backed up with effective economic, political and social actions and sanctions, which will convince the invaders that its efforts are futile and counterproductive for its own welfare and the welfare of the people subject to it.

All our lives we have studied the history of our Ukrainian nation and throughout our ministry we have held in our arms the victims of the bear's aggression, the survivors of the suppression, repression, family separation, gulags, torture, Holodomor – death by starvation - looking into their eyes as they remember the millions of their own family members lost “for the good of the empire”.  We witnessed the joy in their faces as they thanked God for the freedom of their nation - their whole, united nation - before independence and over the past 24 years since the referendum on independence passed overwhelmingly throughout all the nation.  As the result of this, in the face of threats to that independence, that we must make demands of our political leaders, here in the United States of America and throughout the world for immediate strong, effective and honorable action before it is too late - once again.  We urge all our clergy, faithful and parish communities to be in contact with our President, Congressional Representatives and Senators, our state Governors and Legislators to stand firm in support of Ukraine and her beloved people!

We remain in solidarity with our Orthodox, Catholic and other Faith leaders in Ukraine who have proved their devotion to their flocks in their steadfast prayer and ministry to those who sat on the cold cobble-stoned Maidan.  We have personally delivered material support to the hospitals caring for the injured and the families of those murdered.  Today, however, we call upon all our brother Hierarchs of Orthodox Churches throughout the world to utilize their God-give authority, including those in Russia itself, to call for the cessation of the attack of Orthodox brothers against their own in the Faith!  We call upon Christians of other denominations and adherents of all religious Faiths around the world to urge their followers to speak up and help to avoid a cataclysm for a nation that has endured far more such cataclysms than it should have been able to endure. But, endure it did!  Only by the Grace of God was Ukraine reborn over these 24 years - in spite of weak and fractured leadership at all levels - political social, ecclesiastical and more.  The time has come to allow her to blossom, as she has begun to - without being a threat to any of her neighbors and without abandoning millennium old international relationships.

Ukraine and her people were for a significant and vital period of time, the very epicenter of world Orthodoxy.  She and her people have proven themselves by their incredible faith in our Lord and God a d Savior, Jesus Christ.  She has submitted herself to hope in Holy Trinity and to the Protection of the Mother of God.  We, as the hierarchs of the Ukrainian Orthodox Church of the United States of America, beg for the sincere and endless prayers of all who read these words or hear them spoken.  We especially appeal to those monastic communities around the world, who pray continuously for mankind to place Ukraine and her people in their hearts and minds during all their prayers.”

Please join the Ukrainian Orthodox community for the commemoration of the 40th day of repose of the heroes of Ukraine on March 29, 2014 at the Metropolia Center of the UOC of the USA in South Bound Brook, NJ!

Media coverage by Voice of America 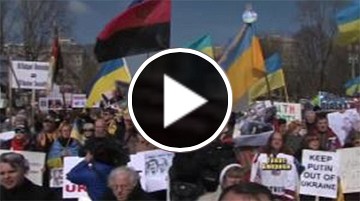 Media Coverage by Voice of America