There are several passages in the New Testament where we hear of the people suffering for an incomprehensibly long period of time - in fact three of them are part of the regular cycle of readings which are taken on Sunday, including the 'Man Born Blind', the 'Woman with the Hemorrhage' (38 years) and the woman made infirm by a demonic spirit for eighteen years.

What Happens When I See Chronic Suffering?

Often, there are two distinct responses we may have when we encounter someone who has been suffering for a long time.

The first is compassion. If we are Christians we feel a tug of compassion inside our hearts - no one enjoys seeing another suffer. This compassion feels right and good for us - we care about the other person and long that they be well. We may pray for her and try to assist in some way.

The second response may well be the opposite - the desire to run away! Seeing such pain and suffering in the body, but especially the face and eyes of those who suffer chronically, can have a draining, exhausting effect emotionally. Just trying to listen to the speech of a person who is very sick can be intensely difficult. The timbre of their voice cuts to the soul. If you spend enough extended time serving people who suffer chronically, it may feel like you're being sucked into an emotional black hole of your own suffering because the suffering has been so intense, for so long. Many caregivers of dementia patients experience profound struggles doing so.

This is compounded all the more, if we roll into that experience, the dark, spiritual undercurrents - which the gospel explicitly describes regarding this woman who suffered a 'spirit of infirmity'. She had been suffering because of direct demonic influence. How many others, whose physical suffering we may see in a way, are also being torn apart inside in a spiritual fight for their soul? St. Cyril of Alexandria, in his homily on this passage, notes that both the physical and the spiritual suffering are a result of the Devil. He says, "The accursed Satan is the cause of human disease, just we affirm that Adam's transgression was his doing, and by means of it our bodily frames have become liable to infirmity and decay."i

So, where might we find such a person today? One place to look is a nursing home or care facility. You don't have to look too hard. The physical afflictions of old age are quite visible and come in countless forms. And what about the crippling paralysis of emotional suffering, and even spiritual suffering due to sin? How many people are bent over in their later years - burdened less by arthritis, but weighed down by haunting memories of the past? How many men of our 'greatest generation' or the Vietnam era suffer chronically because of experiences in war, decades ago. This post-traumatic stress may endure for a lifetime. How much healing is needed by older generations of Ukrainians who experienced the traumas of the Famine, persecution by the Communists and the horrors of World War II? Perhaps we can begin to understand why many people feel as though they never want to 'go to a nursing home', even for a visit, and why we might not want to go either.

When I think about this woman, I cannot imagine what it was like to endure her condition, being 'bent over', not only physically but spiritually, for so long. But if there is one thing I can sense, it is that there is, within this woman, a measure of faith. Why? Because she did not run away, from her own life. To run away is to quit life. It is destruction of oneself - exemplified by suicide. The difference between this woman and Judas Iscariot is that she waited long enough for Christ to find her, to heal her. Most likely, she did not know how her helper would come, what He would look like or how he would do it. Perhaps, she had heard as a child, the words that would sustain her in her suffering. God would be her Helper.

For us, this Psalm is chanted during Great Lent and the Liturgy of Presanctified Gifts as we ponder our spiritual suffering and our sins, we realize that if we have faith, we can endure, until our Helper comes too.

I believe that no one who endures suffering for so long can survive without some measure of inner hope. She suffered for sixteen years, going into seventeen and thinking - maybe this year will be better? But it did not get better - maybe worse(!), and a whole year went by, now seventeen years, and three hundred and sixty four days. Maybe, she thought, during the eighteenth year things would get better! Just hold on a little longer. Help is on the way. Maybe no deliverance came today, but maybe tomorrow. I must not give up. My Help comes. The only way to not be helped is to give up to despair. This kind of Hope, as a gift from God, has a sustaining power to help us endure the darkness of the black hole of suffering. Perhaps, after a while, the count of days and years stopped being important, because she simply knew that the Helper would come when the time was right.

Finally, He comes! He comes to her with the strength of love in His voice. "Woman, you are free of your infirmity!" "Your soul can rise, into the light out of the dark, hellish, pit where you have been confined for these many years. You have suffered, but you have endured - I have come to save you."

Let's Go to the Nursing Home

So let us return to the Nursing Home perhaps, for a visit. Maybe those who are infirm are actually spiritual warriors, engaged in a deep struggle in their hearts as they confront their past and the future? Maybe those vets are fighting the inner battle of their life and they need reinforcements? Perhaps in some small way we can bring a little supply of faith, that our God has come into a darkened world through His Nativity will also come into our own.

Perhaps, if we visit, we will see a light in the eyes of those suffering, the source of which is Christ. It is steady, because there is hope - that soon things will be different. And for some, even if no miraculous event takes place, that the one suffering knows that "in Christ we are more than conquerors." (Rom. 8:37) The Lord is always my Helper. And in this encounter is the experience of love - which raises up the infirm, both physically and spiritually, in small but powerful ways.

Finally, perhaps in that encounter comes the realization to me, that I am really the infirm person, bent over by my own burdens of life, but that Help is on the way. 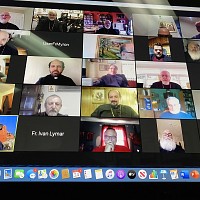 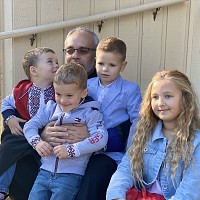