Accompanied by the choir’s spirited singing as led by Director Basil Romanyshyn, His Eminence led the congregation in procession and installation of the holy relics into the altar of St. Mary’s.  As Archpastor and spiritual teacher, he explained that the Orthodox Church is built upon the bones, both literally and figuratively, of its holy martyrs and forbearers, just as Christ instructed Saint Peter, “Upon this rock I shall build my Church.”  So shall each parish contain holy relics to inspire and bless its congregation.  His Eminence continued to explain that holy relics, when transferred from one parish church to another, are carried in procession, similar to the processions of Great Friday and Pascha in tracing the paths of Christ’s own body and those of the myrrh-bearing women.

Blessed with a day of gloriously warm and bright weather, the procession made its way outside St. Mary’s onto the streets of New Britain, making one circle around the church building.  Led by Archbishop Anthony, who held the veiled holy relics of St. Theodore Stratelates above his head, the procession included men, women and children all holding lit candles or banners and flags.  Parishioner Scott Kerry, a Captain in the Westover Air Force Base Fire Department, carried a special candle to represent a solemn aspect of this particular date, September 11th, in honor of the 10th anniversary of the terrorist attacks on American soil.

As the procession wound its way up St. Mary’s front stairs, His Eminence paused to pray before the church’s closed doors.  This portion of the service included a special dialogue between the Archbishop and the people inside, then turning to address the faithful gathered on the stairs and street, he welcomed them back into the church for the final installation.  The choir continued its beautiful singing as His Eminence, with the assistance of Fr. Andrii, Fr. Dcn. Anthony and the seminarians, knelt before the altar to physically install the holy relics of St. Theodore inside of the central pillar of the altar table itself.

His Eminence led the congregation in celebrating Divine Liturgy marking the parish’s 101st anniversary.  At the conclusion of the joyous service, Archbishop Antony described the life of the Great Martyr St. Theodore Stratelates, whose relics now bless St. Mary’s parish family.  In the last days of the Roman persecution in the early fourth century, St. Theodore served as military commander known for his bravery and pious nature, which persuaded many people to accept Christianity.  After deceiving the emperor Licinius by smashing pagan idols and distributing the costly pieces to the poor, the emperor subjected St. Theodore to many tortures including crucifixion.  An angel delivered the pious man from the cross and he was miraculously healed, inspiring even more people to convert to Christianity.  The holy saint then offered himself up to martyrdom by beheading, performing miracles as he walked to his execution.  He is commemorated on February 8th and June 8th.

The calendar date of this celebration, September 11th, also proved to be one of profound commemorations as it marked the 10th anniversary of the terrorist attacks on America.  Archbishop Antony led the congregants in a Panahyda to remember the more than 3,000 souls that perished in those attacks, especially the brave men and women who lost their lives serving in the armed forces in the War on Terror and the selfless individuals known simply as first responders who sacrificed their own lives for the safety of others.  Active firefighter Scott Kerry held the American flag during this moving service as the faithful lined the center aisle of the church with lit candles.

At the conclusion of the services, His Eminence joined the parish for a holubsti dinner in the church hall, which included as its special guests: Fr. Steven Masliuk, St. Mary’s, Bridgeport, Connecticut, UOC Dean of New England; Pani Matka Debbie Masliuk; and Fr. David Koles, pastor of Holy Trinity OCA, New Britain, Connecticut.  The memorable day marked a high point in St. Mary’s parish life as it begins its 102nd year serving Christ and His Church.

Latest News
00000
The Feast of the Naming of the Lord at the Metropolia Center of the Church
00001
St. Sophia Ukrainian Orthodox Theological Seminary Begins Selection of Students for 2021-2022 Academic Year
00002
Archbishop Daniel and Seminarians of St. Sophia Seminary Offer Assistance to the Homeless Population of Detroit Metropolitan Area
00003
Sunday After Nativity of our Lord at the Metropolia Center of the Church
00004
Nativity of Christ Archpastoral Visits to the Parishes of the Western Eparchy of the Church
00005
Nativity/Christmas Divine Liturgy from St. Volodymyr Ukrainian Orthodox Cathedral in Chicago, IL
00006
Nativity Epistle of the Permanent Conference of Ukrainian Orthodox Bishops Beyond the Borders of Ukraine
Pastoral Reflections
00000
Втеча від Ірода — втеча від гріха
00001
Understanding the Nativity Icon
00002
Genealogy
00003
Наближається Різдво...
00004
Про важливість тіла людини
00005
The Healing of the Ten Lepers
Upcoming
00000
Archbishop Daniel's Liturgical Schedule
00001
Order Calendar 2021 / Orthodox Daily Planner
00002
Order Your Copy of 2021 UOC of the USA Calendar
00003
Month of JANUARY in the Life of the Church - Місяць СІЧЕНЬ в житті Церкви
00004
Nativity of our Lord - Seminary CHRISTMAS CD - Order Today!
Recent Galleries 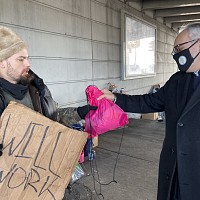