On Tuesday, September 21, 2010 His All Holiness Ecumenical Patriarch Bartholomew received the Officers of the Episcopal Assembly of North and Central America at the Ecumenical Patriarchate in Istanbul. His All Holiness had invited the Officers through the cooperation of Archbishop Demetrios of America, the Chairman of the Assembly, who also led the delegation to the Phanar for the substantive and detailed meeting. The other Officers included Archbishop Justinian of Naro-Fominsk (Moscow Patriarchate, Vice-Chairman), Archbishop Antony (Ukrainian Orthodox Church of the USA, Treasurer) and Bishop Basil of Wichita and Mid-America (Patriarchate of Antioch–Antiochian Archdiocese, Secretary). 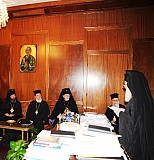 Following a paternal exhortation of His All Holiness, the officers engaged the Ecumenical Patriarch in a full and robust discussion of the work and prospects of the Assembly. Of particular note during the discussion, was the emphasis that His All Holiness put on the Committee structure, and his encouragement to commence the Committee work as soon as possible. He also noted both the size and diversity of the Assembly.

Following the two-hour meeting, His All Holiness hosted the Hierarchs in the Patriarchal Trapeza, together with Hierarchs of the Ecumenical Throne. Following the meal, the Patriarchate arranged for the Officers to visit the famous Churches of Chora and Hagia Sophia, before being hosted again in the evening by His All Holiness for a farewell dinner.