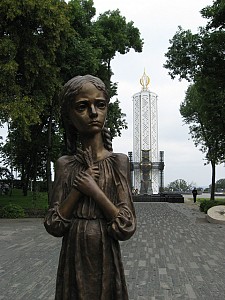 This year we mark 76 years since that terrible tragedy which was experienced by our nation, and we here in the Diaspora honor the memory of its victims.  At this time we find many articles in our press which bear witness to this terrible act.  We read about those who were swollen with hunger and starvation; those who witnessed the death of others; those who saw entire villages of the dead overgrown with weeds; those who saw the dead in the fields, on the highways, in towns on the streets; those who witnessed how corpses were loaded onto carts and taken to be buried in a common grave and of how an old man walked through the village gathering the bodies of dead babies in a sack to take them to the cemetery and give them burial.  For more, click here>

Latest News
00000
Ukrainian Orthodox Word - October Issue
00001
New Publication of the Bilingual SERVICE BOOK of the UOC of the USA (small format)
00002
Oklahoma Orthodox Clergy Association Met with the Hierarch of the UOC of the USA
00003
Archpastoral Visitation of the Formation of the Birth-Giver of God Ukrainian Orthodox Parish in Jones, Oklahoma
00004
95th Anniversary of St. Vladimir Ukrainian Orthodox Cathedral and the Feast of the Protectіon of the Mother of God
00005
2021 Annual Clergy Conference Took Place via Zoom Platform
00006
A Group of Seminary Students Visit St. Sophia Seminary Library
Pastoral Reflections
00000
Свято Покрова Пресвятої Богородиці
00001
Protection of the Mother of God
00002
Люби свого ближнього, як самого себе
00003
Two Commandments for Our Times
00004
Elevation of the Life-Giving Cross
00005
Виноградарі
Upcoming
00000
Archbishop Daniel's Liturgical Schedule
00001
Month of OCTOBER in the Life of the Church - Місяць ЖОВТЕНЬ в житті Церкви
00002
Prayer for the Youth - Молитва за Молодь
00003
YOU CAN HELP YOUR CHURCH: Make a donation to support the Ministry of the Ukrainian Orthodox Church of the USA
00004
Order Calendar 2022 / Orthodox Daily Planner
00005
Pre-order your 2022 Calendar - Замовляйте ваш Календар 2022
Recent Galleries