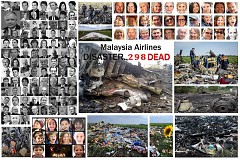 The Embassy of Ukraine together with the Ukrainian community of Australia held a very moving ceremony to commemorate the victims of MH17 at national memorial in Canberra, Australia on July 19, 2019 - commemorating 298 people that were killed by Russian terrorist attack, while downing the Malaysian flight 17 over Eastern Ukraine on July 17, 2014: most of those on board the Boeing 777 were Dutch, but others came from 17 countries, including 38 Australians.

In her remarks Charge d`Affares of Ukraine in Australia, Mrs. Halyna Yusypiuk underlined that the MH17 monument is set in soil brought back from the crash site by an Australian police officer, that from the very beginning, Ukraine has cooperated in the investigation and that Australian Ukrainians personally have shared the tragedy of victim's families.

Mrs. Yusypiuk noted that five years on and the sky over Eastern Ukraine is still closed to flights. And despite the JIT report, MH17 families are yet to hear words of regret and recognition from Russia which took the lives of their loved ones.

"We pray for a day when the war in Ukraine will end and they will be able to visit the crash site and walk around the sunflower fields", said the diplomat.

Co-chair of the AFUO Mr Stefan Romaniw called for coordinated efforts to bring to account those responsible for the MH17 downing and for justice and memory eternal for MH17 victims.

Children from the Ukrainian community of Canberra, Katia Lewis, Polina and Alex Trukhanov laid a wreath of flowers containing 38 sunflowers at the monument, one sunflower for each Australian life lost.

5 Years Later.... The Ukrainian-Australian Community Commemorates the Tragic Loss of Life - Downing of the Malaysian Flight 17

Latest News
00000
HALKI SUMMIT IV - “COVID-19 AND CLIMATE CHANGE: Living with and Learning from a Pandemic”
00001
Metropolia Center of the UOC of the USA Participates in the National Moment of Unity and Remembrance of COVID-19 Victims
00002
Celebration of the Glorious Feast of THEOPHANY (Baptism) of our Lord and Savior Jesus Christ
00003
Sunday Before Theophany at the Metropolia Center of the UOC of the USA
00004
The Feast of the Naming of the Lord at the Metropolia Center of the Church
00005
St. Sophia Ukrainian Orthodox Theological Seminary Begins Selection of Students for 2021-2022 Academic Year
00006
Archbishop Daniel and Seminarians of St. Sophia Seminary Offer Assistance to the Homeless Population of Detroit Metropolitan Area
Pastoral Reflections
00000
Іван Хреститель - Голос Вопіющого в Пустині
00001
On the Baptism of Christ
00002
Втеча від Ірода — втеча від гріха
00003
Understanding the Nativity Icon
00004
Genealogy
00005
Наближається Різдво...
Upcoming
00000
Archbishop Daniel's Liturgical Schedule
00001
Order Calendar 2021 / Orthodox Daily Planner
00002
Order Your Copy of 2021 UOC of the USA Calendar
00003
Month of JANUARY in the Life of the Church - Місяць СІЧЕНЬ в житті Церкви
00004
Nativity of our Lord - Seminary CHRISTMAS CD - Order Today!
Recent Galleries