As millions of Orthodox Christians around the world prepared to enter into the Sacred Period of Great Lent leading to the greatest miracle in the history of humanity – our Lord’s Glorious Resurrection, hundreds of Orthodox Christians from across the New York Metropolitan area were flocking to a Metropolia Center of the Ukrainian Orthodox Church of the USA in South Bound Brook, NJ on Saturday, February 25, 2017 to see what they believe to be a different miracle.

Assisted by over 20 priests from various Orthodox parishes in the area His Eminence Archbishop-elect Daniel, welcomed the arrival of Kardiotisa, “The Tender Heart” myrrh-flowing, miraculous icon of the Virgin Mary into the midst of about six hundred people of St. Andrew Ukrainian Orthodox Memorial Church (South Bound Brook, NJ), who flocked to the Spiritual Center of the UOC of the USA throughout the day.

Fr. Mark Leisure, the pastor of St. George Orthodox Church in Taylor, PA delivered the icon into the hands of Vladyka Daniel, who immediately removed his miter in order to venerate the sacred image of the Birth-Giver of God. Numerous faithful in attendance partook in the Holy Mystery of Eucharist, while receiving another blessing of the day – the ability to learn about the Myrrh-streaming icon and to touch it with their lips.

In his sermon, Archbishop Daniel reflected upon the call to holiness, while encouraging people not only to observe the miracle of the icon but by partaking and learning from the miracle, and enabling each other to be the examples of holiness.

Before the faithful had a chance to venerate the icon, Fr. Mark shared a few powerful accounts of the miraculous wonderworking icon.

...A man had a massive heart attack while in the church. Two nurses who were present rushed over to him and began to do CPR, while others called 911. As the nurses tried to revive him, he showed no pulse, stopped breathing and actually died. While waiting the few minutes for the ambulance to arrive, Fr. Mark took the Kardiotisa, “The Tender Heart” myrrh-flowing, miraculous icon of the Virgin Mary and held it over the man so that the fragrant myrrh would drip from the icon onto the chest of the man. Immediately, the dead man took a deep breath, opened his eyes, and began singing “Mary, Mother of God Save Me.” By the time the paramedics arrived, he was sitting up and didn’t think he needed to go to the hospital, even though they insisted that he get checked…

…The doctor at the Sloan Kettering Cancer Center tells the woman she has Stage 4 cancer, and there is no treatment that will help her condition. They tell her that they can control her pain, but she has little time to live. With little hope, she leaves the hospital. Yet a friend anoints her with the fragrant myrrh flowing from the Kardiotisa icon. She is miraculously healed. The next time she goes to the doctors and gets checked, they are puzzled and amazed that there is no trace of her cancer…

Over the past three years, these miracles have happened again and again – with people finding healing from prostrate cancer, liver cancer, throat cancer, lung cancer, brain lymphoma, and almost every other form of cancer. There is even one oncologist who now, along with his medical treatment, directs his patients to visit the St. George Orthodox Church in Taylor, PA and be anointed by this miraculous myrrh.

One man had a ruptured brain aneurism. While in the hospital’s ICU, he was in a coma with no hope for recovery. The doctors told the wife and family to say their goodbyes. A friend of the family knew a priest who had seen the Kardiotisa icon and had a cotton swab with the myrrh. He came and anointed the man, and the man awoke from the coma, healed. The doctors couldn’t explain what happened, and said it was truly a miracle.

A woman couldn’t see through her pregnancies. Four times she became pregnant, only to have her baby miscarried at a particular point in the pregnancy. There was a problem where the stem that connected the spinal cord and the brain, and this caused the miscarriage. During her fifth pregnancy, before she went to the doctor for an ultrasound, she was anointed with holy myrrh from the icon. In the ultrasound picture, which we all saw, there was an obvious light that had connected the brain with the spinal cord. The doctor and nurses said they had never seen anything like this before. The woman gave birth to a healthy child.

A young boy is rushed to the hospital with a 105 temperature. There is swelling of the brain and nothing seemed to be working to lower his temperature. His grandmother remembered that she had an old cotton swab from the miraculous icon in her purse. When she pulled it out, it was dry. And yet, she took it and tried to anoint her grandson, asking for the Virgin Mary’s intercession. Shortly thereafter, the boy’s temperature broke and he sat up. The next day, she took out the cotton swab again, and discovered that it was now soaked with myrrh and had even formed itself into a heart.

A young 14 year old girl had tried to commit suicide several times, and fallen into utter despair because of the bullying, ridicule and pain she experienced at school. While at Camp Nazareth, a Church Camp outside of Pittsburgh, she encountered the grace of God through this miraculous icon, and found inner healing and hope. Months later she wrote the most beautiful four page letter to Fr. Mark, which he read to us, describing how her life has turned around by her experience with the Kardiotisa icon.

Every Wednesday night for the past three years, Fr. Mark and his community in Taylor, PA have a special prayer service to the Virgin Mary in front of this icon. Every Monday night, Fr. Mark has a Questions and Answer session in his church. Hundreds and hundreds come every Wednesday. Several dozen come on Mondays, asking questions. One stranger began to attend on Mondays, and at one point stood up and said, “These icons in the Church are against Allah. They are idolatry.” He argued that Allah was not pleased with these icons. After attending for a few weeks, this man from Iran finally approached the icon. Fr. Mark admitted that everyone was tense because he wasn’t sure what the man was going to do. Over the past three years, Fr. Mark has seen someone pull out a knife and try to stab the icon; others have tried to smash it; some have spit on it; and one person even vomited over the protective case. The man from Iran approached and stood motionless in front of the icon covered with fragrant myrrh. Fr. Mark said the man was like in a trance, and it seemed like a battle was going on in his mind. Slowly a tear formed in his eyes, and he began to cry. He kissed the icon. As he walked out of the church, he stopped by the candle stand and wrote something in the sand in Arabic. Since no one could read Arabic, the priest took a picture of what he wrote and got someone to translate it. The man wrote, “Jesus Christ is Lord.” Several months later this man was baptized and is now a pious Orthodox Christian.

These are only a few of the wonders and miracles that were shared with those in attendance by Fr. Mark, his pani-matka and two subdeacons. In conclusion of the service, Archbishop Daniel presented Fr. Mark with the icon of Venerable Agapit, the Healer of the Monastery of Kyiv Caves in Ukraine, while Fr. Mark held up the Myrrh-Streaming icon and having gathered all the children in attendance, allowed the myrrh to drip from the icon into the hands of each child. Imagine, this icon of wood has been continuously overflowing with myrrh for three years!

Our God is a God of wonders and miracles. He is not bound by the very laws of nature, which He Himself has established. Sometimes in our contemporary, secular and materialistic world we try to insist that science and reason are the only source of truth. The Church honors and appreciates science and reason, yet we know that the Creator of all stands above all. We can never try to limit or keep God confined within our own boundaries. The miracle of the Kardiotisa icon is just one small example of the unfathomable mysteries of life and of the Creator of Life, God Himself! Sometimes we can only observe in awe and wonder, and give glory to God for the way He reveals His majesty!

Myrrh-Streaming Icon at the Metropolia Center

Latest News
00000
Archbishop Daniel Blesses New Dome for St. John the Baptist Ukrainian Orthodox Parish in Sharon, PA
00001
29 August, 2021 - Join us for the Celebration of the 30th Anniversary of Ukraine’s Independence
00002
УПЦ США взяла участь у Міжнародному Cаміті з Питань Релігійної Свободи у Вашингтоні
00003
Assembly of Bishops: Encyclical for Prison Ministry Awareness Sunday - 25 July, 2021
00004
Saints Peter and Paul Parish Family in Palos Park, IL Celebrates Yet Another Successful Year of Service to God and His People
00005
UOC of the USA is Blessed With a New Priest - Fr. Mykola Zomchak!
00006
UOC of the USA Participates in the International Religious Freedom Summit in Washington, DC
Pastoral Reflections
00000
Two Demon-Possessed Men Healed
00001
Св. Князь Володимир і Хрещення Русі-України
00002
Зцілення сотникового слуги
00003
Шукайте Царства Небесного
00004
The Feast of Saints Peter and Paul: A Lesson for Healing the Divisions among Us
00005
Вірою царства вони перемагали
00006
Sunday of All Saints of Ukraine – What is the Purpose for this Sunday?
Upcoming
00000
Archbishop Daniel's Liturgical Schedule
00001
Order Calendar 2021 / Orthodox Daily Planner
00002
All Saints Camp for Adults - Aug. 6-8
00003
Month of JULY in the Life of the Church - Місяць ЛИПЕНЬ в житті Церкви
00004
Prayer for the Youth - Молитва за Молодь
00005
YOU CAN HELP YOUR CHURCH: Make a donation to support the Ministry of the Ukrainian Orthodox Church of the USA
Recent Galleries 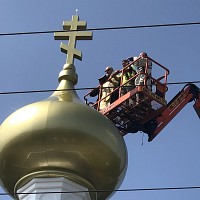 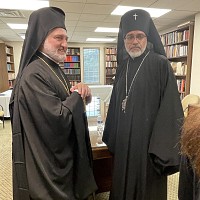