The Assembly of Canonical Orthodox Bishops of the United States of America will hold its sixth annual meeting at the Hilton Chicago O’Hare Airport Hotel here September 15-17, 2015.

This year’s meeting will include two sessions devoted to canonical regional planning. In the first of these sessions, the Assembly’s 12 jurisdictional first hierarchs will have an opportunity to offer their comments on a proposal that has been prepared by the Committee for Canonical Regional Planning for submission to the Great and Holy Council in 2016. In the second session, the Assembly’s hierarchs will engage in a facilitated discussion about the proposal. This year’s meeting also includes a working session on pastoral practices of marriage and divorce. 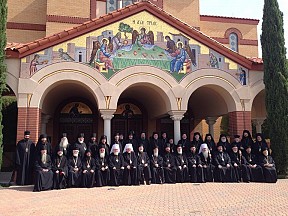 On Tuesday evening, September 15, the Assembly will sponsor a pan-Orthodox youth gathering for high school and college students in the Chicago area at Holy Resurrection Serbian Orthodox Cathedral, 5701 North Redwood Drive, Chicago. The program will open with a welcoming orientation at 6:00 p.m. and close at 10:00 p.m.

The agenda for Assembly VI and a flyer for the youth gathering are available in PDF format. The hierarchs of the Assembly request the prayers of all clergy, monastics, and laity for a spiritually fruitful meeting.