The year of our 2013 marks 80th anniversary of Holodomor-Genocide 1932-1933, and there is no better way to show how much the Ukrainian-American community of the United States of America thinks of all the victims of Genocidal Famine than to set a foundation for a monument in their memory. With hope and anticipation millions of people, Ukrainians and not only, dreamed to see the day when Holodomor Memorial Groundbreaking ceremony would take place. Holodomor-Genocide was a terrifying act committed against Ukrainian nation.

With hope and anticipation millions of people, Ukrainians and not only, dreamed to see the day when Holodomor Memorial Groundbreaking ceremony would take place. Holodomor-Genocide was a terrifying act committed against Ukrainian nation.

Tuesday, December 4, 2013 was a cold windy day in Washington DC, but the bright sunshine and clear blue skies welcomed a crowd of Ukrainian-Americans and dignitaries from the Federal government, foreign diplomants and Ukraine for the groundbreaking ceremony of the site of the National Holodomor Memorial, located at a prime location – the intersection of North Capitol Avenue, Massachusetts Avenue, and F Street, just a few blocks away from the Capitol Building and Union Station, a high-visibility location granted by the National Park Service.

The Embassy of Ukraine in the United States of America and the U.S. Holodomor Committee hosted the groundbreaking ceremony at the memorial site. Michael Sawkiw, who is Chairman of US Committee for Ukrainian Holodomor-Genocide Awareness 1932-1933 hosted the program.

Seven years ago, on October 13, 2006, President George W. Bush signed HR562, sponsored by Rep. Levin, which granted the opportunity to erect a memorial to the victims of the Holodomor, a devastating, politically-engineered famine in Ukraine, on federal land in the District of Columbia. On October 2, 2008, the present site was officially designated at a hearing of the National Capital Planning Commission (NCPC). In September 2012, final design plans of the “Field of Wheat” concept were approved by the Commission of Fine Arts and NCPC. The Holodomor Memorial was designed by Ukrainian American architect Larysa Kurylas.

The building of the long-awaited Ukrainian Holodomor Memorial in Washington in remembrance of the millions of Ukrainians who died in Stalin's 1932-33 famine-genocide was launched December 4 with the symbolic groundbreaking ceremony at the site carried out by eight individuals and representatives of organizations instrumental in the successful achievement of this goal: Robert Vogel, superintendent of the National Mall and Memorial Parks; Larysa Kurylas, designer and sculptor of the monument; U.S. Representative Marcy Kaptur (D-Ohio); Ukrainian Ambassador Oleksandr Motsyk; Michael Sawkiw, of the U.S. Committee for Ukrainian Holodomor-Genocide Awareness; Anthony Fisher, representing Ukrainian businessman Dmytro Firtash, the major funder of the memorial; U.S. Rep. Sander Levin (D-Mich.), sponsor of the Holodomor Memorial bill in Congress; and Oleksandr Severyn, 91, from the Bronx, NY, a Holodomor survivor.

In his speech, Ambassador of Ukraine O.Motsyk emphasized: "I am sure that in the fall of 2014 Washington, DC will be enriched by a new important Memorial, symbolizing triumph of truth and justice. The monument that we’re going to erect here, in the heart of Washington, DC will warn the mankind so that such atrocities could never ever happen again in the world."

Moreover, members of Estonian Parliament Marko Mihkelson (Head of Foreign Affairs Committee) and Mati Raidma (Head of National Defense Committee) as well as Ambassador Marina Kaljurand participated in the Groundbreaking Ceremony of the Holodomor Memorial commemorating the victims of the Ukrainian Famine of 1932-1933.

We have gathered today to remember the Holodomor, the tragic time in Ukraine history that stands as a reminder to us all that history is not to be forgotten and we have to speak on behalf of those who can’t speak themselves. World was silent in 1933 and nobody spoke on behalf of millions of Ukrainians and other nations.

As a Nation, Estonians experienced similar events 20 years later, although on a lesser scale. Together with Ukrainians, Lithuanians and many other nationalities we shared the sad history of being under totalitarian regime for more than 50 years. Therefore, we know what that meant to the Nation and its people.

The Holodomor is and will stay in our minds as a warning. We have to remember what horrific effect totalitarianism has had and still has on people, what suffering it has brought. And we still have to take efforts to avoid the recurrence of similar catastrophes in the future.

I have visited the Memorial to the Victims of the Holodomor in Kiev. I will never forget the sculptures of grieving angels and the girl with spikelet. I will never forget the heartbreaking stories told by survivors. I had the opportunity to listen to Holodomor survivor and teacher NICHOLAS MYKOLA LATYSHKO who has written a poem about Holodomor dedicated to his Mother. I would like to read some lines from the poem:

And after all the aches and torment

We came to life again once more

Our Ukraine again had risen

We shall not suffer any more

Dear friends, I would like to thank and recognize the Embassy of Ukraine, the US Committee for Ukrainian Holodomor-Genocide Awareness for the initiative and hope that soon we can gather here at the Holodomor Memorial to commemorate the victims of the Holodomor.

I would like to light the white candle remembering all the victims, because UKRAINA PAMJATAE, SVIT VIZNAE - Ukraine remembers, the world acknowledges." (as written by Yaro Bijhun... “Ukrainian Weekly”)

The day concluded with chanting of religious hymns, beseeching the Almighty God to bless the ancestral homeland Ukraine and the United States of America.

Latest News
00000
Ukrainian Orthodox Parish in Spring Valley, CA Celebrates 60th Anniversary of Ministry
00001
Patriarchal Encyclical For The Feast of The Holy Physicians
00002
Ukrainian Orthodox Word - October Issue
00003
Prayerful celebration of the feast of the PROTECTION of the BIRTH-GIVER OF GOD in the Spiritual Center of the Church
00004
New Publication of the Bilingual SERVICE BOOK of the UOC of the USA (small format)
00005
Oklahoma Orthodox Clergy Association Met with the Hierarch of the UOC of the USA
00006
Archpastoral Visitation of the Formation of the Birth-Giver of God Ukrainian Orthodox Parish in Jones, Oklahoma
Pastoral Reflections
00000
The Widow from the City of Nain
00001
Неділя отців 7-го Вселенського Собору
00002
Свято Покрова Пресвятої Богородиці
00003
Protection of the Mother of God
00004
Люби свого ближнього, як самого себе
00005
Two Commandments for Our Times
00006
Elevation of the Life-Giving Cross
Upcoming
00000
Archbishop Daniel's Liturgical Schedule
00001
Month of OCTOBER in the Life of the Church - Місяць ЖОВТЕНЬ в житті Церкви
00002
Prayer for the Youth - Молитва за Молодь
00003
YOU CAN HELP YOUR CHURCH: Make a donation to support the Ministry of the Ukrainian Orthodox Church of the USA
00004
Order Calendar 2022 / Orthodox Daily Planner
00005
Pre-order your 2022 Calendar - Замовляйте ваш Календар 2022
Recent Galleries 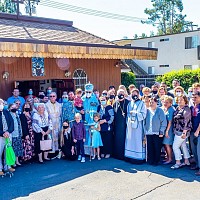