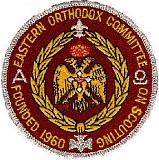 Scout Sunday will be observed this year on February 6. It is always observed on the Sunday immediately preceding the 8th of February, unless the 8th falls on a Sunday.

The observance of Scout Sunday tradition was started years ago to make people in the Church aware of Scouting, and to allow Scouts to live out of what is pledged each week, The Scout Law says that a “Scout is Reverent” and the Scouts of all ages promise to do their “Duty to God”. These values strengthen youth character in their family, community and faith.

In 1960, the Standing Conference of Canonical Orthodox Bishops in the Americas [SCOBA] created and endorsed the Eastern Orthodox Committee on Scouting [EOCS] as part of their youth ministry.  This was the first agency created by SCOBA

The EOCS Executive Board encourages all Eastern Orthodox Churches to recognize and celebrate this Boy Scout Centennial even if their church does not sponsor a Scout unit.

If your parish sponsors a Scout unit have them arrive in full uniform.

If the church does not have a Scout program, have the Scouts come in uniform.  Many priests are aware of Scout Sunday and will discuss Scouting at some point of the service

Have the uniformed Scouts serve at the candle table in the narthex, serve as Ushers, help pass the collection tray, help serve during the coffee hour, or follow any suggestions from the parish priest.  Eastern Orthodox Religious Scout Awards maybe presented on this day and the scouts can organize a Scout Display and recruitment event.

For further information on EOCS and on the Observance of Scout Sunday call George Boulukos at (516) 868-4050 or email geobou03@aol.com.

The Episcopal Assembly of Orthodox Bishops of North and Central America has appointed His Grace Bishop Daniel, the ruling hierarch of the Western Eparchy of the Ukrainian Orthodox Church of the USA as the Episcopal Liason for the Eastern Orthodox Committee on Scouting [EOCS].

Latest News
00000
Patriarchal Encyclical For The Feast of The Holy Physicians
00001
Ukrainian Orthodox Word - October Issue
00002
Prayerful celebration of the feast of the PROTECTION of the BIRTH-GIVER OF GOD in the Spiritual Center of the Church
00003
New Publication of the Bilingual SERVICE BOOK of the UOC of the USA (small format)
00004
Oklahoma Orthodox Clergy Association Met with the Hierarch of the UOC of the USA
00005
Archpastoral Visitation of the Formation of the Birth-Giver of God Ukrainian Orthodox Parish in Jones, Oklahoma
00006
95th Anniversary of St. Vladimir Ukrainian Orthodox Cathedral and the Feast of the Protectіon of the Mother of God
Pastoral Reflections
00000
Свято Покрова Пресвятої Богородиці
00001
Protection of the Mother of God
00002
Люби свого ближнього, як самого себе
00003
Two Commandments for Our Times
00004
Elevation of the Life-Giving Cross
Upcoming
00000
Archbishop Daniel's Liturgical Schedule
00001
Month of OCTOBER in the Life of the Church - Місяць ЖОВТЕНЬ в житті Церкви
00002
Prayer for the Youth - Молитва за Молодь
00003
YOU CAN HELP YOUR CHURCH: Make a donation to support the Ministry of the Ukrainian Orthodox Church of the USA
00004
Order Calendar 2022 / Orthodox Daily Planner
00005
Pre-order your 2022 Calendar - Замовляйте ваш Календар 2022
Recent Galleries